fifteen-year-olds have a place in this world. i have no problem with them serving me food at an eatery, or bagging my groceries, but i don’t want them performing my brain surgeries, and i don’t want them in charge of my entertainment.

it’s great that he wrote this so young, really. but it exhibits every weak writing mistake you would expect from someone so inexperienced: clumsy dialogue, continuity errors, oddly specific details that are stressed but serve no purpose. none of the characters were well-developed, the idea of cause and effect seemed…unfamiliar, there were many scenes i just straight up did not understand. and the same exact word-palette as twilight—do people really grit their teeth so much?? and clench their jaws?? don’t let the orthodontists win!!

and i think some of the scenes were supposed to be funny, but they were like listening to that guy you work with; the one you think might be a little touched, make a joke and you feel all small and trapped and you force that laugh, but inside you feel violated.

so i was in a bar last night, and i was just alone, drinking beer and killing time until i was going to meet up, and this lady comes in with a baby. and she’s drinking her beer, laughing with her friends, and the baby is SCREAMING. it hates the bar. and this makes me hate the bar. and that’s what this book is like—the baby has no business being in a bar, and some teenager has no business ruining my love of reading dystopian fiction.

on the one hand i feel bad talking shit about some kid’s writing. but, in my defense, had i found his diary or his school notebook and read it, i probably* wouldn’t be making as much fun of it. but seriously, TOR, are there no full-grown writers?? what’s george r r martin doing right now?? i have heard some fans that might be interested in another book from that direction…

ugh, can i bitch some more, or do you have plans? that final fight sequence?? what the fuck kind of baz luhrmann/julie taymor fighting scene was that? they have their swords in the fields and the petals are falling colorfully all around them, then suddenly they are in a fountain and the spray is going everywhere?? now they are on a subway?? this is an ambitious music video, but a shitty way to end a book.

and maybe that’s the problem—maybe this would be a good video game, but nothing is developed well enough to make it work as a novel. in the golden age of video games, some of the old skool atari games came with little comics. this one was the best:

and no one has ever learned how to advance in the game, or determine its purpose, but i did play it a lot, blindly going through doors, unsure what was expected of me… 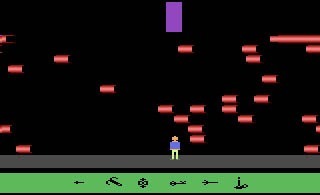 i mean, how much clearer could it be?? : 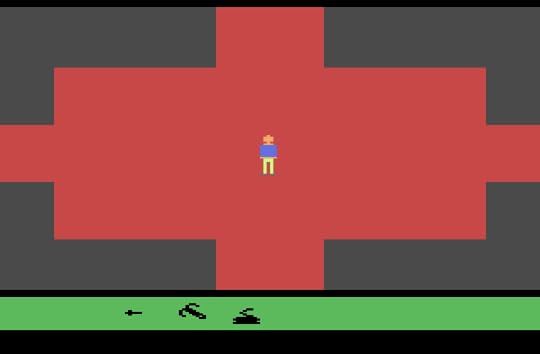 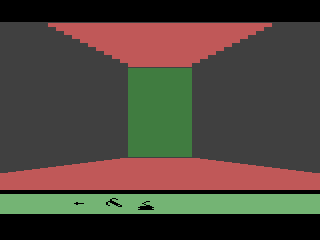 but the comic that came with it—that i loved. and i would actually curl up with it and be transported to the Land of the Zodiac where the gemini twins battled taurus or whatever…i don’t know where i am going with this, only, that if i had read that swordquest video game comic as a novel, it would probably have been disappointing.

also—i just remembered—there is a fight scene in the library, too, where they throw books at each other and destroy many of them. NO FIGHTING IN THE LIBRARY!!!!

* i don’t know who i am kidding with this. i would probably be even worse. i am a dick.