Travels with Charley: In Search of America by John Steinbeck
My rating: 4/5 cats

dude, steinbeck is so much better than kerouac.

and i know that is a totally obvious statement, but if i want to read a story about a man traveling across america and describing his findings, it is going to be a man with a varied vocabulary, a keen eye for detail, and some powers of interpreting his experiences. john, i am listening…

this is my first nonfiction from steinbeck, and i am impressed with how conversational it reads. he has a real skill in making his experiences near-visible to the reader, in both his physical descriptions and his musings about what an “american” is. i feel like he would be a fantastic road-trip companion, and i envy charley.

and that is another thing. when it comes to dogs, i am completely breed-ist. there are dogs that i love, and then there are dogs i think should be banned from breeding, so i don’t have to see them ever again. poodles are among these breeds. they are the silliest of all dogs, and how a man’s man like steinbeck could travel across the country with one of them baffles me.

this is not a dog, it is an aberration: 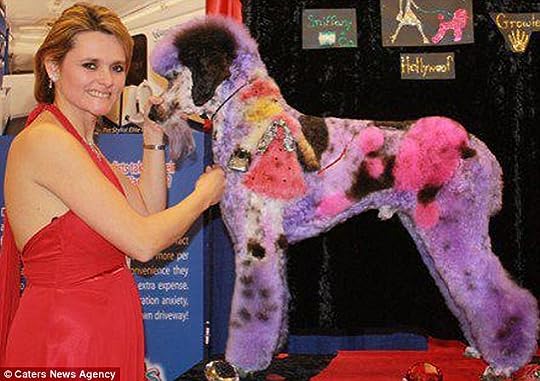 but, for steinbeck’s sake, i can read about a poodle for a little while, and it is sweet how they bond with each other. but i still think they are ugly and not “real” dogs.

steinbeck misses out on an investment opportunity:

If I were a good businessman, and cared a tittle for my unborn great-grandchildren, which I do not, I would gather all the junk and the wrecked automobiles, comb the city dumps, and pile these gleanings in mountains and spray the whole thing with that stuff the navy uses to mothball ships. At the end of a hundred years my descendants would be permitted to open this treasure trove and would be the antique kings of the world. If the battered, cracked, and broken stuff our ancestors tried to get rid of now brings so much money, think what a 1954 Oldsmobile, or a 1960 Toastmaster will bring – and a vintage waring mixer – lord, the possibilities are endless! Things we have to pay to have hauled away could bring fortunes.

of course he is being facetious here, but i for one would kill for some vintage appliances – in another life – in a better apartment – i would have a fantastic kitchen filled with these old timey kitchen things, and i curse steinbeck for not giving a tittle.

steinbeck does not get sucked into revisionist nostalgia:

Even while I protest the assembly-line production of our food, our songs, our language, and eventually our souls, I know that it was a rare home that baked good bread in the old days. Mother’s cooking was with rare exceptions poor, that good unpasteurized milk touched only by flies and bits of manure crawled with bacteria, the healthy old-time life was riddled with aches, sudden death from unknown causes, and that sweet local speech I mourn was the child of illiteracy and ignorance. It is the nature of a man as he grows older, a small bridge in time, to protest against change, particularly change for the better. But it is true that we have exchanged corpulence for starvation, and either one will kill us.

i am so glad my real-world book club finally chose something i can review on here instead of just a short story or an essay or a poem…and this time, i will have something to add! they are all european intellectual types, with their tales of berlin and ukraine and their war stories (as both witness and participant) and i just sit there and drink my wine and play the role of “very good young listener.” thank you, steinbeck for giving america some street cred and fodder for booktalks!