The Salt Line by Holly Goddard Jones
My rating: 4/5 cats

it’s rare for me to have no idea how i feel about a book, but here we are.

this is a good book, it’s occasionally a great book, and it kept me entertained and surprised throughout despite some bumps in my reading road.

if that’s all the review you need, god love ya. i’m gonna fill up the rest of this space with all sorts of of thinking-out-loud and reaction-processing and you’re all invited to hang out if that’s fun for you, OR you can just go read sh3lly’s review, which gave this book ALL THE STARS and is very persuasive.

so, first, the easy stuff. i snatched this book from the free shelves at work because the cover is great and because the idea of disease-carrying/world-ending ticks is such shivery good fun for me. i don’t even think i read the whole synopsis before grabbing this thing, so when the plot started to shift, i was completely surprised.

here, i shall quote a really long passage detailing what the ticks in this book are all about:

”The bite of a pregnant female miner tick releases a numbing agent, which allows her to work without detection. The burrowing appendage, which is called the horn, is corkscrew shaped. The female essentially drills into your skin, pulling her body behind her into the opening. This takes less than half a minute.

By the time you feel the itching, the female miner tick has created a tiny cavity under your skin and settled into place. I cannot stress to you enough the importance of quick action here. Within a few minutes, the female will start releasing eggs into the cavity. The eggs are each the size of a pinprick. They can’t move on their own, but they’re covered in a fibrous coating, which makes them exceptionally sticky, like burrs. They spread out quickly and can even enter the bloodstream.”

“If the itching stops, you’re fucked. The female has died, and the eggs have scattered. Over the next several hours, the area around the bite will erupt in hundreds of pustules. Depending on where the eggs traveled, and if evacuation occurred near a vein, eruptions can occur all over the body, and even in vital organs. The itching will return and become almost unbearable. If you don’t scratch the pustules open yourself to try to sooth the itch, the miner ticks will eventually tear their way out.” 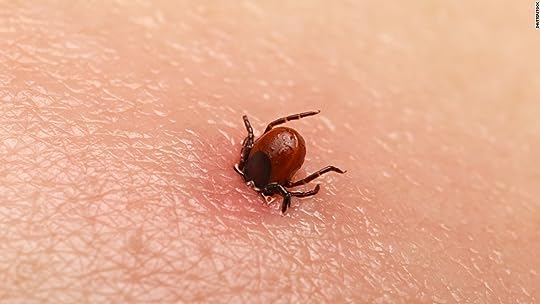 and that’s just the best-case scenario. if that burrowing tick is carrying the dreaded shreve’s disease, the human/tick incubator will be dead within days, after paralysis and having to watch hundreds of baby ticks explode with glee out of their own pustule-covered body.

this, friends, this is why i read books.

it’s such scary, buggy awesomeness. i also want to read this: Containment, which has the same general premise, but looks like more of a breezy action book than a literary exploration of the sitch.

because this book is definitely a literary treatment, not the LOOK OUT FOR BUGGAS kind of slant that something like The Hatching provides. it’s compared to both Station Eleven and California, and all three are all post-event stories centered around survival, but The Salt Line is a much closer match to California. Station Eleven is very much about the broad scope of humanity and cultural legacy and community, while this one and California are more narrowly focused on the experiences of individuals within the wasteland. alliances exist and new alliances form throughout the story, but even when characters are emotionally connected here, they are still very much alone and their decisions and motivations are frequently withheld from other characters.

like California, there’s also a particular emphasis on motherhood, whether it’s biological, informally adopting an orphan, situationally maternal relationships, characters undergoing fertility treatments or who have chosen abortion, as well as some insight on the new-world regulations for that particular option.

and for the first 3/4, it was pretty fantastic: i loved the dread of a life-ending threat being contained within such a tiny, easy-to-overlook creature (and lemme just say – i brought this book with me when i was visiting my dad deep in the woods of maine, which i assume are teeming with ticks, hoping my surroundings would make it even more terrifying), i loved the tension of relying on the reflexes, bravery and general competence of one individual (who might be a complete stranger, in the case of marta and wes), to intervene if a tick went a-burrowing inside of you, i loved many of the twists and reveals and even though it wasn’t the “survival in the wilderness” story i’d anticipated, i was digging what it was becoming, and i definitely appreciated june who was like a badass deanna monroe in my mind

and yet, for all that i did enjoy, i had a hard time following some of the later developments and i got tangled up in the various plots and counterplots. not so much in terms of “what happened,” but more in the necessity of these things happening – the motivation behind them. one of these “things” was a disproportionately destructive reaction to an easily-subdued threat, and in a world with so little left, it seems unlikely that someone who had survived/flourished under such extreme circumstances for so long would have been so successful without considering the long game. i’m dancing around all the nouns right now, but there were a couple of things like that particular vague example that had high-dramatic value but weren’t all that logical, so i got all caught up in trying to follow the cause-and-effect line, which pulled me out of simply enjoying the book.

but i guess not enough to ruin it for me, so i’m going to rest on my four-star cat rating because star rating precision never troubles me too much, and i tend to give out a lot of four-stars cats as a result.

this is a lowish four, if anyone’s doing the math on it.

oh, man – this book is getting CRAAAAZZYYYY. but awesome. i wish i wasn’t about to fall asleep so i could read all night long…