The Party Upstairs by Lee Conell
My rating: 4/5 cats

conell’s debut is a contemporary spin on the upstairs/downstairs trope; a novel set in an upscale upper west side co-op where, over the course of a single day, the tensions resulting from several small conflicts between the building’s residents and martin, its super, will escalate from “simmering” to “explosively boiling over everywhere,” culminating in a class-clash confrontation on the building’s rooftop, one many years in the making. <—the confrontation. but maybe also the rooftop, who knows?

recently returned to her parents’ nest after a breakup, martin’s 24-year-old daughter ruby is unemployed, deeply in debt, and—her university background in art history with a specialization in dioramas—professionally adrift.

throughout her childhood, ruby roamed freely between her family’s tiny basement apartment nestled in with the other rough working parts of the building all the way up to her best friend caroline’s penthouse, stopping somewhere in the middle to visit with the delightfully marxist lily, who dispensed wisdom and sass from her rent-controlled apartment until her death. crossing the upstairs/downstairs divide—literally and figuratively—for so long has given ruby loyalties to both sides, left her influenced by both ‘worlds,’ yet she’s unable to belong to or really be understood by either of ‘em.

ruby’s always had a weirdish proximal relationship to wealth—her father’s job afforded her the opportunity to live in a nice neighborhood and a fancy building whose tenants depended on him to fix a thing or unclog a thing, all the while politely pretending to ignore their class differences with great shows of faux-deference or camaraderie. being friends with caroline also blurred some lines, and ruby’s grown up aware of but not fully appreciating the gulf o’economic disparity between the tenants and her family, socializing and dating within a rarified circle of trust fund kids cushioned by their family wealth, enjoying her careless college (and then post-college) years killing time as a barista, realizing too late how precarious her financial situation is.

there’s a real disconnect here between the wealthy and the working; tenants who are well-off and want to be seen as above it all; cheerfully indulgent and overfamiliar with ‘the help,’ but also clueless enough to think it’s appropriate to pay for services with starbucks gift cards, to make unreasonable demands, to subtly exert power while grinning like a buddy. there’s a similar disconnect between caroline and ruby; this kind of impasse where, despite their friendship, caroline’s life of unexamined privilege prevents her from understanding ruby’s reality—for example, that unpaid internships are an unimaginable luxury for people living hand-to-mouth.

the selling point of this book* is the relationship between martin and ruby—a man and his adult daughter who love each other but have wildly different personalities and spend the whole day struggling to communicate, wanting to feel valued by the other but mostly feeling hurt and misunderstood. their love is clumsy and messy and heartbreakingly real.

martin’s discomfort with ruby began when she started hanging out with caroline, and when she went off to school …he had most feared that she would start to behave like the tenants in the building. he’s gruff with her now because he’s scared for her—about what might happen to her if she doesn’t start taking her life and her career seriously.

At least Ruby was showing more signs of shame than she had last week. “I’m not your human daughter anymore,” she had said to Martin and Debra as she moved back in, dragging old grocery bags full of clothes through the door. “It turns out you birthed a living, breathing think piece. The failure to launch millennial blah-dee-blah.” She had looked expectantly at her parents, but neither one of them had laughed. Her words had sounded rehearsed to Martin. Bravado paired with self-deprecation—was this all her education had taught her?

he’s frustrated by ruby’s casual attitude to figuring out her next steps—resurfacing his fears that she’s become too influenced by caroline and her wealthy friends, who—unlike ruby—can afford to take a leisurely approach to life.

ruby’s got her own goals, though, and she’s more clear-eyed about the upstairs people than her father realizes, but she doesn’t actually grasp how tenuous martin’s position is, how superficial the tenants’ magnanimity, how intricate the social game that keeps everyone happy, and how easily it can all topple down.

anyway, tonight caroline’s having one of her epic parties, the ones that tend to, despite martin’s admonitions, spill out onto the rooftop. should be fun!

i enjoyed this one—it has great character work and it’s a coolheaded look at the class divide in nyfc; in the very neighborhood where i work my itty-bitty retail job selling books to people who…can afford a lot of books. and while the customers are the most pleasant i’ve encountered—effortlessly polite and patient to an extent that it makes me a little nervous, when this whole pandemic started and we had to shut down because of the government mandate (a full week after pretty much every other store in the neighborhood had closed voluntarily), there was a bit more entitled outrage than i’d expected, customers declaring “well, i think books ARE essential!” and “what am i supposed to READ while i’m self-isolating??” kind of forgetting to make that one empathetic leap and realize that the sad little bookseller you’re talking to should also be self-isolating instead of braving the subway to get to work, when—again—most of the city is already shut down. and while i admit it’s an appealing vision of quarantine: cooped up all day reading, making daily trips literally right downstairs to the book shop to buy another before retreating back up to your safety-cave, i do not get paid nearly enough to be your angel in the ‘ronastorm. nor to live directly upstairs from a bookstore.

speaking of the subway, because this mess of a review is already over and forgotten as far as i’m concerned—i was reading this book on the subway platform (way back in the good old days), and as i was getting onto the train, a woman asked me if i was enjoying it, to which i replied “so far, yes!” and it turns out she had gone to school with the author and we had a lovely chat, and just like the characters in this book, lives intertwined.

that story sounds like a dream i had, what with all the “talking to a stranger” and “being closer than six feet to a person,” and this “subway” business. actually, the subway is more than a dream right now. it is a nightmare.

this is what those richy richers wanted me to risk my health on, cross-boroughing so they could buy a copy of Bel Canto or whatever. 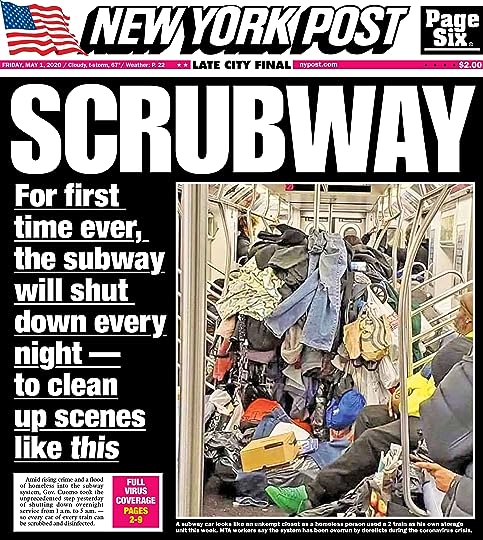 * besides lily/the ghost of lily—which, if you aren’t picturing this lillian, you’re definitely doing it wrong