The Mothers of Voorhisville by Mary Rickert
My rating: 3/5 cats

happy mother’s day to all the creepy mothers and creepier children!

Being a mother, I figure, is like going a little bit crazy all the time.

i read this one in a panic after i decided to up my reading challenge to 290 on december 30, even though i had only finished 288 books at that point. i thought “well, i am only 100 pages from finishing that one book, and i will read a tor short to make it 290—simple dimple.”

but this one fooled me by being one of those rare tor shorts that goes on for eight screens instead of just the neat and tidy single screen. and it’s not even like it’s long by typical book-standards, but it was unexpected and i was a little concerned that it was going to be my undoing, even though i was grateful for the illustrations that took up some of the room. 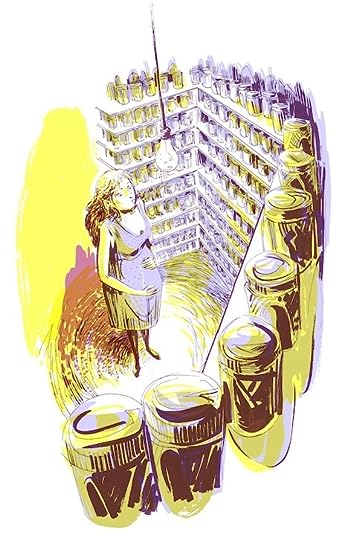 and—yes—i could have just chosen another tor short to read, but that would be cheating and i am very obedient to my own code of reading behavior.

but—this is another tor short that i didn’t love. i liked it, but i didn’t like-it like it.

the premise is good—a mysterious stranger driving a hearse, smelling like lemons, rolls into and out of town and nine months later, many of the town’s women—married and unmarried, old and young—give birth to babies. and all these babies share an unusual physical characteristic.

and you might think, “i have SEEN this before:” 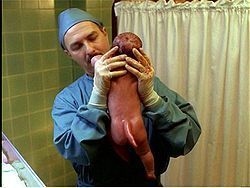 but while it does share some of the building blocks of that one, in this situation, the babies have wings, not tails. they are more like sharp pointy bat wings than feathered bird wings, and it makes for an incredibly painful birthing process. 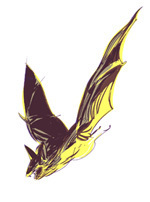 the new mothers bond together over their babies, although initially they try to keep both the wings and the baby’s dubious paternity out of the conversation.

“It’s quite clever of you to start without the man hanging around. Everything you need from him, you’ve already got.”

the man is expendable, forgettable, and all that matters now are the babies, and the mothers become protective to the point of possessive.

The mothers like to believe they were driven to the horrible things they did by mother-love. I can tell you, though; they have always been capable of cruelty.

eventually, the truth about the wings comes out, and from there the story takes a sharply dark nosedive where it has the potential to be a stunner, but it never quite came together for me.

part of the problem i had was that it was told in a number of different voices, intended as a written testimony of the events surrounding the births. but instead of this technique providing a welcome multiplicity of perspectives serving to broaden the reader’s understanding of the situation, it just hobbles on in a fragmented, repetitious way. there are portions written collectively as “the mothers,” in greek-chorus fashion, and portions voices by individual mothers, swapping off the chronicling when one becomes overburdened or digressive:

As far as I can figure out, that is the beginning. But is it? Is it the beginning? There are so many of us, and maybe there are just as many beginnings. What does “beginning” mean, anyway? What does anything mean? What is meaning? What is? Is Timmy? Or is he not? Once, I held him in my arms and he smiled and I thought I loved him. But maybe I didn’t. Maybe everything was already me throwing babies out the window; maybe everything was already tiny homemade caskets with flies buzzing around them; maybe everything has always been this place, this time, this sorrowful house and the weeping of the mothers.

i mean, that’s all blah blah blah before it gets to the interesting shit at the end, but then frustratingly switches voice again immediately after.

i found it rather shallowly written. during one of the big action sequences, characters are running around confusedly, saying and doing things that don’t really fit the situation, and it would have been farcical if it hadn’t turned so horrifying.

i liked it very much when it started shifting into a waco-type situation, but even that twist never came to much—the situation kind of came to a halt—stagnating in lockdown without progressing the story or deepening its themes. so many intriguing elements: madness, incest accusations, murder, secret burials, manic baking, jelly murals, and lines like “You better be careful. If Emily finds out you’re eating the house, she’s going to kill you,” but a lot of it was just flash with no depth. there was too much left unresolved and unexplained—what about that thing that happens when the wings are touched? how did this all go so bad so fast? is the september 11th thing just to place this in time?

it just doesn’t have a very cohesive narrative, which considering how much longer this shorty is, is kind of a shame. obviously, the sacrifice and fierceness of motherhood is a central theme:

What mother wouldn’t kill to save her babies?…We mothers take the blame because we understand, someone has to suffer. So we do. Gladly.

but it’s far from the ONLY theme, and i feel like had it been confined to the shorter tor short length, it could have been tighter and more effective overall, instead of spiking out into half-explored offshoots. but what do i know—this one has really high ratings here, so it might just be me having this cold response. i have been wrong at least twice before, after all. 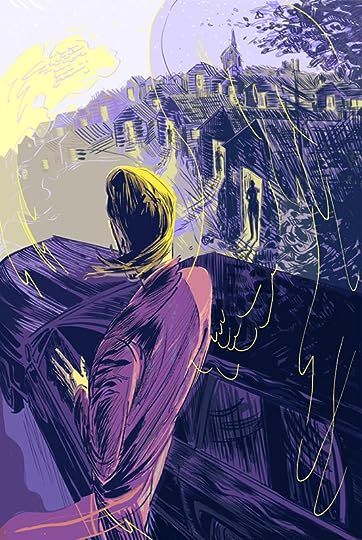