The Ink Readers of Doi Saket by Thomas Olde Heuvelt
My rating: 3/5 cats

In his frenzy, Uan had forgotten all about the general consensus around the ancient fertility symbol. The adulterous rice peeler Somchai had once cheated on her husband with three neighbors and a shopkeeper from a nearby village after she had been spotted on the phallic altar, touching herself and wrapped in nothing but silk ribbons. As a penalty, Somchai was buried waist deep in the rice field so that her excess fertility could seep into the crops, and it was decided that the bewitched phallus was never to be touched again, and was only to be greeted by passersby with a brief nod of the head, something that was ardently copied by the villagers and which consequently led to an abundance of oral sex. (There were rumors that the stone was not in fact bewitched at all, but that lustful Somchai suffered from some type of obsessive exhibitionism. Nonsense, of course.)

this story was okay, which is pretty much how i felt about this author’s other free tor short (You Know How the Story Goes), and his novel (Hex), which got an extra star cat from me for the sheer whackadooishness of its ending.

this one is set, inexplicably, in thailand, and is a strange tonal mishmash of melancholy, humor, and eroticism. at its core, there lurks a really great story about wishes, manufactured miracles and coincidence, but the tongue-in-cheek humor of it watered down its emotional impact and made it read more silly than affecting.

it’s also frontloaded with NINE footnotes translating/explaining the meaning of various characters’ names, a distraction which is abandoned a few paragraphs in, making the reader’s entry into the story a very ragged journey instead of a hook to the mouth.

i’m not sure whether to award or deduct points to the story for forever searing into my brain the image of a dragonfly ejaculating, but either way, it’s now a part of me. 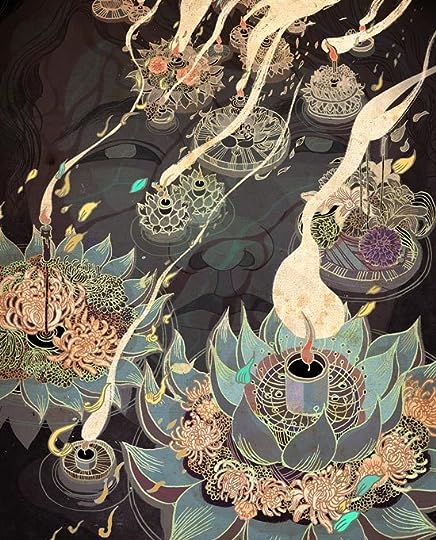