The Girl with All the Gifts by M.R. Carey
My rating: 4/5 cats

i think it’s safe to discuss the fact that this book is about zombies. that cat is outta that bag. but it’s one of those new spins on the zombie-tale, like Raising Stony Mayhall and Zone One and The Reapers are the Angels, where the focus is not “run away from zombies aaaaaahhhh,” but one which comes at the zombie story from a social philosophy angle as the survivors struggle with the responsibility of remaining human and redefining humanity in a world in which they are outnumbered by monsters, here known as “hungries.”

which makes it sound SO zzzzzzzzz.

so let me back up because there is PLENTY of action in this puppy. we got guns and zombie kids and mad scientists and marauding gangs and attacks and close calls and a wallop of a reversal in the ending that kicks the predecessors of zombie lit’s ass.

and now for some secrets, for those of you who have read the book:

View Spoiler »BECAUSE OH MY GOD, HOW AWESOME WAS THAT?? the timing on this book was perfect for me, as i was on a toxoplasma gondii tear after reading this book and this book, and ophiocordyceps unilateralis has pretty much the same horrifying MO. nature is so fucked-up, man! this was a very cool twist on the zombie novel, and while i personally loved mira grant’s newsflesh series and found it completely medically plausible, this one can totally stand beside that series with its head held high. awesome, terrifying shit. 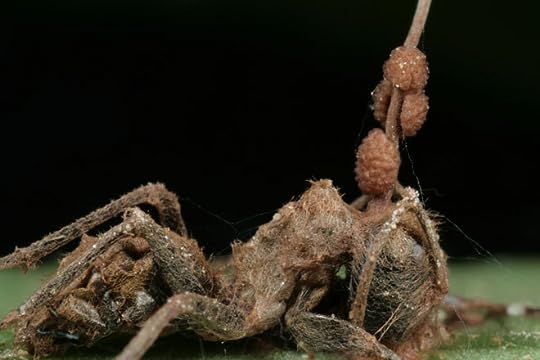 okay, we’re finished in there.

so, yeah – this book is pretty great. it has all the action of a horror novel, but it’s definitely a character-driven novel, and it’s surprisingly poignant. melanie is such a great character. you really feel for her in her struggles to resist the impulses generated by her hunger:

Melanie is moving forward and pulling backward at the same time. A man with a big dog on a leash and she’s both of them, straining against the tether of her own will.

and for her equally powerful hunger for love, acceptance, and understanding. but it’s not all hippie shit – she still has these wonderful feral attributes, which combination of qualities i am a sucker for:

when i was barreling towards the ending of this, i was crossing my mental fingers for a sequel, but when that ending hit, i completely changed my mind, because i think it finished with a perfect emphatic period that would only be diminished by a return to the story.

all told, a great addition to zombie lit, and i am so glad i squeezed it into my giant wobbling “must read this very minute” stack.