“What do people look for out of a story, Spin? You told enough of them to know.”

I thought a moment, then answered. “They look for it to have a good shape and end where it’s supposed to.”

this is a good/better/best kind of trilogy: The Book of Koli set everything up, The Trials of Koli widened the margins, and this massive conclusion explodes everything, resetting the pieces beautifully.

When something big starts to fall, it goes as gentle as thistledown at first. But oh, how it gathers!

although the books are named for plucky protag koli, he was never my favorite character, so when the second book split the POVs between koli and spinner, it was a very welcome development. this third book has three POVs, and when that third voice unexpectedly took over, i literally gasped with excitement, and my little readerheart pitter pattered. it was exactly the angle the story needed, and it provided some excellent insights and clarity and depth, brilliantly upending some notions we as readers had been taking for granted.

over the course of the three books, the characters have changed and grown with their experiences, although koli remains pretty gormless, and his voice is by far the least appealing of the three. his boundless empathy, loyalty, and wide-eyed approach to the world around him should make him ill-suited to survive that world, but the characters accompanying him on his journey: ursala, cup, and monono, provide enough cynical grit to keep me invested, and to keep koli from chasing a butterfly into an abyss or something.

while koli & pals are off exploring the ruins of ingland and coming up against some truly diabolical foes, spinner’s story relates the challenges facing those left behind in mythen rood. she’s become a formidable strategist; militarily, defending the village against outside forces, and politically, using her position to propose changes sure to rock the social hierarchy koli already set a-tremble by exposing the lies everything’s been built upon.

she has achieved so much by this point, and matured with her hard-won knowledge, taking on a great deal of responsibility at the expense of her peace of mind.

Smiling in the face of horrors is a thing you can get better at. It was probably one of the first tricks our mothers’ mothers ever learned.

she’s smiled through plenty of horrors and suffered enough losses to understand the finer points of loss and mourning.

Grief’s not a debt we owe. It wells up or it doesn’t.

everything here is bigger—more action, more moral quandaries, more philosophizing about the double-edged sword of technology and progress, and the myriad ways that power—whether scientific or societal—can be abused.

there’s also plenty to chew on if you dig mind/body matters in a transcending corporeality kind of way: numerous AIs exploring themes of agency v programming, clones, implanted memories and their effect on personality, and a sensitive and nuanced treatment of gender identity in characters who are “crossed,” like cup.

the story’s big and complex enough that it (mostly) doesn’t have to rely on polarizing characters into categories of ‘good’ and ‘bad,’ nor presenting ‘right’ and ‘wrong’ solutions to problems. the wide range of experiences allows for an equally broad field for the exercise of individual choice in weighing opportunities.

there’s a parallel in characters like chevili and nanashol declining to take part in koli’s plan to unite all of ingland’s survivors because they’re happy as they are and veso’s decision to forego gender reassignment surgery,

He said it was not so much a thing of flesh and blood for him, what he was, but a thing that was mostly inside. Body is a shadow, he said. When I fall in love, I won’t care about my lover’s shadow, nor I wouldn’t expect them to look overlong at mine.

it’s a very thoughtful and rewarding end to the series, and the strongest piece of the whole.

however, i have a mini-complaint: for all the premise-promise of the killer trees and their prominence on the (goddamn gorgeous) covers, they don’t have much of a presence in the book. there are far bigger threats in this world, and their snatch-and-grabby ways are more of a theoretical-occasional than a constant peril.

but all was forgiven when monono name-dropped my beloved l.c.:

“They’ve got that look about them. A bunch of Josephs in search of a manger, as Leonard Cohen would say.”

“I don’t know what that means.” 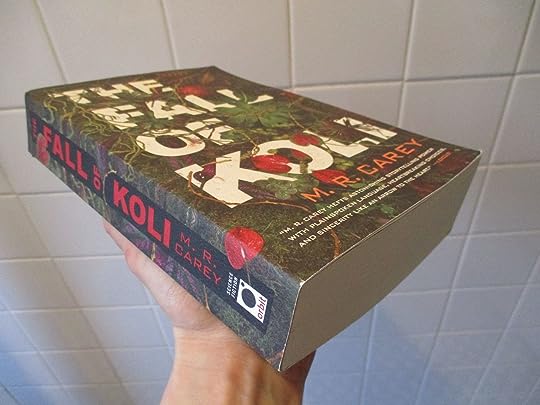