The Down Days by Ilze Hugo
My rating: 4/5 cats

There was a sign against the fence that read: COVER YOUR HANDS. COVER YOUR MOUTH. DON’T LAUGH. And below that: PUBLIC LAUGHTER IS A CRIME. OFFENDING MINORS WILL BE DETAINED; THEIR PARENTS FINED. The empty swings swayed in the wind in a ghostly kind of way that gave her the creeps and made her think of Then again. How weird to think there was a time when parks like these rang out with the sound of giggling children.

oh, man—imagine if there was ever a disease that shut down all the places people went to unleash their kids, making the sound of children playing a Thing of the Past?

somehow, without even setting out to do so, i read three pandemic-y books during quarantine: Survivor Song, Malorie, and this. i was going to read my ARC of The End of October, but then i said MAYBE ANOTHER DAY FOR YOU, SIR!

pandemic lit is nothing new—it’s been a wildly popular subgenre for aaaages, and one i’ve personally been into, but it was such a weird experience to be reading ARCs of outbreak-themed books during the early days of an actual global outbreak, knowing that by the time they published, the scenarios wouldn’t be entertaining “what-if” escapist funtimes for many readers, and that many of the details would seem all-too-familiar.

Malorie is a bit like Station Eleven; taking a look at *dramatic gesture* humanity in the long-term aftermath of a species-decimating event, and we aren’t there (yet) in either severity or retrospectivity. Survivor Song takes place during the first 24 hours of an outbreak, and a lot of those details bore out—maybe not in so short a timeframe, but it still felt eerily documentarian in nature, at least for me here in merry olde queens.

this one, in some ways, feels the most prescient, the most relevant of the three i read. it is set in a quarantined african city seven years into an outbreak of a highly communicable disease called the Laughter because it begins with hysterical, uncontrollable laughter and ends with patients’ bones disintegrating, their organs turning into soup.

on the one hand, it’s the most fantasy of the three, because of its many supernatural elements, the black market for stolen human ponytails, the bars where you can pay to fight people dressed up in costumes, and the general energy of its broad neo-dickensian details—an orphan investigator, a pet hyena, underground (literally) data dealers, secret libraries, mysterious nuns, foodist cults, etc.

but in its smaller, more specific behavioral details, it really gets how people react, psychologically, in unstable times with uncertain futures, and some of the details, all written pre-covid, have become Part of Our World.

in sick city, people wear masks and gloves wherever they go, A few suckers even started drinking diluted bleach, thinking it would cure them from the inside out, people have become paranoid and violent, suffering from restrictions, from being cut off from the world, and conspiracies about the disease’s origin run rampant:

”New word on the street is that it’s the Yanks. That they shipped the Laughter in through vaccine drives. Said it was vaccines for polio and measles they were giving us—for free, from the goodness of their big red-white-and-blue hearts—but that was just a cover-up. ‘Cause it’s way cheaper and quicker to stick their needles into us way down here in Africa than into rats or monkeys in their fancy labs—which could take years of testing and jumping through legal hoops. If the vaccines worked, these big pharma snakes could go into production much faster and make fat wads of cash by selling them to the US military. The plan, they say, was to use them on soldiers who would go into war zones and spread the Laughter. All the while being vaccinated against it themselves. Pretty clever, right? Wouldn’t be surprised if our own government was in on it, too—giving those in power the opportunity to cordon off Sick City and invoke martial law.”

as well as conspiracies about the disease’s very existence:

“The Laughter, of course. The whole thing is just a big old population control experiment by Western imperialists who are lining the pockets of our government to turn a blind eye.”

“That’s crazy. Don’t you see what’s happening all around you? What about the deaths? The bodies? How do you explain those away?”

while i don’t understand holocaust deniers, who have their own bias-bullshit going on, i do understand the impulse to treat the sources of *some* accounts of verylongago historical events with healthy and curious skepticism, but i don’t get how people can deny a global pandemic when it is happening all around them. i’m sure there’s all sorts of shit regular folks aren’t being told, and numbers being fudged up or down for reasons, but americans politicizing a health crisis by refusing to wear masks or take other precautions, endangering people because this is just some “libtard hoax” or whatever? i do not understand your logic. it’s a thing. it killed john prine. fuck you.

”…all this paranoia and fear-mongering only make our job, and the job of every single poor damn health worker in this city—who are putting their lives on the line to help everyone, I might add—harder!”

there are other perfectly-expressed subtleties woven into this novel, about how constant mask wearing—VERY NECESSARY MASK-WEARING—is alienating and depersonalizing, and how wearying it is to live under the constant threat of catching or spreading a disease.

The way Faith figured, the masks people wore these days weren’t just physical. And there were many of them. Somedays it felt to her like there wasn’t a single true soul left. Like every single person in this town was just a series of masks over masks over masks with nothing real left underneath. Not that there was anything anybody could do about it anymore. She couldn’t help wonder how much of who people were and who they became was really up to them? It was like the Laughter had flipped a switch. Even if you didn’t catch it, it changed you. Remade everyone. Faith couldn’t even remember who she was before all this…

here in former-epicenter NYFC, i tested negative (knock wood), but i was not unaffected. i got ’rona wuz here 2020 carved deep into my psyche. the human death toll is too enormous for me to even wrap my head around, but the smaller notes—all the local business that won’t be reopening, the number of taxis in my neighborhood with “for sale” signs on them, all the pets who starved to death in apartments while their people were hospitalized, not knowing when i will see my own people again, scattered as they are—these are comparatively small tragedies, but they’re like little experiential contrails affecting my everyday, and whenever i think any bigger-picture than that, i either freeze or hyperventilate. so, yeah, consider me remade.

me, i’ve already amassed about thirty or so reusable masks, and it’s made me even more fashionable. 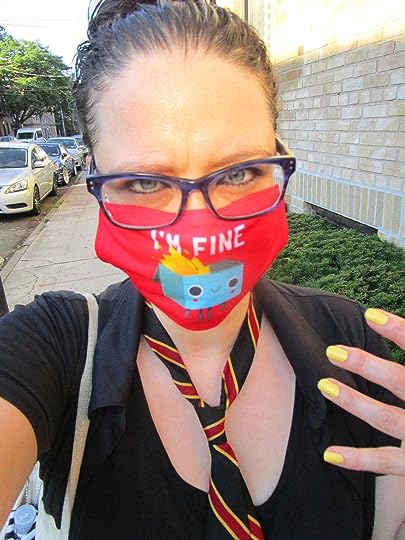 anyway, i enjoyed the book. it’s a debut, and it was a little messy at times—lots of different characters, lots of different plot-threads that maybe needed a bit more rigorous corralling early on, but once it found its bearings and the various stories started converging, it was a very fun read. sometimes sad-fun, but that’s the best we can expect these days, yeah?

ABOUT A PANDEMIC/QUARANTINE NO NO NO!!!