The Children’s Home by Charles Lambert
My rating: 2/5 cats

“It seems I’m doomed always to miss the point.”

and it seems i have missed the point of this book.

i don’t know the circumstances around the writing of this book, but it feels less like the author had a clear idea of his story’s direction in mind and wrote purposefully towards that conclusion and more like he wrote a bunch of admittedly arresting and creepy images and then thought – shit – ending, ending, ending…

part of the problem is its length. in e-ARC form, it’s 162 pages. as a novella or a tor short, i think this could have been excellent; the idea has promise, but it’s too long and detailed to be a fairy tale and too short to work as a gothic horror novel. it feels a little like one of those cheese porcupines 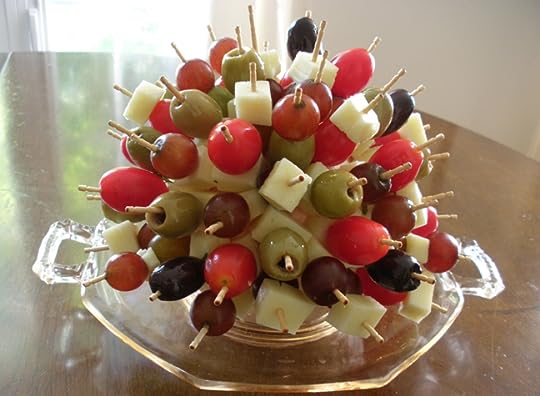 where it looks impressive, but none of the tastes really work together, and it’s kind of sensory overload with too many sticky-outy details.

i’m generally a fan of these kind of slipstream borderline fairytale stories, but there has to be something to them to be effective. there’s some truly compelling and violent imagery here, but there’s no cohesive story, nothing that binds the tale into a satisfying whole, allegorical or otherwise.

morgan is a man who has been horribly disfigured in an accident. View Spoiler »let’s call it an accident. « Hide Spoiler he lives a withdrawn and reclusive life on his massive estate alone except for a housekeeper named engel, who appeared mysteriously on his doorstep one day, seeming to already know his particular tastes and needs. he inherited the estate and plenty of money to keep him in a state of suspended animation as he lives in ignorance of the world outside his gates, spending his days in a hidden and windowless book-lined room where he catalogs the estate’s library, never leaving the grounds.

we learn some details about morgan’s childhood and about the turmoil and violence outside the estate’s walls: the guards, the destruction, the poverty; things he witnessed when he still left the grounds, and things he was told were occurring. it’s all very vague: There were tales of what the army did to people, tales that were told in the kitchen and beneath the stairs.

these tales, and the shame of his once-beautiful and now destroyed face, are enough to keep morgan shuttered away from the perceived dangers of the world, entrusting the management of the house to engel.

So much went on in the house of which he was unaware. The running of the place, he often thought, was blessedly arranged behind his back

he mostly just drifts in an extremely narrow range of experiences, existing without truly living.

until the day the children begin to appear. the first to arrive is moira, a baby of a few weeks old. they continue to arrive, unaccompanied, unexpected, sometimes emerging out of the air itself, and range in age up to the oldest – david – a boy of five.

in typically passive morgan fashion, he is unsurprised and unruffled by their appearance, and accepts their existence in his home:

He knew there was a mystery about these children, and not only in the nature of their arrival, but he pushed the thought aside.

he feels a bewildered love for these children, and assumes charge of them; adapting to their presence as he has adapted to engel’s presence; as he adapts to all things. his role is less responsible adult and more observer, always on the periphery of their games and laughter, noting It has never been a house that welcomed love.

morgan notices their oddities, but only questions it in the most casually offhand way. david in particular behaves much older than his years and assumes authority over the entire household. the children seem to share an unspoken purpose, which is obscure to morgan.

when moira falls ill, doctor crane is called in to consult, and after a period of shy hiding and observing, morgan eventually emerges and the men establish a friendship, after which doctor crane moves in as well.

morgan reveals to crane the origin both of his severe facial scarring and his wealth, as he understands it. he knows his family owns and operates a factory, but he isn’t clear on what they produce. his sister rebecca, whom he hasn’t seen in many years, is running the family business while he remains voluntarily sequestered, the monster behind the walls.

as the children continue to arrive and behave in enigmatic ways, they spend their time scouring the estate’s books for … something.

“But it must be. It must be here somewhere,” the boy said, throwing the book down and picking up another. “Or what’s the point?”

“But what?” said the Doctor. “What are you looking for that’s so important?”

“What we were looking for,” insisted Melissa when David didn’t answer. “That’s what’s important.”

this evasiveness pervades the book and is very frustrating. the mystery of the children’s appearance and their purpose is drawn out foreeeever, and it reads like nothing more than the author toying with the reader. there’s a lot of repetition of “who are these children?” and “what do they want?” and the answering repetition of “not yet” and “The time will come. You’ll see.

it’s cryptic for the sake of cryptic.

“Where are you from?” said Morgan.

“I’m from where we were taken,” said David. “We all are.” And then he turned away, and would say no more.

and eventually it erupts into hostility, which the reader can’t help but take a little personally

“Ready for what?” said Morgan.

David was normally so patient. But this time he said, “How many times must you ask and not be told before you stop? Why can’t you just wait?”

we’re waiting, we are, but get on with it already.

“David knows best,” said Melissa. “You have to trust him, like the rest of us do.”

and i’m trusting, but sometimes it’s nice to have a sense of where the story is going instead of just being told to wait and see. as though we have a choice.

a further complication is the blurry nature of the children themselves. we never get a sense of how many there actually are, but it seems to be somewhere in the dozen-to-twenty range. they are amorphous to the point where the seed is planted that they might not exist at all

“Have you ever noticed,” he said, “that the children seem to know when they’re not wanted, not in the ministerial sense, of course, but, you know, when somebody simply wants to be quiet, I suppose I mean when I want to be quiet? They just disappear, they make themselves scarce, as though they’ve never been in the house at all, as though they’ve never existed. And then, just when you notice and start to wonder where they are, when you start to worry about them, I suppose, although you might not realize it’s worry, it registers as a sort of apprehension, they reappear as miraculously as they disappeared. They pop up from behind a sofa or you hear them crying or calling things out in the garden. But haven’t you ever wondered just where they go?…It’s as though they came from the air.”

and when asked by crane if he has ever mentioned this phenomenon to engel,

“Because that’s the other thing. I know it sounds absurd, I hardly like to admit it, but sometimes I have the strong impression that Engel disappears along with them. Sometimes I feel that I’m utterly alone, not just in the house but altogether, in the world in a way, as though none of them had ever been.”

which is another layer of unreliability and confusion muddying up a story too short and slight to contain all its questions.

ultimately, we get answers. sort of. the problem is that this story exists in a temporal and geographical void, where locations are referred to in only the broadest terms. i assume it is england because of the histories of fox hunting and the presence of the illustrated london magazine on the estate, but otherwise, we are just told vaguely about “the city” or “the factory.” by not giving us context in terms of location or time period, the eventual reveal means nothing, and we aren’t sure if the events are taking place in the real world, or are meant to be allegorical stand-ins for historically similar occurrences.

it’s a collection of striking scenes and imagery: there are suspicious and kafkaesque men from the ministry of welfare, a magical transformative mask, a mysterious chest containing a wax statue of a pregnant women whose stomach is hinged to reveal the baby inside and which seems to hypnotize the worshipful children, a wax head in the same design, as well as the horrific details of morgan’s accident, his mother’s cruelty and her decline, and of course – the big moments towards the end. they are all memorable scenes, but they seem to have little to do with each other – they are separate cogs that don’t turn the machine.

the style is also intriguing – it’s one of those books where each chapter opens with a summary of the contents to be found within:

in which Morgan and Doctor Crane play backgammon

which is more a convention of children’s stories, i think, although i have been encountering it a lot lately, so maybe it’s coming back into vogue.

i do love the sinister tone of this book, and i’m a fan of uncanny stories with spooky, knowing children in hauntedish houses with unreliable narrators and the feeling of readerly discovery, and there’s definitely good writing, particularly in morgan’s musings on identity and appearance

He wanted to see if anyone had lived with the living face removed and only the mask remaining, pressed and sealed to the bone. But the writer had no interest in the notion that faces and masks might be interchangeable, or that the lines between them might be blurred. Morgan had not occurred to him.

Just imagine if you saw my face. Then you would know what fear was and you would think it was pity.

it’s jsut too short to develop as many themes as he seems to be striving for here – loneliness, child abuse, terrible families, inherited guilt and secrets, the victims and violence of war, vanity and the shame of disfigurement, the possibility of love. and morgan is such a dissociative character, there’s always the question of

he is passive and incurious to a degree that is so pronounced that he is essentially a flat stock character instead of a participant. which is fine in an allegory or a fairy tale, but i think this is meant to be something more than that.

i dunno – all i can do is repeat morgan’s line from the opening of this review:

“It seems I’m doomed always to miss the point.”

i guess we should just go ahead and call 2015 “the year karen stopped liking books.”