The Chain by Adrian McKinty
My rating: 3/5 cats

i wish i’d read this when it first came out and everyone was raaaaving about it, so—still fresh in everyone’s raving minds—i could ask them what i missed.

it’s fine—i wasn’t bored by/angry at the book while i was reading it, but it didn’t light that inner readerfuse or make me want to take to the streets to urge other people to read it immediately.

it’s an original premise for a psychological thriller, which is no easy feat these days, but its originality might be the flipside of its being so wildly implausible.

it involves an intricate criminal enterprise known as the chain, in which someone is kidnapped and a ransom demand is made to their loved ones, who are then instructed to kidnap a whole other person and demand a ransom/abduction from that person’s loved ones or their own loved one will be killed by the person whose loved one is still being held by the last person who’d been dragged into this situation. (i’m gonna stop saying ‘loved one’ and just say “kid,’ because although the instructions do not specifically require the kidnapped individual be a child; pro tip: kids are easier to overpower in an abduction scenario and all the kidnappees in the book are kids, so.) once the next person fulfills their obligations, the newly-criminalized person gets their kid back and doesn’t have to kill some rando’s child, and the cycle of kidnapping/ransom/kidnapping wash-rinse-repeats off into the sunset.

however, the reason it’s called a chain and not a recursive sequence is a) because it sounds cooler, b) it makes an innocent person commit a crime that the mastermind can use against them at any time, thereby chaining them to silence, and c) the chain isn’t broken once you complete your unsavory task. even after your kid is returned and all tucked back into their cozy little bed, you’re still basically on call. if the next link messes up—alerts the authorities, chooses a victim whose family contacts the authorities, fails to fulfill the orders in any way, you might be recalled to get the chain back on course, whatever that might entail, or the powers that be will tap the previous link in this chain and they will be forced to come for your kid again, and on and on we go.

it’s a complex and intricate piece of blackmail and manipulation that i’m probably not explicating very well at all, but all you need to know is that it’s been going on for years in a human centipede of victimhood and culpability and no one’s broken the chain yet, although some have died trying.

the engineer of the chain (and also the author in his afterword) says the idea came from the practice of “exchange kidnappings” in mexico, where a family member of a kidnapped person volunteers themselves as a substitute, swapping out a kid for a sturdier adult, which is pretty considerate behavior from someone who snatched your kid, and is certainly a more straightforward procedure than the chaaaaaiiiin.

obviously, this is not a viable enterprise and the fact that it has worked for so long—that the reader is expected to accept that it has worked for so long—is cuckoo-bananas. even if one accepts that the overseer of the whole shebang is a criminal savant who has developed rules and guidelines and failsafes to ensure that the show will go on, the whole thing is pretty rickety—the folks enlisted into this scheme are suburban parents who wouldn’t have the kind of criminally strategic background to pull this off. not only having to potentially kill someone’s kid, which is brutal enough, but also abducting a child and getting away with it, keeping the kid somewhere without anyone finding out, and just the psychological fortitude to carry on living like everything’s normal, making excuses to schools and friends and the kid’s friends about where their kidnapped child is for all this time without someone getting suspicious. you need the will to do a thing but also the SKILLS to do a thing. i’m sure those roped into this madness would have the motivation—it’s one of them biological imperatives for parents to want to keep their kids alive, but as far as the means, well, it’s a crapshoot. you kidnap a kid and tell their folks they have 24 hours to become fluent in russian or else the kid dies, and i’m sure they’d all try really hard, but the average person wouldn’t be able to achieve that goal in that timeframe. except the russians. they’d ace it.

and those who did succeed would have to then choose a successor, somehow identifying a random stranger they think would be able to master a whole new language in that timeframe and it’s too bonkers to even wrap your head around—the factors, the loopholes, the variables, the unpredictability of human behavior—too much can go wrong and it’s inevitable that it will become less of a chain and more of a tangle of duct tape and stopgap solutions. just…don’t try this at home, is my advice. 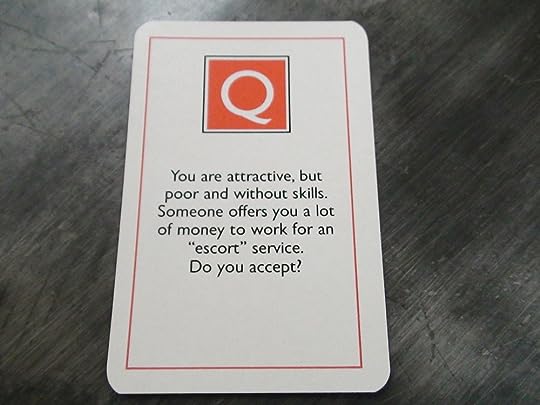 it’s a moral thought exercise whose impact depends on what the reader brings to the reading. that’s true of all books, obviously—all interpretations are subjective, all reactions depend on an unquantifiable cocktail of personal experiences and values, but it’s even more the case with this one, where it’s such an implausible situation that being able to suspend your disbelief enough to enjoy it depends on your ability to put themselves in the characters’ position and give the scenario a good “what would i do?” think.

i don’t have kids, or even know any kids, but i tried to relate, swapping out “kid” for “pet,” which substitution apparently occurred to other childless readers, and aPriL does feral sometimes’ review breaks this angle down and also does a much better job than i did of explaining…everything.

anyway, it’s a fast read although it’s pretty easy to guess the whodunnit part even if you read the final copy and not the arc like me where, presumably, there isn’t an oopsie of a namedrop a few pages before the Big Reveal, View Spoiler »calling margaret “ginger” a page and a half before her identity is explicitly exposed « Hide Spoiler. although, in truth, most mystery readers will have figured it out by then.

* i got very excited when i went to the scruples site and saw this statement: Download a PDF and make your own Scruples cards.

i was thinking, now there’s an idea: custom-made scruples cards designed to target specific individuals at your game night to delight in the same kind of secret-revealing humiliation and cruelty that every game of ‘never have i ever’ becomes. alas, it’s not a make-your-own card situation, it’s a “print out what already exists” situation. thanks, scruples.