The Book of M by Peng Shepherd
My rating: 5/5 cats

i’m an even bigger and more ungrateful dick than usual, neglecting this gifted book for as long as i did. A) it was phenomenal, so i was doing myself a disservice, but more importantly, B) this was a gift from my GR secret santa back in 2018(!), and when i finally picked it up, i found this stuck between its pages and it broke my heart a little: 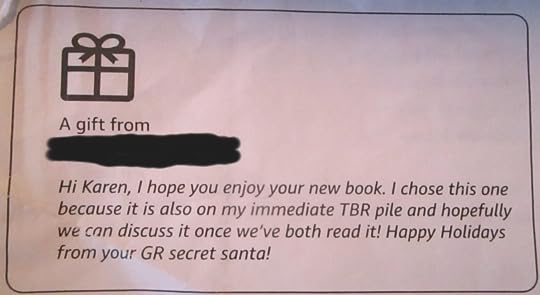 to make it EVEN WORSE, not only did i not read it for two years, but it turns out i forgot to even POST A THANK YOU MESSAGE in the secret santa group when i received it. i am a monster.

but enough about me and my failings.

you know who didn’t fail? (prepare yrself for a graceful segue): peng shepherd.

this book is ridiculously good. it’s a savor slowly/gets under your skin kind of book. and it’s a frickin’ debut! it’s a refreshingly unique spin on the done-to-death post-apoc scenario: all of a sudden, across the globe, people’s shadows begin to disappear, and shortly thereafter, they begin to lose their memories. which is all bad enough, but when people forget—say—that a market exists, the market that has disappeared from their memories also disappears in reality. someone forgetting that deer don’t have wings on their heads manifests head-wing’d deer into the world.

the book angels who guide my reading habits no doubt made me “forget” to read this until it just so happened that i was commissioned to write a piece about memory for an upcoming print issue of f(r)iction, and had been researching how memory actually works vs how hollywood thinks it works, so this made for a perfect dovetail of work and leisure reading. but even though i am now an expert on brain science, there’s a lot to this situation i don’t understand—neither the peer-reviewed medical articles nor the film industry trade journals ever mentioned the connection between shadows and memory, let alone the range or specificity of the shadowless’ influence on the world. but focusing on how it all works isn’t a good use of anyone’s time. the storypleasure isn’t in the situation’s plausibility. if you just sink in and let the possibility of it carry you through the unfurling slowpocalypse, you’re in for some exceptionally good, emotionally charged speculative fiction.

this book would get along well with The Stand, but it would be best friends with Station Eleven—both center around how what’s left of humanity copes in the aftermath of a devastating global phenomenon: what values persist, what aspects of civilization hold people together, what happens to forgotten culture, science, people, and both are beautiful explorations of connection, loss, grief, and the tenacity of the human sprit.

the scope is macro and (comparatively) micro—the phenomenon’s effect on the whole dang world, and on one specific couple—max and ory—who are separated when max loses her shadow and takes off without telling ory, intending to spare him the pain of watching her forget him, and to avoid causing irrevocable harm by forgetting something important. naturally, ory rejects this noble sacrifice and tries to find her.

they are but two of the characters whose journeys take them through an increasingly unrecognizable world, but they are absolutely the heart of the novel, and their story is beautiful and heartbreaking and unexpected: who they meet along the way, what else they lose or try to hold onto, where their experiences overlap or their paths nearly cross, how the landscape around them shifts as it is changed by other people’s forgettings; all shades of serendipity and coincidence and how to endure the unendurable—how much of themselves a person can lose and still keep going. it is simultaneously hopeless and optimistic and it is perfect for the nowtimes.

i did not weep, but my stony heart felt things.

i await The Cartographers impatiently. i promise i won’t let it gather dust on my shelves.

now i’m off to apologize to a secret santa!