The Blondes by Emily Schultz
My rating: 4/5 cats

here- enjoy one of the few pictures of me as a blonde that exist, and know that if i were a character in this book, i would totally attack you… 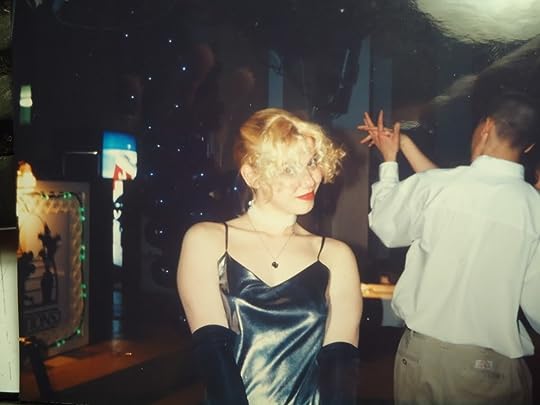 this is one of those books whose reality you just have to accept. otherwise, you are going to hate it and your brain is not going to be able to get over the “that’s not how science works!!” elements.

because to a biologist, spec. a geneticist, this book is cuckoo-bananas. a “plague” descends on the world, but it only affects blonde women and girls. there is a brief high-school-bio-class-refresher explanation about alleles and chromosomes and calico cats and why this could be a possibility. fine. but then – it also affects women who have dyed their hair blonde. women of any race with bleached or highlighted hair. oookay, now i am more skeptical. but THEN – women who shave off their naturally-blonde hair are less likely to get the plague, which causes intense rage and biting-attacks upon others. as though the decoration of hair can change the genetic markers that produce that hair. and to stave off the disease, women shave their legs and their heads and their ladybits, but what about the tiny hairs on the back of the neck? and the earlobes? shaving the head is a good start, but blonde hair is blonde hair whether it is flowing tresses or a tiny hair on the back of the elbow. eating junk food with your eyes closed doesn’t fool your diabetes.

if you are the kind of reader who can’t get past this in a book and enjoy yourselves, then you should stay away. me, i’m just along for the ride, and i have this adaptability that allows me to sorta compartmentalize the things that don’t work for me as a reader, and enjoy the rest.

and the rest is grand.

our heroine is named hazel hayes, and she is a natural redhead, which puts her in the “maybe” category for getting the “blonde fury,” or the “california rabies” or any number of names the disease adopts before it is eventually and blandly called SHV. she is a canadian on academic leave in new york who finds herself unexpectedly pregnant after an affair with her married adviser. the situation unfolds while she is in new york, and because of the attacks and the panic, communications are compromised, and she ends up getting detained at the border and stuck in a quarantine center where armed guards monitor blondes (and one lone redhead) for signs of contagion.

when she is finally free to go, she finds herself virtually alone, the plague having ravaged everything and everyone to whom she could turn. the story is told through her narration to her growing fetus, while she is holed up in a cabin in ontario with the wife of her former lover, and she finally takes the time to reflect on her life’s choices and regret her lack of perception and carelessness with the people in her life, and faces her uncertain future.

in a lot of ways, it is a lightweight story. it skims the surface of academia, gender and media studies, pop culture and advertising, but it never commits enough to being a true critical satire – these glints remain glints only.

where it is more successful is in her individual story – the complicated relationship with her mother that she only truly understands by dealing with her own single pregnancy and the shallowness of her personal connections, and all the people she has left behind.

despite how sad that all sounds, this book is also very funny. i mean, mobs of blonde airline stewardesses running through the airport, attacking TSA agents and passengers? a blonde baby attacking a tourist in the fountain at washington square park.yeah, that’s worth a giggle in all the darkness.

so, a funny and sad story about women and their dealings with each other, and image, and hindsight, and vanity, and a sprinkling of academia that for once i wish went deeper. (LGM)