The Astonishing Mistakes of Dahlia Moss by Max Wirestone
My rating: 4/5 cats

i loved The Unfortunate Decisions of Dahlia Moss so, so much. when i was working at the bookstore, i would put it on tables and displays, when i was curating lists for other jobs, i would always be sure to add it to the appropriate lists and channels, and i would suggest it to people who were looking for mysteries that weren’t too gruesome/disturbing or sf geeks looking for something (f)unexpected.

so i was really excited when i had my “derrr” moment and realized i’d be able to read this second book in the DM trilogy as part of my book riot challenge, because i’ve had the second and third books on my shelves for ages without picking them up for all of the usual reasons i don’t get around to reading books i really want to read.

this one is slightly less fun than the series opener, but it has enough of the same zany energy and silliness to remind me how great TUDoDM was, and in my experience, the second book in most trilogies tends to be the low point, so i’m ready to check the math on that with book three: The Questionable Behavior of Dahlia Moss.

but for now, book two!

now that ms. moss has gotten a taste of the girl-detective lifestyle, she’s taking online certification courses to officially get her private eye license. but although she’s still matriculating, she’s not going to turn down real-world experience if she happens to stumble upon it, even if it brings her back into the stony-frowned sights of detective maddocks:

“Are you the person that found the body? Tell me that you aren’t.”

“I did find the body. Also, I had sort of a reaction to it, and I may have, you know, thrown up a tiny amount in there.”

“I’ve been in there,” said Maddocks.

“Maybe it was more of a moderate amount.”

“There are gallons of vomit on the floor.”

in her defense, she has not yet taken the “learn not to vomit” class.

what follows is more of the same kind of fun n’ murderrrrr, as dahlia spouts sass, makes many geek-culture references, gets kidnapped a few times, learns proper nautical terminology, and follows the criminal breadcrumbs while many online nerds via twitch advise her, cheer her on, or are…less supportive.

“Hi, everyone! Guess where I am now?”

“Buried alive,” someone guessed. “Like in that old Twilight Zone episode.”

“That was the Outer Limits,” said another Twitch chatter, and then a flame war began, as it obviously would, given that we were on the Internet.

and once again, i find the world has failed me (or i have failed myself, but i’m not into taking responsibility today), for not informing me about yet ANOTHER awesome x-men character: 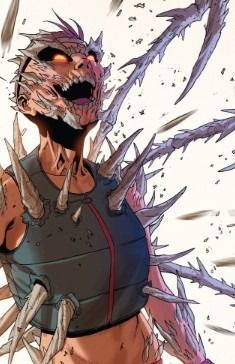 for those of you who, like me, were NEVER GIVEN THE HEADS-UP, marrow is a lady whose bones grow out of her skin, and she can YANK THEM OUT AND USE THEM AS WEAPONS TO CLUB FOOLS WHAT CROSS HER.

dear hollywood: why are you wasting our time with Rogue when there is a mutant USING HER OWN BONES AS WEAPONS????? use your special effects budget on this, please.

anyway, i still love dahlia and i love the adventure part of this one, but it was a little more relentlessly goofy than the first, and it wore me out a bit. also, although there wasn’t too much of it, the relationshippy parts got in the way. as far as that goes, the focus was mostly on the david/charice romance, but also—i really liked shuler as a character, so even though i’m not a big shipper or romance fan or anything, and i don’t care who dahlia’s kissing, i was disappointed by the underuse of shuler here, and while dahlia seems perfectly content with nathan, i still wanna hang out with shuler once in a while, ya know?

still excited to see what comes next for dahlia, and hopefully i will manage to read the third one even without a challenge-prompt.