this isn’t going to be one of my two-star cat reviews where i trash the book and scream and moan about how terrible it was. because it wasn’t that it was terrible, it was just…trite. if you have read a million books, like i have, there is nothing here that is going to surprise you (except for the fact that the people in this book put TOMATOES in the FRIDGE!! – why would you ruin a perfectly good tomato???).

it is sortof kindof a retelling of and then there were none, but not really, not at the end of the day. and i have to admit, my memory of ATTWN is somewhat hazy, but there was more tension in christie’s book, more surprises. this one just tiredly rehashes the murders and red herrings of a million books and films that came before it. it is a very typical revenge-plot book that relies too heavily on coincidence and “every trap i, the murderer, plan will work out perfectly and in the appropriate order because i am a teenage mastermind murderer and i can anticipate every possible move every single one of these chess-piece characters will make because …well, they are pretty shallowly-drawn and predictable so it’s actually not that difficult after all.”

the only true similarity between this and the agatha christie is that there are ten people in an isolated house, who get murdered one by one. it is more closely akin to those christopher pike books i burned through in jr high, where the plausibility of the plot didn’t matter as much as the race to the finish.

our heroine is some teenage girl with a serious martyr complex, who is led around by the nose by her effervescent but brittlely shallow and abusive bestie, who has an unrequited crush on a boy and shows it by throwing herself at all his friends so he will notice her. and of course, he likes-likes our martyr-girl, who likes-likes him back but “noooooo, i must sacrifice what i want because even though i am a good girl when it comes to guys and my friend is kind of skanky, her needs supersede my own because she’s got mental issues and that exempts her from basic human decency.”

and so these three people are some of the ten invited to a remote houseparty on an island without adult supervision, where they discover a crappy student film that delivers the message vengeance is mine right before the bodies start dropping.

this is the thirteen reasons why of horror novels. except, instead of lifelong guilt over how characters’ actions drove a girl to suicide, these people are gonna get murdered.

will they discover the murderer in time?

it’s a teen book for a teen audience, and i have been spoiled by too many crossover books that have a wider appeal to old fogies like myself.

but here’s a gripe – at one point, one of the characters remarks:

News flash, we’re already like halfway through our own Lord of the Flies, people. We’ve got dead bodies piling up and I don’t know about you, but I don’t exactly want to be next.

wait, how, exactly, is this like lord of the flies? how is this like an allegory of society where kids succumb to their bestial impulses once the moral codes of civilization have been removed? this is about one person’s revenge fantasy come to life. did you only read the cliffs notes??

it’s one of those books where we figure stuff out before the characters, particularly the heroine, who is too dopey to realize whose journal she is reading even when all the clues are right in front of her. even though said journal is another example of forced narrative, because the way it is written is bananas. “the girl,” “the boy,” “my friend,””that jerk from PE”… which is great if you are writing a mystery novel and you want to hide your secrets, but no teenage girl writes like that in her journal. and dopey-heroine is encouraged by male love-interest to voice her thoughts because her “comebacks” are so clever and sharp. they are not. they are just dopey.

this is definitely plot-driven rather than character-driven. no one seems more than theatrically afraid of what is happening, and by the end, it just comes across as blasé: 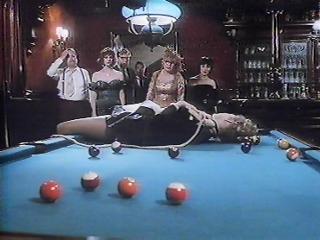 oh, another one. shrug.

BTW, i would love a YA retelling of clue, please.

but, no – i’m not gonna bitch any more. this is fine, for the younger reader, the teens who don’t have a million books on their shelves and are just looking for something quick and unchallenging.

don’t listen to me, i am old and stale.