this is another elaborately-wrought story about which the less said the better, but in broad strokes, it’s about a woman named rob who, yearning for a normal, unremarkable life after an…unconventional upbringing, has painstakingly created the home of her dreams; designing, renovating and decorating her safe little suburban nest, but her domestic life is in shambles—her marriage is almost theatrically toxic,* her eldest daughter callie is a death-obsessed and bullying daddy’s girl, while sweet young annie is fragile and sickly.

rob seems extraordinarily passive; accepting irving’s numerous infidelities, his violent rages and threats, studiously not-reacting to callie’s sly insinuations with the calm patience of a saint, but you know what they say: still waters do not fuck around, and when rob finds callie’s secret bone collection and has reason to suspect annie’s bones might soon be added to that collection, she takes callie on a road trip to sundial; her childhood home deep in the mojave desert for some tough love, hard truths, and difficult choices.

and—oof. tough, hard, difficult, those words are understating the vibe, as rob sits callie down for the creepiest mother-daughter bonding session ever, sharing the story of her childhood growing up with her sister jack isolated from the world-at-large on sundial’s sprawling compound, where their father falcon and stepmother mia were a pair of hippie scientists—if you can wrap your head around that juxtaposition—studying animal behavior by conducting research experiments on dogs. so many dogs.

that’s enough to entice you, yes? because this one is a haunting slow-burning doozy that’ll break your heart and give you goosebumps at the same damn time.

it’s a credit to her writing that i was caught so off-guard by this one. after an extended period of “WTF is going on?,” it’s one twist after another, but i should have seen that first sucker-punch coming after reading The Last House on Needless Street and that’s all i will say about that. shame on me, indeed.

it’s another masterful, delicious striptease of a novel, and while it probably plays too rough for sensitive readers (so many dogs), it’s a tremendously effective piece of psychological horror that, like The Last House on Needless Street, made me want to read it all over again immediately.

* this is some vicious marital sparring, boy:

“I’m going to wait,” he said. “For when this fighting is over, and we’re happy again. We’ll go to French restaurants like we used to. We’ll fall back in love. So deeply in love that it burns us to be apart. Then, one day—maybe we’ll be having breakfast, maybe we’ll be watching a movie. Something normal. But you’ll look over to me to make a joke, ask a question, and I’ll be gone. Then you’ll look for Callie, and she’ll be gone too. I’m going to leave you when you least expect it, and I’m taking her with me,” He looms over me and plants a kiss on my forehead, light as a dry leaf. “I’m smarter than you,” he said. “I’ve got endurance. I can wait long enough to make it really hurt.” He picked up his glass of water from beside the night table and hurled it at the wall. The sound was like the world opening. Glass flew like diamonds. Irving smiled at me. Then he got into bed and a moment later he was asleep.

when a glitchy thing happens six times in an ARC by a notoriously tricksy author, you have to wonder whether it’s a recurring typo or if you’re Miss.ing something.

i will wait and see

conclusion: typo.
and a lot more than 6 times. 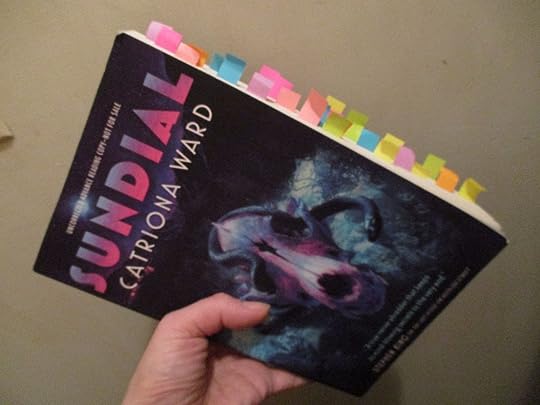