In our last episode, I introduced you to the two girls at the center of this podcast, Mattie Southern and Sadie Hunter. Mattie was murdered, her body left just outside her hometown of Cold Creek, Colorado. Sadie is missing, her car found, abandoned, thousands of miles away, with all her personal belongings still inside it. The girls’ surrogate grandmother, May Beth Foster, has enlisted my help in finding Sadie and bringing her home.

For those of you just tuning in, this is a serialized podcast, so if you haven’t listened to our first episode, you should do that now. We have more story than time to tell it – but I suppose that’s true for all of us.

this book is such a ballpunch.

i don’t even have balls, but i felt it – the sharp whitehot flashes of sudden impact; boof, boof, boof, followed by a deep nausea.

courtney summers is gonna ballpunch all of you.

this book’s got some things in common with The Female of the Species and Are You Sleeping, but it has a ferocity all its own, and as much as i loved the fierce energy of The Female of the Species, with its teengirl vigilantism and Hard Candy revenge-killings, Sadie is much darker and more realistic, which makes it much, much scarier. and if there are still any adults out there who think they are ‘too grown’ for YA books, think again, because although this is targeted at a teen audience, the quality of summers’ writing is better than many adult-market books i’ve read, and she doesn’t pull any of those punches – they hit and hit hard.

there are two narrative voices: the rawnerve howl of nineteen-year-old sadie, on the trail of the man she believes killed her thirteen-year-old sister mattie, and west mccray – the creator of the podcast The Girls, whose contributions are mostly in the form of transcripts from that podcast, with all the rounded-edged detached professional compassion of an NPR host.

sadie has zero rounded edges left. all she has is a car, a backpack, some cash, and a plan:

”She’s dead,” I whisper and I don’t know why this is the thing I choose to say out loud because it hurts to say it, to feel the truth of those words pass my lips, to have them be real in this world. But She’s dead is the reason I’m still alive.

She’s dead is the reason I’m going to kill a man.

sadie dropped out of school at sixteen to raise her sister after their addict-mother left, both of their fathers long out of the picture, and she struggled for years to make ends meet with her truncated education and severe stutter in a small-town trailer park full of bad memories and no prospects for the future.

For some people, the future ahead is opportunity. For others, it’s only time you haven’t met and where I lived, it was only time. You don’t waste your breath trying to protect it. You just try to survive it until one day, you don’t.

what she did have was her devotion to mattie, and with mattie gone, she’s got nothing left to lose and she’s a mama-bear incandescent with vengeance.

i’ll say no more, but oh, man, this is a powerhouse of a book. it’ll getcha.

might bump this up to five stars – gotta let it all settle.
review to come, but in short: magnificent. 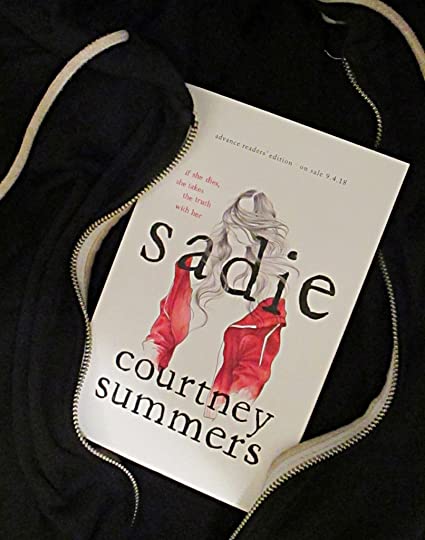 You are one of our Giveaways lucky winners!