Ravaged by the Gingerbread Man by Fannie Tucker

Despite his cheery smile and cookie buttons, despite his iconic status, this gingerbread man was no mere cookie brought to life. She had created a monster, a being of pure, unbridled lust.

when it comes to monsterotica, Fannie Tucker is one of the all-time greats.

not only did she presage Chuck Tingle in the category of “i can make ANYTHING sexxy, just try me,” with stories such as 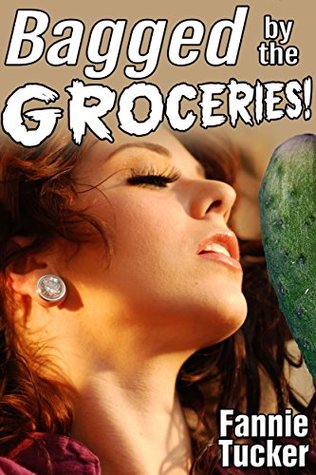 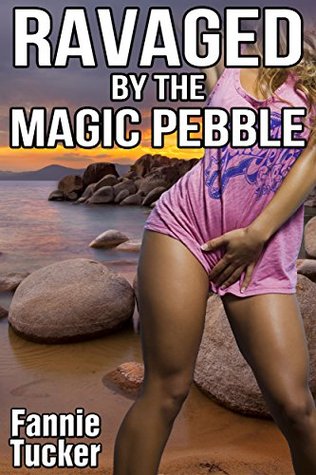 she also boldly reversed the natural order of monsterporn by substituting passive for active voice in the title of her seminal work I Fucked the Puppet. although scholars disagree about who is being fucked by whom in the text, there is no question that tucker’s use of the rhyming couplet is the work of a writer at the peak of her climax:

– This is the only face I’ve got! I’d like to bury it in your twat!

– You dance like a magical fairy! Between those boobs, my face I’ll bury!

longtime galpals kara and allison have been running a bakery together for about a year, and are preparing for the winter holiday rush. but kara is undone by math and miscalculates the measurements. by a LOT:

”I thought this seemed like a lot for a hundred cookies. Did we make a double batch?”

Kara winced. “No…we made ten times too much.” 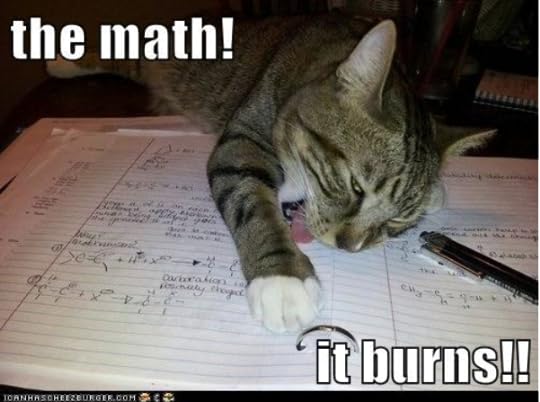 oh, dear. you would think a proper baker would have noticed that, right? or two bakers? who have been running a bakery together for a whole year? my recipe for gingerbread calls for 1 egg per three dozen cookies, and these damsels thought they were making 100 cookies, which should be about three eggs, if my recipe is the gold standard for gingerbread recipes, and it is. TEN TIMES more than 100 cookies and you’re talking about a significant number of eggs, my friend, 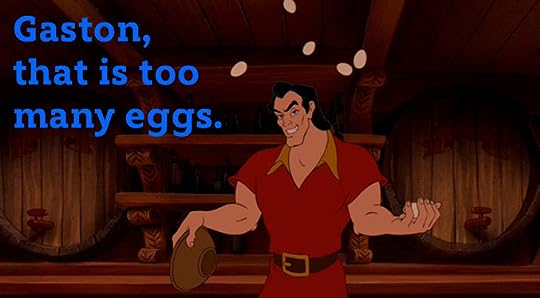 enough so a savvy baker would pause for a moment to lick the tip of a pencil and carry some ones. but they’re not very good bakers, or businesswomen:

Neither woman had really understood the hard reality of running a small business, and so far they hadn’t accomplished much, unless you counted draining their savings accounts and putting a strain on their friendship.

fed up with Kara and The Too-Many Eggs (Baby-Sitters Club Special Edition #45), alison leaves in disgust, abandoning her sister-baker for the snuggly arms of her man at home, and kara is left with a hundred pounds of sticky dough and a cloudlayer of despair, thinking, nobody on earth wanted this much gingerbread.

maybe not, kara, maybe not when it is just in a lump on your table, but what if….

struck by a jolt of inspiration, kara decides to make a full-sized gingerbread man for the shop window, just under six feet with a “big round head” and “blocky arms and legs,” 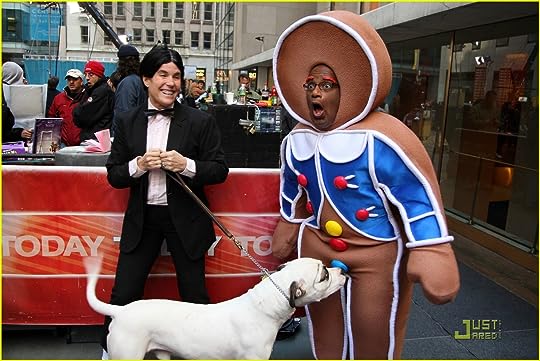 but again – measuring is hard and “there was still a bit of dough left, a cylindrical lump several inches long.”

when in doubt, make a dong. obviously she’s too much of a pro to leave the gingerdong on when it’s window-displaying time, but as a frisky impulse that anticipates the girlish giggles she and allison will share like some wide-awake slumber party, it’s worth it. after all, they could still display him in the storefront window after they broke the penis off. It would make a good snack while they decorated cookies.

so, into the oven goeth her man, and in a mere 15 minutes, he’s hot and ready:

Her gingerbread man had plumped a bit as he cooked, and his arms and legs were as thick as a real man’s. The penis she’d grafted onto his body had swollen as well. The pornographic confection stood enormous and erect, its tip almost touching the oven’s ceiling. Somehow, she’d gotten the shape of it just right, from the swell of its head to the slightly curved shaft. When she thought about what Allison might say when she saw it, Kara blushed. She hadn’t mean to make it that big.

and yet she HAD, apparently, meant to make it stand straight out perpendickular to the body, instead of in a penis’ more traditional ready position? erections, how do they work?

at any rate, kara goes to work, giving him eyes, a mouth, and some “festive trim” around his wrists and ankles

and kara looked over all she had made and saw that it was very good.

Her eyes lingered on his gingerbread member, and she felt a pang of longing. How long had it been since she’d gotten laid?

1) long enough to forget how erections work, amiright?
2) and long enough that fucking a cookie is looking pretty good right about now.

oh shit, should i have said “spoiler alert?”

spoiler alert – in this book, kara will be ravaged by the gingerbread man

”I wish you were a real man,” she said, putting her hand on the still-warm gingerbread man’s arm. The gingerbread man just lay there, cock and smile pointed at the ceiling.”

that’s a cold thing to say to a still-warm cookie, kara. especially one with some weird-ass half-mast mutant cock you designed so poorly. 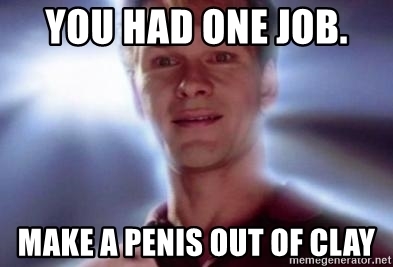 but then – a christmas miracle!! her gingerbread man comes ALIVE! and… he’s …. well, he’s all ready to be a real boy

He held a glazed donut in one blocky hand, and as she watched, he stuck it on the end of his big, doughy manhood. His gingerbread hips thrust up into the donut, but she’d made him too thick for the donut hole, and he split it in two as he tried to stick his cock in it.

OUCH! you play too rough!

fortunately, kara’s vagina is not made out of dough, and even though it’s been a while, the gingerbread man will find her donut hole more accommodating.

i need to take a moment aside to grin and giggle about Fannie Tucker’s particular brand of monsterlover. she certainly has a type, and this cookie is eerily reminiscent of dongo, the jolly titular puppet from I Fucked the Puppet: 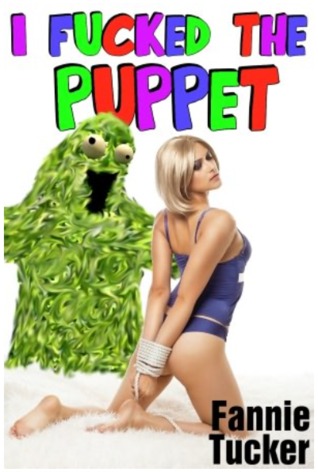 whose romantic patter consisted of those celebrated rhymed couplets delivered in a silly voice and punctuated frequently with the ejaculation, “uh-hoo! uh-hoo!”

this gingerbread fella, well he’s cut from the same mold. this is their meet-cute moment, with the crumbs of a fucked-to-death donut still spilling from his fist:

Grinning at her with his wide icing mouth, he spoke in a high, cheery voice. “Fuck! Fuck! Fuck! As much as I can! I need to fuck things, I’m the gingerbread man!”

and, because his utterances continue to be really first-rate, i need to share a few more.

–”Suck, suck, suck! As hard as you can! You’re gonna blow me, I’m the gingerbread man!”

–Strip, strip, strip! Take off those pants! You’re gonna be impaled on my gingerbread lance!

so, yeah, plenty of cookie sex occurs. kara is confounded by the fact that he has so many working parts she never gave him, like elbows and vocal cords and most importantly, a tongue, which she discovers when “she felt his sticky icing mouth nuzzle her crotch,” which sounds so messy and gross, and the whole sex act with a cookie seems creepy, especially after the afterglow wears off and she sees his little icing eyes are all but smeared away after he rubbed them all over her butt when he was spelunking. 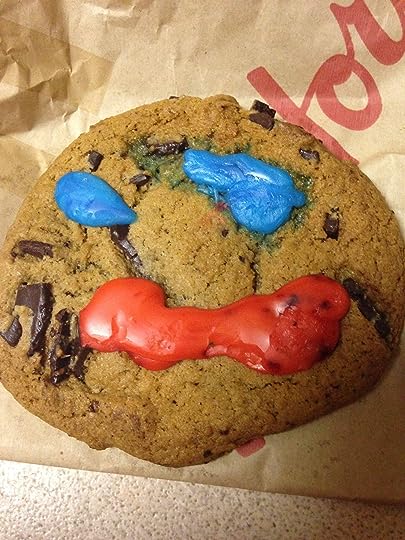 but she’s also shaken by her role in creating him – not only did she bring life into this world, but she created a sugary sex addict.

”This can’t be happening, “ Kara said. “You’re not real. I fell asleep or…and why are you so filthy? Gingerbread men are supposed to be sweet and crunchy, not nasty perverts.” 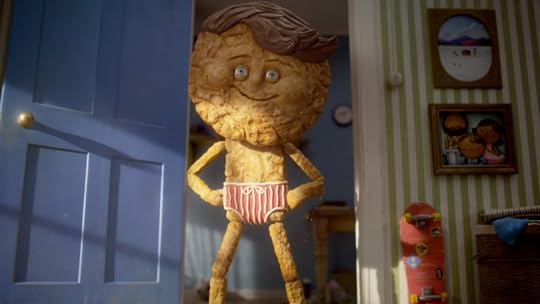 it’s a sobering thing for her, knowing she’s responsible for bringing such ick into the world, and she makes a vow:

She resolved to be more careful what she wished for in the future.

her shame and bewilderment do not last very long at all, with the beautiful simplicity of monsterotica:

and all of the other sensations a cookie can ignite in a lady.

“Pleasure swelled inside of her, rising like a perfectly baked soufflé, and she moaned. “Oh god, I’m gonna come, gingerbread man!”

maybe she’s a baker after all…

“No, no, no! Your pussy is wet! But you’re not quite ready for my gingerbread yet!”

and then he… uses a rolling pin upon her in a most unsuitable way, committing many health code violations. of course, splayed all over the table as she is, she’s already left that A from the health inspector far behind, especially since this is all happening right in front of that giant picture window like she’s in some gluttonous peep show. 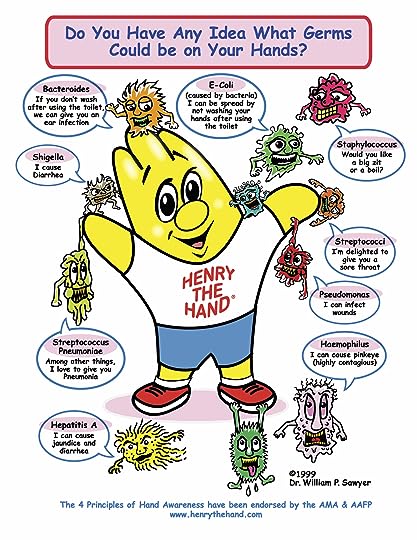 what i learned – a rolling pin is a poor lover

but so is a man who is also a cookie:

She clawed at his back, raking deep furrows in his doughy flesh that left chunks of gingerbread beneath her nails. 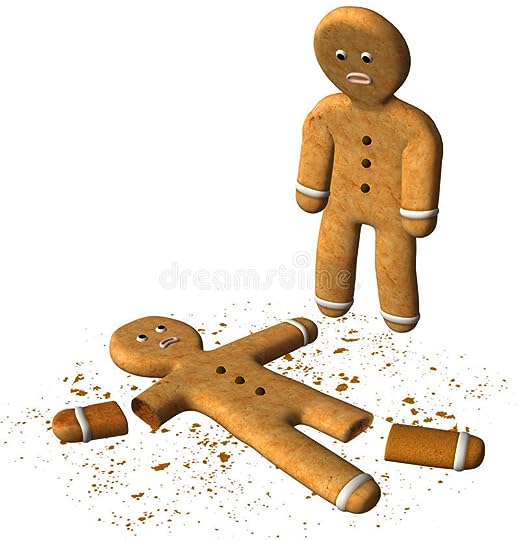 and finally, the moment you’ve all been waiting for

WHAT COMES OUT OF THE “FAT LOAF” OF GINGERBREAD PEEN?

ever the professional, kara risks looking her gift horse in the…mouth, putting business before pleasure.

“I’ve never tasted anything like …that.” She gestured toward the gingerbread man’s crotch. “Can I get the recipe?”

way to ride the afterglow, kara.

and then she’s waking up on the floor of her bakery – no pants, no shoes, “frosting” in her hair, and allison is tarriving with apologies for their fight and praise for the magnificent (clothed, unpeened) gingerbread man in the window and the tousled kara is very excited to tell her all about the new recipe she’s planning on “whipping up,” although the recipe given to her from misterginger sounds exhausting if we’re talking about a holiday rush, i worry that kara might be sucking at math again.

i leave you with this: