Back on earth, some people didn’t have houses. Meanwhile, some houses didn’t have people.

this is a short, spare book, but it is not easily dismissed. even though the white of the pages outweighs the typed-in bits, 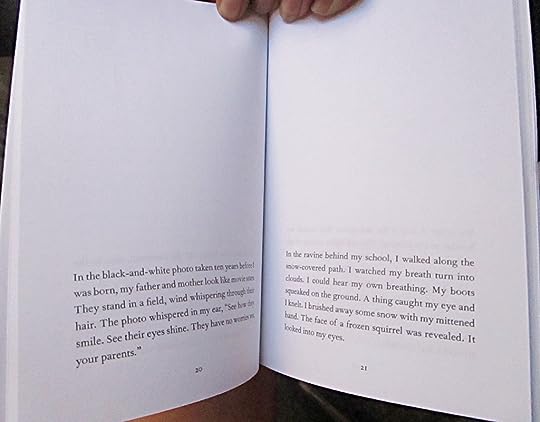 those typed-in bits are lovely. for example, on that left-hand page pictured:

In the black-and-white photo taken ten years before I was born, my father and mother look like movie stars. They stand in a field, wind whispering through their hair. The photo whispered in my ear, “See how they smile. See their eyes shine. They have no worries yet, your parents.”

the book is made up of surreal moments, poetically told, and is apparently an homage to a book by toby maclennan – 1 Walked Out Of 2 And Forgot It, a book so obscure that stuart ross is the ONLY person to have reviewed it here on goodreads, and only one of four to have rated it.

it’s lovely stuff—glimpses of scenes that make up a story half-told, half-implied, focusing on themes of death, loss, nostalgia, childhood, and memory, but it’s never lugubrious; it’s haunting, not haunted.

The headstone stood in front of me. It wore rocks on its head. It watched me shift from foot to foot in the cold, watched me jam my hands deep in my pockets. It saw my lips moving and heard sounds come out, but it didn’t understand language. My eyes were red and filled with tears. The headstone just stood there, waiting for me to leave: It’s the same thing every time. He just comes up here and stands right in front of me and his eyes turn red and sounds issue from his mouth. Where are the rocks on his head? Where are the words carved into his chest?

there are plenty of recurring motifs: telephones, ghosts, snow forts, squirrels, spiders, shadows and light, stones, the kennedy assassination, ambulances, and yes—pockets; pockets that are empty, pockets desperately filled with shadows, pockets that hold what is valued. and as a bonus, this book fits in the pocket of a fashionable fleece vest! 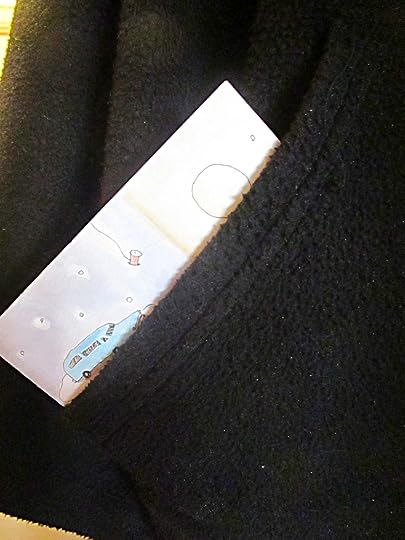 it’s full of doppelgängers, and otherwise shifting, fluid identities, creating a pleasantly dissociating vibe. plus, the girl next door is named karen, which is a pretty cool name. it also shifts nicely between the surreal and the decidedly banal:

Across the border, in Vineland, New Jersey, I chased fireflies around on my aunt’s lawn and tried to put them in a jar with holes punched into the tin lid. I looked at them more closely and saw they were tiny ambulances with their lights flashing. My aunt came out to call me for dinner and found me crammed into the jar instead, my curly hair poking up through the breathing holes. “After we eat,” she said, lifting up the jar that held me, “we’ll go to the casino. I go to the casino every Saturday.”

i’m a fan of mr. stuart ross, and this book is just one of the reasons why. here’s hoping that more than four people on here give this one a chance, because even though it is short, it’ll get its hooks in ya. also, the back cover copy promises that Every reading brings a new revelation, which makes it like many books in one!

one more excerpt for the road, on the road:

A boll weevil curled up into a tiny grey ball on the grey curb. It rocked slightly in the warm breeze. A 1966 blue Ford station wagon rolled by. Neither the boll weevil nor the station wagon was aware of the other. A sprinkling of rain began to fall. Soon the entire road looked like it was covered by shadow.