oh, man – here i am, trying to review this book a) months after i read it and b) days after i finished reading the second part, No Way. will i mix the two plots up in my head, like some outer space cocktail? will i leak book 2 spoilers like an outer space cocktail served in a cracked brandy snifter? why am i serving a cocktail, outer space or otherwise, in a brandy snifter, cracked or otherwise? what a social blunder – have i no sophistication? am i babbling on and on like this to avoid the leaking of the spoilers and my likely defeat by my memory lapses or just being the kind of lazy sod who thinks this smoke and mirrors nonsense is cute or welcome or even an effective gaslighting tactic? 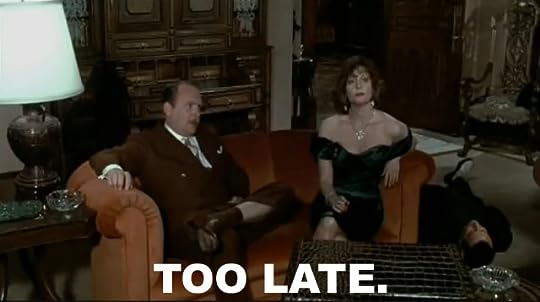 seven convicts are offered an opportunity by panopticon, the not-at-all diabolical corporation who owns many private prisons, has fingers in many other business pies, and is interested in colonizing mars: would you prefer to stay in prison here on earth, or would you rather do this thing for us on mars and live out your remaining years in freedom, albeit a very specific freedom, because where ya gonna go? the criteria for recruitment is very specific and again – not at all diabolical:

We are seeking inmates who fit the following profile:

— serving either an indeterminate life sentence(s) or a fixed-term sentence(s) that extend beyond the inmate’s natural life-span.

— has had a prolonged period (5 years +) of no contact with anyone on the outside: this includes, but is not exclusive to, family, friends, previous employers and/or employees, lawyers, journalists and authors, advocacy groups, external law enforcement, FBI, CIA, other federal organizations including immigration services.

— is not suffering from a degenerative or chronic physical or mental condition that would cause death or debilitation in the immediate (5 years +) future.

— is currently in reasonable physical and mental health, between the ages of 21 and 60.

so – these particular criminals were selected because of their specific individual skill sets, handpicked from the intel in their prisoner dossiers, which also included very useful psychological data. third time’s the charm: not at all diabolical.

these ladies and gentlemen were chosen, given a very intensive six-month training period (because that’s plenty of time to be physically and psychologically prepared and learn everything you’d need to know to go LIVE ON MARS, yeah?), and then sent up on their merry ways – expendable bodies, cheaply bought – off to mars to construct a base for NASA to live.

frank kittridge, serving 120 years for shooting his son’s drug dealer (i.e. – a criminal but still sympathetic-to-readers because WHO CAN BLAME HIM?) is our POV for this story, and he is a special case – frank is told, conspiratorially, that after they finish building, instead of spending the rest of his life on mars, like the rest of the criminals, HE can go back home, sentence commuted, to possibly try to build a relationship with his son, if not his reasonably-estranged wife.

not a bad deal.

but mars is a harsh planet, and accidents will happen, even to fake-astronauts (IS THAT REDUNDANT?) who have had six whole months of training. but as the accidents and accidental deaths increase, frank begins to doubt they are accidents at all!

it’s technically the very opposite of a locked-room mystery while still performing the same function as one, and EVERYONE IS SUSPECT IN SPAAAAAAACE!!!

it’s a fun murder mystery/conspiracy/outer space adventure, but i have a few reservations about the rationale of sending co-ed criminals off into space together, and even more reservations about how the book treated this situation, not even mentioning the likelihood of what would happen when men and women who had been removed from the charms of the opposite sex for so long, regardless of attraction, regardless of the nature of their crimes, were suddenly put in a “what’s it like to boink in space?” setting, with or without consent. not that i want to read spacerape, but it’s something that needs to be addressed, even if it’s only the absence that’s being addressed, ya know? it’s the same issue i had with the otherwise-spectacular FantasticLand – i know it’s a drag to write, and no one wants to do it, particularly if you’re a male writer, leaving yourself open to accusations of being gratuitous or misogynistic or whatever, but as a lady-reader, putting myself into this scenario as one of the female cons and the “now i am living in a verysmall space with many male convicts and very little supervision, and… they are giving me my own sleeping area? and i am remaining unmolested throughout the night? this seems unrealistic and now i am even MORE suspicious.” it’s a thing that needs to at least be acknowledged as a factor in this scenario, which is already wildly unrealistic, so i’m probably just being silly here, but i’ve been trained to SEE SOMETHING, SAY SOMETHING by the MTA, so.

anyway, this book is criminals in space, with murder. 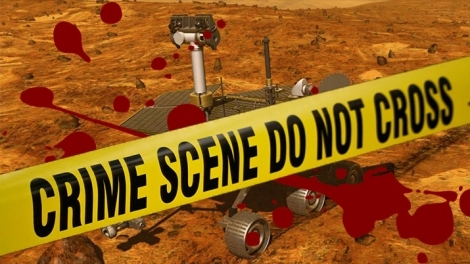 when i review No Way, you will learn what that one is about.