Now We Paint Worlds by Matthew Kressel
My rating: 4/5 cats

“I surprised her, you see,” he said, grinning, “as you would be surprised if this insect suddenly spoke to you. Hri and her sisters have been aware of Origin Earth since the first multicellular creatures swam in its oceans. And they did not pay us much heed, even as we spread across the stars, because our works were so small and transient compared to (missing word [sic]). They did not think it was possible for us to develop the states of consciousness necessary to commune with them.

“Yet my mind, out here at the galaxy’s edge, unpolluted by the noise of humanity, refined by meditation, sharpened by fasting, touched their realm. I swam in cosmic seas you could not comprehend. I saw all time and space spread before me like an ocean, past and future intermingling in universe-sized waves. “This”—he waved at the meadow—“is nothing compared to that.”

over the past few years, i’ve experienced a particular kind of embarrassment; a sort of helpless secondhand shame as someone supposedly representing ‘me’ and ‘my’ values became the public face of the place where i live, and struggling to parse their through-the-looking-glass perceptions of how anything worked; individuals, society, science—my typical #mood became “aghast,” every day i wanted to apologize to the rest of the planet for shit that wasn’t my fault, and it was hard to know whether to gallows-laugh or be fucking terrified.

this story captures that feeling and amplifies it. ‘cuz if there are powerful higher powers to whom humanity is no more significant than an anthill or a beehive is to us, the consequences would be catastrophic if the first person they met was some self-aggrandizing misanthropic douchebag.

let’s be on our best behavior when the planet-crushing entities come over, mmkay? 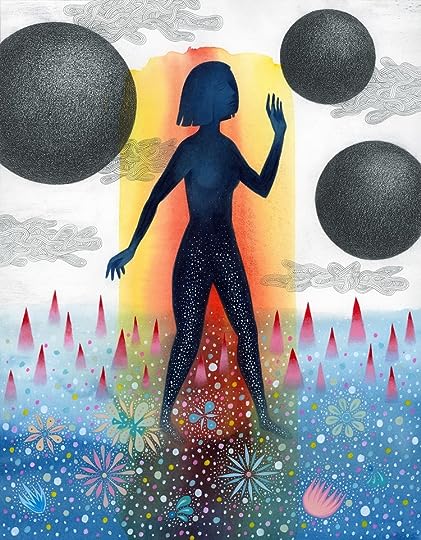