Moon Up, Past Full by Eric Shonkwiler
My rating: 4/5 cats

this has been waiting about three months for me to review it.

which is not the most shockingly behind in a review i have ever been, but it’s pretty bad.

part of it is that my life is horribly crazytown, part of it is because i’m still figuring out how to handle reviews of short story collections, and part of it is that i have an e-copy of this, so it’s not there in the stack of to-be-reviewed books on my windowsill glaring at me every day like some others. (I SEE YOU, family unit—and i will get to you!!)

short stories are intimidating to review. the overachiever in me always wants to review each story individually and in detail but the me that is more than 40 reviews behind just wants to mumble-type “this book is good,” slap a picture of a puppy on it and then go back to procrastination/panic/hiding from the world in my little cave.

this collection of stories and novellas IS good. and because of that, it deserves a little more than a picture of a dog before i scurry back to cave. i’d already read the author’s novel, Above All Men, so i knew what to expect in terms of the clarity of his writing and the strength of his imagery, but i think i liked these stories even more than i liked the full-length novel, which is something that nevernever happens.

when i sat down today to try to organize my thoughts to finally write this, i totally got sucked back into the book again and ended up reading several stories over again in their entirety, which is very bad for productivity. i found that many of the stories had stuck with me, and it was a happy journey of “oh yeah THAT one!” and “oh i forgot this one was by this guy!”

there’s some minor crossover between the stories, but for the most part they are unconnected. popular themes include family, the interlocking concepts of regret and nostalgia, attempts at returning home or going “back,” with the understanding that some things are gone for good. it’s mostly written at that intersection where steinbeck meets hemingway that characterizes the best of grit lit—all that quiet brutal humanity populated by the sympathetically downtrodden still tough and ready to fight, but there is a dusting of the supernatural, and it’s not all tough-guy bravado—shonkwiler is equally skilled at writing in a female narrator’s voice, and in writing characters of any gender who are tender and yearning. also, zombies. maybe.

He wanted for once in his life to deserve the way he’d been treated. There’s been no rewards for behaving.

a strong open to the collection, documenting the quiet and gnarled failures of a family. like several in the collection, there’s an emphasis on the distance a character finds themselves from their past—a strong childhood memory serving as an anchor or a bruise to press against in those moments of self-flagellating sentimentality, a reminder that even the most broken-down, barroom-brawling man has memories of being a little boy and a longing To roll down a hill, to have a child’s inertia.

the descriptions in this one just freaking sing off the page. it’s not my favorite in the collection, but that didn’t stop me from reading it twice more today.

For the Man After Me

god this is a perfect little story. it’s about a man who illegally strips abandoned or crashed vehicles for parts before they get towed away who has a very challenging day at the scene of a car accident.

it’s written so vividly—the car, the snow, the attention to details like the tap out necklace on the rearview mirror and the carhartt jacket—it’s crystalline. and when it needs to pull back from the situation and pull a tasteful curtain of vagueness across the action, it does.

He wonders how the poles are strung a hundred feet apart, yet people always seem to hit them, never pass on through into the field or to someone’s yard, something harmless.

with a couple of tweaks in the direction of the genre’s typical content and a firm commitment to a paranormal explanation instead of the deliciously ambiguous events in this story here, if shonkwiler ever wanted to go into the urban fantasy market writing powerful female characters who administer justice for crimes against young women everywhere, i would buy those books.

bigger than buffy, i’m telling you.

i adore this story. it’s a perfect grit lit/crime fiction mashup which takes its time getting to where it’s going, making sure it puts all its ducks in a row so it can sit back and enjoy its giant middle finger of an ending.

a giant thumbs up to that middle finger.

Look, he said, I’m all for survival. But there’s a line between that and being dicks. It’s not like this bus is on your property or somethin’. What if this guy’s just out for a walk? He comes back, and we took all his food?

this is the first novella in the collection, clocking in at about 50 pages. it covers the paranoia, misinformation, and confusion resulting from the onset of a disease that is characterized by zombie-like behavior and the experiences of a few people waiting it out in the isolated cabin of a survivalist.

i read pretty widely in this general area, so a lot of it felt familiar, but i definitely enjoyed the creeping-dread tone, and wondering where this was all going to end up, since it’s pretty different from the other stories in the collection. although, like anything else, transplant the action to another location, strip it of its parts, and it’s a story like any other story—people just struggling to get by.

There’s about an inch between you and hell at any time; do you know that?

that is one of the twenty-two sentences that make up this super-short story. it’s kind of jarring/kind of genius to place this one directly after that long novella, and there’s not much more to say.

this is one of the stories written in a woman’s voice; the voice of a mother taking her young daughter on a road trip to see snow in a world where snow is so rare, its presence is a tourist destination at a single location with a visitor’s center, tickets for sale, and capacity-regulations. it’s all a little like 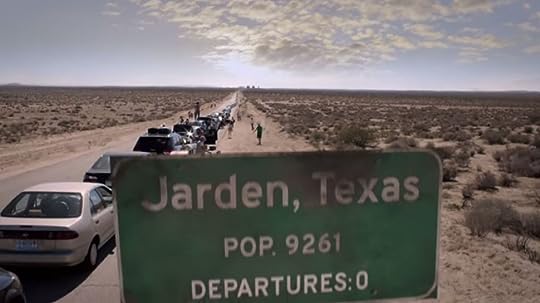 and it is just as profoundly sad and moving. this story fairly gushes with maternal love as more of this family’s story and its particular complications are revealed, and the voice is spot-on perfect. i always enjoy when a writer has range, and this is a very strong departure from type.

The interstate is straight for miles. The land reminds me of driving into Iraq. It doesn’t look like it, really, but it’s flat and dry and it’s not home. There’s enough heat in the air, and dust, that the green I know is there in the crags of the drying riverbeds and on the slopes of the broken canyons is yellow. My head does the rest. I’ve got the windows rolled down because the AC is broke, and at one point, I reach to put my rifle in the window—no rifle. My finger was even checking the safety.

it’s fear and loathing with ptsd as two damaged and disconnected soldiers experience difficulties reacclimating to life after service and so go on a cadillac road trip filled with drinking and drugs and fornication with ladies and it is full of memories like this:

A week goes by in a stupor, drunk and high and doing drugs I’ve never even seen

We’re doing ninety with my head hanging out of the passenger window, and I’m vomiting in a mist down the side of the car.

but it’s not all just brain-scouring partytime, because not even a boatload of drugs can salt the earth of what these men have seen and done, and although it certainly feels like a carnival for much of the story, there’s a hangover hovering over it all, waiting to strike.

it is beautifully done.

this story is only 18 pages long, but it feels much longer. it is among my least favorite in the collection, although i can definitely see other readers liking it more than me.

there’s nothing wrong with it—the writing is as good as in any other story in the collection, but it’s a quiet one—a trip down shitty memory land as an estranged family of two brothers and their mother reunite to make arrangements for the disposal of the body of the abusive man who hurt them all for far too long.

i am again impressed with shonkwiler’s range as a writer, but the story didn’t push my personal readerly buttons.

You two are ripe with ailment.

this is a kind of southern gothic with a western overlay.

see what i mean about range?

i’m not even sure how to describe this one, but i liked it very much. some of it was confusing and i don’t know if it was me or the story, but i am a person who can enjoy something without having to fully “get” it. which is good. for my sake. it’s another longer one—27 pages—but it’s one i would have read 27 more pages about, especially if those additional pages cleared up the confusion i had. some people will likely find this messy or mishmashy, but i kind of liked its trajectory from hospital to medicine woman, with family seeeecrets and social commentary and book burning and its heroine rene who is a log-splitting, horse-riding, calloused, redheaded bookworm who works in the meat trade and must save her mother from her unstoppable nosebleed and figure out how to make ends meet.

it’s much better than i am making it sound.

i am not good at reviewing short stories.

this one is only 12 sentences and i have not one thing to say about it.

I took a seat near the door and nodded at the others sitting across from me, a stringy-blond girl and a couple of guys who looked like they’d be doing meth in an hour.

this is one of the overlap-stories—this one both directly references/presents as an anecdote the entirety of “my wakeup” and also features a drug dealer character named lonnie, presumably the same lonnie who is the jailbird brother of the man in “gripping the heel.”

…thinking of leaving the town again. Everything good about it was over with, couldn’t be had anymore. Memories with friends, some dead, one in prison. Others just gone. Nights running from the cops just to run from them, to give them something to chase. High off our asses, throwing a shovel at the moon.

basically, the replacements should reunite and set this book to music.

this was one of the ones i had forgotten, but as soon as i reread the opening lines this morning, i was like “oh yeeeah—this was good!”

No Toil, No Tranquility

another broken man who means well but is inadvertently alienating his family through his emotional clumsiness and the shitty cards life has dealt him, just trying to save his family any way he can.

if i had a heart, it would be dead with sad from this.

this is a wonderful collection that it took me way too long to review but it will not take you too long to read and i know you will then do a better job reviewing it than i have here.