wheelbugs and spiders and salome, oh my!

sometimes i think tim powers doesn’t love me as much as i love him. or maybe it’s just that he looks at my goodreads page and sees i have only read three of his books before this one and he just doesn’t understand that it’s not always about quantity with me; that i love The Stress of Her Regard SO MUCH that even if i’d only read that one single book by him, it would still be tru luv 4eva. 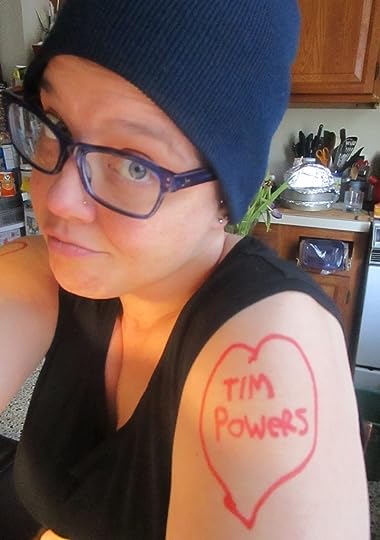 because sometimes i felt that this book was really just out to get me.

allow me to invite you to my inconsistency party:

* one of the things i love about tim powers is how little he cares if you are keeping up, as a reader. he’s going to tell the story he wants to tell and if it takes you a hundred pages to realize you are reading the best book you have ever read about byron, well, that’s your problem and you’ll reread those early pages later when you know exactly what’s going on and be better for it.

* i love it when authors like david mitchell or jonathan carroll or books like The String Diaries invent all-new mythologies and introduce the reader to creatures or rituals they will not encounter anywhere else.

AND YET here, i felt like tim powers was mad at me and absolutely did not want me tagging along to where he was going. i have difficulty processing stories about time travel and alt-universes and butterfly effects and all that and this book is conceptually similar to that but also completely different so i was adrift pretty early on. you know how if you read a lousy book about vampires that is poor in its descriptions you can still fall back on hundreds of years of vampire lore to fill in the blanks and at least muddle your way through? well imagine if there were no vampire books ever. and i’m not saying that this is poorly described or not well-written. i’m just saying my brain has always balked at abstractions and this being a whole new kind of abstraction my poor fingies were slipping off the ledge from the get-go.

greg was fortunate enough to get an arc of this through work, and he generously let me read it first because he knows i love tim powers and he thought this was a haunted house story because that’s what the back cover wants you to think. but it’s not, strictly speaking, a haunted house story. it definitely has elements of gothic horror and there’s a big crumbly house and the restless dead, but that’s all layered underneath a much less typical version of a haunted house story that owes way more to science fiction than horror. from the back cover (‘cuz i’m never going to be able to explain it myself):

A collection of hypnotic eight-limbed abstract images inked on paper allows the Maddens to briefly fragment and flatten time – to transport themselves into the past and future in visions that are both puzzling and terrifying.

it is full of sentences like this (and i don’t consider this is a spoiler, even though it comes towards the end of the book, because it makes no sense out of context, and it only half makes sense (to me) in context):

Madeline’s eyes widened and she nodded. “So when you look at it right now, you’ll be the Scott who looks at it later, after you’ve found out where she is.”

He nodded. “Hurry. But don’t look at it yourself.”

“It doesn’t make sense. You’ll find out where she is now because you’ll eventually know where she was now?”

“Spiders see it all at once, not divvied up into then and now and later. Hurry!”

i’m with madeline in the “it doesn’t make sense” camp.

but it does make sense, to people whose brains work that way. there were plenty of times i understood what was going on and got caught up in the momentum and i gleefully thought “i get it! i get it! this is fun!” but then something else would happen to confound me and i would stumble and growl like an angry dog.

on the one hand, this might be the kind of book that is better on the second read. but what if it’s not? that would be like not liking kids but having a baby anyway because everyone claims it’s different when it’s your own and then discovering that’s completely untrue and then you’ve wasted lots of time rereading a book. or birthing a kid. same thing.

so even though i know i didn’t enjoy this book as much as i’d been hoping to, there are still plenty of things that even dummies can appreciate. i love how scott, in particular, feels ripped right out of some eighties movie with his long-haired motorcycle heroics and his aol account. okay, so aol is post-eighties, but it’s still wonderfully throwbacky since this takes place in 2015, and since i thought i was the only one still using aol, i feel like this is tim powers saying hello to me, and that is very cool. hello from the shortbus, tim powers!

i also loved the synchronicity of my having read this book, featuring rudolph valentino and natacha rambova, the same week that american horror story ALSO featured the pair, and that since this book doesn’t come out until january, i am likely the only person that will ever have this image in their head: 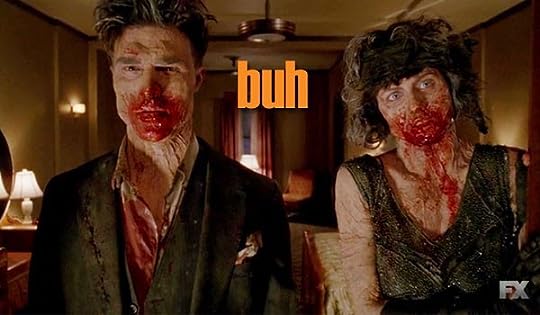 while reading about their old-hollywood glamor. (there’s a sort-of similar treatment between the two storylines which is kind of neat to have experienced back to back, although i’m not in love with this season apart from the costumes and soundtrack)

also, cool page design, even in the arc: 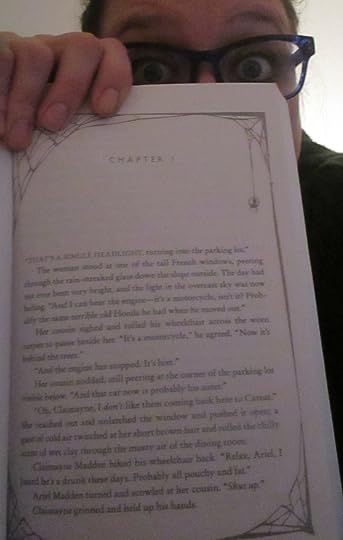 and best line award goes to: “She loves you the way a drowning person loves somebody they can push down and climb on top of.”

so, while i still love tim powers and i am not covering up my tattoo, this is not my favorite of his books, even though there are enough great scenes that i liked it even when i was drowning.