Love Me by Danger Slater
My rating: 4/5 cats 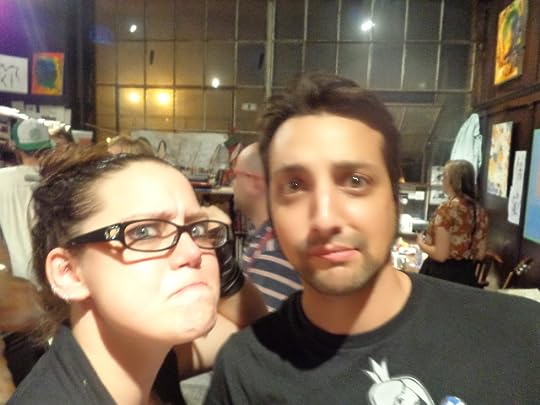 DO IT FOR DANGER!!

this book was a rollicking bit of occasionally dirty-minded fun.

what is it about, you ask? shit, i didn’t expect to have to answer this one. okay. well—it is about a very self-confident man who lives in a castle of human skulls surrounded by a moat of crocoweilers, who is horrifically lonely, hundreds of years old, and seemingly invincible. it is also about gangs of geriatric mall-thugs, free pie, hippies, toasters, the university of phoenix, ratsecks and finding true love.

and also how annoying the moon is. which is my favorite part, and reinforces my notions about the moon and how i hate it so.

it is about more than this, and less, and is a fun strange journey through the psyche of a delightfully deranged author. like vonnegut, but with more erections. by which i mean statue erections, naturally.

…they’ll erect a shrine to me, a giant statue right off Ellis Island. My statue will be punching the Statue of Liberty in the face for being such a weak and inferior statue. It will also be calling her a whore. That’s right, my statue talks! People would gather at the base of my statue and dance and copulate and drink wine and spirits and chaos will rule and birds will fly backwards and that dude who hosts Wheel of Fortune will spontaneously combust on national television in front of thirty-five million horrified viewers and it’ll be I who will save mankind!

On the plus side, it was my massive, veiny, throbbing erection that single-handedly kept Levi-Strauss in business during the Great Depression.

also, there are pictures! so it is like shel silverstein! with more poop-jokes!

…take your shit! Take your shit and admire it. Love it. Cradle it in your arms. For it is a piece of you. Take your shit. Take your shit out to dinner. Order the roast duck. Have a moderately-priced glass of Sauvignon Blanc. Tip the waiter generously. Take your shit to Niagara Falls. Stare at the wall of water in wonder, just you and your shit together on the railing as the waves crash on the rocks below. Go on the Maid of the Mist. Later, ride in the Skywheel. Propose marriage when you reach the top. Your shit will say yes because your shit loves you too. I command you to take your shit on a honeymoon to Punta Cana. Sip margaritas on the beach. Make love to your shit under the orange sunset. Fly home first class. Rent a loft together in a brownstone on the outskirts of the city; nothing too flashy, but enough for the two of you. Make Wednesday night movie night. Visit the in-laws once a month. Raise your kids agnostic. Retire to Boca Ratan.

i mean, it is silly, sure, but the fun kind of silly, not the eye-rolling kind.

extra points for use of the word “callipygous,” which is one of my favorite-ever words.

love me, love the book, have a great day!!