Life After Life by Kate Atkinson
My rating: 5/5 cats

kate atkinson has written a lovely, accordion-fold of a novel here.

this is not a jackson brodie novel, which are always much better than your typical detective novels, (even though i haven’t read the last one yet – merp), but this one is just so much more ambitious in scope and style than even those gems.

at its most simplistic, it is about ursula, a character who will be born and die all in the first two pages. (excluding what i am considering to be a prologue) and then again. and again. she will die from falling off a roof, from drowning, from gas-inhalation, but she will be reborn again to live a collage of different lives, but always as ursula, and always surrounded by the same family. sometimes she can remember her past go-rounds, in hazy half-memories, and sometimes she can remember more, but this is not some hippy-dippy exploration of spiritual reincarnation. i have never read a book that is more human, more terrestrial. it is not necessarily about “getting it right” although you cheer inside every time she manages to avoid the decisions that led to some of her more horrifying deaths. it is more about our possible paths, about family, about history.it is about ripples and traps and the horrors of war.

and, oh, war. i have read many books about england during wartime, whether it be I or II. but never have i read one with more immediacy than this one. she does such a fantastic job with this particular material. not just the parts that you would think i would respond to, being of a ghoulish bent. the “recovery of the bodies” scenes were very graphic and haunting and shivery, yes, but i found myself responding not to the shocking descriptions, but more to the quieter scenes, the ones which are focused on the national character during wartime.

the englishness of this novel is just brilliant. there is such a pervading sense of “one does as one must and then one has tea” throughout.

On the way back from lunch, Sylvie said she wanted to visit Oberpollingers and buy a present for Hugh. When they reached the department store they found the windows daubed with anti-Jewish slogans and Sylvie said, “Gracious, what a mess.” The shop was open for business but a pair of grinning louts in SA uniform were loitering in front of the doors, putting people off from entering. Not Sylvie, who had marched past the Brownshirts while Ursula reluctantly trailed in her wake into the store and up the thickly carpeted staircase. In the face of the uniforms, Ursula had shrugged a cartoon helplessness and murmured rather shamefacedly, “She’s English.” She thought that Sylvie didn’t understand what it was like living in Germany but in retrospect she thought that perhaps Sylvie had understood very well.

i love that passage, on at least three different levels. the brisk insouciance of a mother accustomed to living in an imperial nation, the shame of a transplanted daughter living in a changing country whose climate she is becoming a part of, but doesn’t yet fully understand, and the latent judgment passing as ignorance.

and this, which perfectly sums up the english spirit:

“No point in thinking,” she said briskly, “you just have to get on with life. We only have one after all, we should try and do our best. We can never get it right, but we must try.”

i loved that about this book. it is practical, unhysterical perfection. there is a determination to these characters in the face of horrors and lives lived always on the brink of destruction that is admirable and almost uplifting. you know, if it weren’t for all the bombs.

this book killed me, it really did. and then i was reborn, as a reader. it is such a labor of love; you can feel how much thought atkinson put into it, with all of its carefully-sprinkled echoes from former life-plots, and how lovingly-rendered are even the smallest supporting characters (mr. emslie!! ♥).

obviously, i love izzie, the free-spirited drunken floozie of an aunt, even though she is such a selfish character. but that’s kind of what this book is about – how when we are living our lives, we miss a great deal of what is happening around us, and if we had a chance to step back, to see the bigger picture, we might make different decisions, and in some cases, we could change the course of history.which sounds trite, but kate atkinson is a much more accomplished writer than i am, and this book is an absolute triumph.

you will have to wait until april to read this, unless you are greg, and are getting it friday, and then it will be mailed off to canada to bill. and it is a beautiful-looking arc: 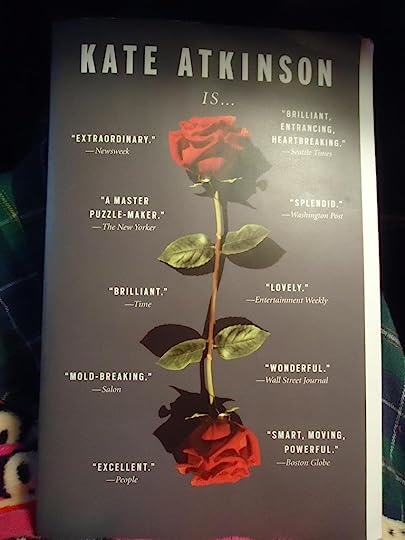 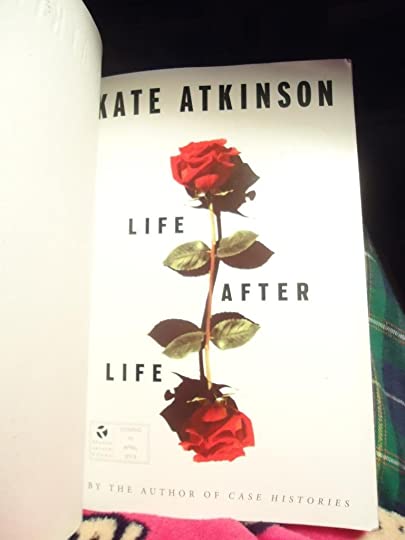 so i am sad to see it go, but one does as one must.