extry points given to me, by me, for choosing a book that i have owned for more than a year. super-extry points for selfishly using the opportunity to interview nancy pearl for my own personal readers’ advisory needs, to suggest a celebrity memoir that wasn’t gonna waste my time. thanks, nancy pearl!

my tepid reaction to this book is in no way the fault of nancy pearl, who gave me exactly what i’d asked for:

any type of celebrity; any gender, age, race, or currency, and my only criteria is that it be more substance than flash, and that it not follow the narrative-arc-cliché of “early success ruined by overindulgence in perks of success leading to downfall, followed by peace and self-reflective wisdom.” Good stories, decent writing, humor a plus.

i just didn’t respond to it the way i’d expected/hoped.

on the one hand, patti smith writes a highly detailed account of what it was like to be young and poor and artistically ambitious in the creative powderkeg of new york city in the late 60’s-70’s.

on the other hand, patti smith writes a highly detailed account of what it was like to be young and poor and artistically ambitious in the creative powderkeg of new york city in the late 60’s-70’s.

the details killed it for me. there’s so much here that feels like an itinerary – what they wore and where they walked and all the trinkets they collected, photographed, then lost along the way, and it’s a focus on props at the expense of any emotional appeal – what should be an intensely moving elegy for youth, for new york, for power-twin/bestie/lover mapplethorpe, 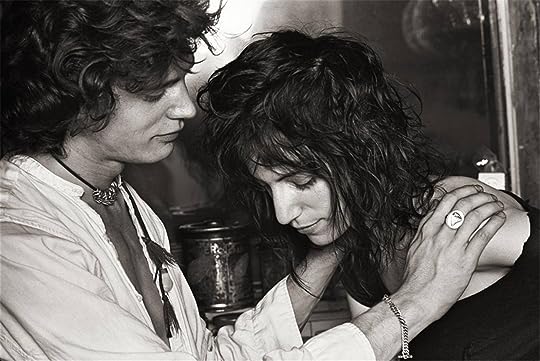 is instead frustratingly detached and the reader is kept at arm’s length with details about ribbons, huaraches, hats, haircuts, portfolios, and grilled cheeses.

it is, as nadine astutely points out, both listy and emotionally distant.

smith mentions more than once her “flexible imagination,” so the improbable “i remember every moment of every day, many of which had tremendous import/foreshadowing/symbolism” slant is somewhat mitigated by poetic license, but it’s equally true that pattiandrobert’s days had a disproportionately high level of import, just from the circles they were lucky enough to break into across the entire spectrum of the arts – music, literature, theater, painting, photography, every one of them bristling with mentors generous with their time, advice, introductions to still more luminaries, raw materials for their artistic pursuits, and other gifts that pile up into those listy details; a sweater from jackie curtis, a tattoo from vali, a guitar from sam shepard, Crosses of braided hair, tarnished charms, and haiku valentines made with bits of ribbon and leather and on and on &etc.

and the things that most interested me were often floated without introduction or context; surfacing and withdrawing – her buying and selling of used books, her reviewing records – just mentioned as “things i did” without any of the details so very cluttered elsewhere. one does not just casually mention finding a twenty-six volume set of the complete henry james in perfect condition and reselling it in a mere two sentences.

and how does she get to go to paris three times when she can’t even afford to eat some days, and she and robert are splitting sandwiches? true, her parisian hotels were rundown and lice-ridden, but given the choice between lice and finery, i’m pretty sure patti would have chosen to slum it after a quick WWRD* consultation in order to achieve maximum artistic authenticity through squalor. 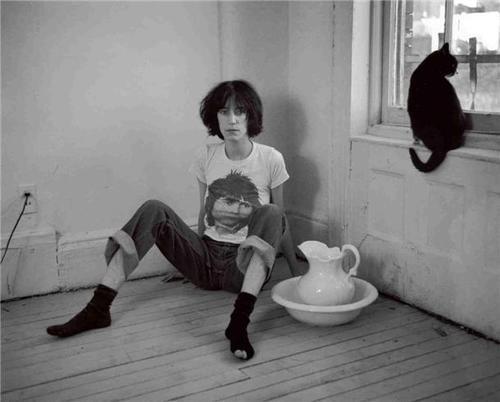 but yeah, the details around that bit of financial magic is something i would love to know. for a friend.

it’s an okay read – it wasn’t a drag or anything, but i never felt like i was being encouraged to enter into the story, and at a distance, you don’t feel the fire. it’s a couple of sweetly pretentious kids dreaming about art and being so, so earnest and self-conscious about looking the part, surrounded by the trappings of capital-a art. 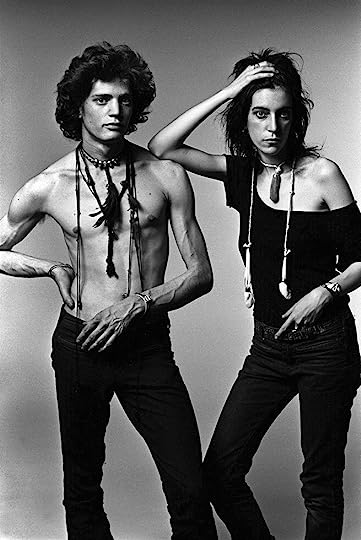 but it has its moments:

One evening in late November Robert came home a bit shaken. There were some etchings for sale at Brentano’s. Among them was a print pulled from an original plate from America: A Prophecy, watermarked with Blake’s monogram. He had taken it from its portfolio, sliding it down his pants leg. Robert was not one to steal; he hadn’t the nervous system for theft. He did it on impulse because of our mutual love of Blake. But toward the end of the day he lost courage. He imagined they were on to him and ducked into the bathroom, slid it out of his trousers, shredded it, and flushed it down the toilet.

I noticed his hands were shaking as he told me. It had been raining and droplets trickled down from his thick curls. He had on a white shirt, damp and sodden against his skin. Like Jean Genet, Robert was a terrible thief. Genet was caught and imprisoned for stealing rare volumes of Proust and rolls of silk from a shirt maker. Aesthetic thieves. I imagined his sense of horror and triumph as bits of Blake swirled into the sewers of New York City.

We looked down at our hands, each holding on to the other. We took a deep breath, accepting our complicity, not in theft, but in the destruction of a work of art.

“At least they’ll never get it,” he said.

“Anyone who isn’t us,” he answered.

there’s a great deal of struggle, but there’s just as much coincidence, timing, and right place right time at play. here’s some understatement: for ya:

I had no concept of what life at the Chelsea Hotel would be like when we checked in, but I soon realized it was a tremendous stroke of luck to wind up there.

i do like her description of the “shabby elegance” of the chelsea; everyone who has ever even walked by the place has written about it, but hers is memorable:

The Chelsea was like a doll’s house in the Twilight Zone, with a hundred rooms, each a small universe. I wandered the halls seeking its spirits, dead or alive. My adventures were mildly mischievous, tapping open a door slightly ajar and getting a glimpse of Virgil Thomson’s grand piano, or loitering before the nameplate of Arthur C. Clarke, hoping he might suddenly emerge. Occasionally I would bump into Gert Schiff, the German scholar, armed with volumes on Picasso, or Viva in Eau Sauvage. Everyone had something to offer and nobody appeared to have much money. Even the successful seemed to have just enough to live like extravagant bums.

three stars – fine but not the riveting tearjerking rock and roll experience everyone built it up to be.

and even though no one asked me, i hate deckle edges on paperbacks.

*what would rimbaud do?