unfortunately, as much as i love my secret santa for getting me a copy of this book, which was never published in the U.S. because life is unfair, and as much as i loved the two other books i have read set in this particular zombie world, Outpost and Juggernaut, this one was the weakest in the “series”—quotation marks because although the kind of zombies are the same, the books themselves are completely unconnected. i think. i haven’t read Terminus yet, and i read these so far apart i don’t recognize any overlap. but it is my understanding that the only thing that ties them together are the physical characteristics of the zombies, which involve metal spikes. because what is more awesome than a zombie? a METAL zombie. 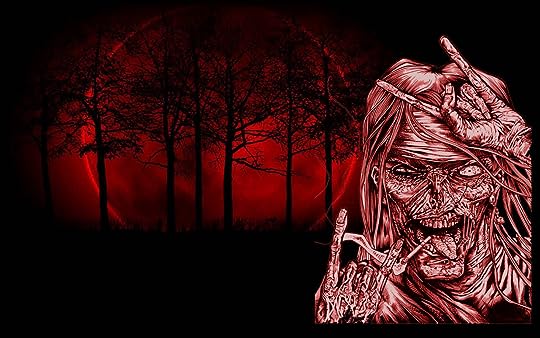 the premise of this one is fantastic—the zombie event has already had its way with the world and very little remains of human civilization, but we still got some bombs! and we got several soldiers who are tasked with dropping one of these bombs onto an abandoned compound in the middle of death valley. why, you ask? that is classified, friend, and soldiers, unlike review-readers, do not ask why, they just follow orders.

but although we still have nice shiny bombs, the planes have kind of gone to shit, and the plane carrying this bomb and these soldiers is not up to the task of being a plane, and it crashes, stranding the soldiers in death valley, which has become undeath valley on account of all the metal zombies and such. dude, SAND ZOMBIES!! METAL SAND ZOMBIES!! besides all the METAL SAND ZOMBIES, there’s also the regular-world difficulty of surviving in the middle of the desert with very few supplies, serious injuries sustained in the crash, and no real possibility of rescue. comms are down, and ain’t no one rushing into the zombie-desert to save a few people who are probably already on their way to becoming zombies, you know?

so, yes—survival story and zombie story all rolled into one—WHAT COULD BE BETTER? well, both of the other books i have read in this series, for starters. metal zombies are always awesome, but the other two books are like metallica and black sabbath metal zombies, and this is like…warrant metal zombie knocking at the door and saying “i’m cool, too!” but you’re not, warrant. you are derivative and dull.

i think you really have to like military fiction to enjoy this one. it’s full of lingo and weapon/plane detail and chain of command and all the abbreviations with which the military is so enamored, but the writing itself is really dry. like the desert. there’s some cool shit, for sure, and some really harrowing scenes, but it’s very light on characterization and heavy on specifics related to bomb-deployment and artillery and fuel and…rivets. it’s like the moby-dick of metal zombie novels, where you’re sure more cool stuff should be happening but the author just won’t stop describing what rope is and getting to the damn whale already.

this one just wasn’t my cuppa zombies, but other people liked it just fine. i’m thrilled i got a chance to read it—♥ santa ♥, and i completely pimp the other two at you, if you think metal zombies in the arctic or metal zombies in iraq sound awesome. and i will read Terminus soon to see if metal zombies in manhattan’s subway tunnels are awesome. prediction: they will be.

THANK YOU SO MUCH, GOODREADS SECRET SANTA!