History of Wolves by Emily Fridlund
My rating: 3/5 cats

sometimes a book will surprise you. usually, that statement is a one-way street: i didn’t think i would like_____(title) because i don’t usually like_____(genre/theme) or _____(noun), but BOY was i surprised!

but this time it’s the inverse—the cover, synopsis, and all the reviews i’ve read during the howevermany years i’ve had this book on my shelf have all been waving neon banners and chanting my name, promising me it was gonna be a verykaren book.

and then i read it and i was like ‘huh.’ not “huh?,” which would have been preferable, but ‘huh.’

i guess this is why no one ever asks me to be a judge on the booker panel.

actually, upon 43 seconds of reflection, maybe this is a “huh?” after all. because i do not understand the glowing praise and accolades.

it deserves praise for the prose—her writing is quite lovely, especially in the nature descriptions; it paints a strong atmosphere of isolation and loneliness and beauty against which our narrator linda comes of age.

but as far as character and story, it was moosh to me.

i don’t mind a little ambiguity in my fiction—i’m happy to do some of the work myself, as long as i’m given enough context clues to do so. but i struggled with linda as a character. whether or not i “like” a character is irrelevant, but i do need to understand them, and linda is so slippery and inconsistent, it’s hard to interpret her motivations.

she’s had an unusual upbringing; raised in a commune in the isolated backwoods of northern minnesota that turned sour and disbanded, leaving her behind in the care of a couple who may or may not be her birth parents. for the meat of this story, she’s fourteen years old, poorly supervised and lonely, and her low social intelligence, coupled with the unkindness of teenagers and their bullying, makes it difficult for her to make friends. she fumbles throughout the book to establish connections; prone to grand gestures and inappropriate sexual advances, always retreating to the safety of solitude.

when a young mother named patra and her four-year-old son paul move in to the house across the lake, linda ingratiates herself into the family, a babysitter to paul, a friend to patra to help keep her loneliness at bay while she awaits the arrival of her professor husband. linda’s relationship with patra becomes obsessive/possessive; nearly predatory, but she (mostly) seems to enjoy paul’s company. patra is a bit flighty and fragile, and when her husband eventually arrives on the scene, things start to go downhill quickly, culminating in paul’s death, which readers have known about since the second page, waiting only to hear the ‘how’ of it, and what linda’s role was in the situation.

even with the benefit of first-person narration, linda’s personality remains opaque and walled-off, and her actions are frequently inconsistent. she’s hard to pin down or predict, which is really frustrating for a reader.

as for the story, there are several prominent events and conflicts, but many of them are treated shallowly, and despite there being a number of narrative threads that loop and recur, they don’t necessarily cohere, and they just end up…dangling. there’s child abuse and neglect, teen pregnancy, pedophilia, christian scientists, the commune, the events of the trial—puzzle pieces that seem like they should at some point interlock, but never quite come together.

linda’s memories from her early childhood in the commune are only briefly surfaced, and much more could have been done with that to explain linda as a character. she’s such a blank hole, psychologically, and since this is primarily a character study, in first freaking person, that’s maddening.

the story is told from adult-linda’s perspective at thirty-seven, and the decisions she makes in her adult life are just as perplexing as those during her formative years. i suppose we’re meant to infer that she’s still paralyzed; emotionally stunted from the psychological trauma of paul’s death, or that it’s some kind of guilty self-punishment to avoid personal attachments, but linda was an odd little duck even before she met patra and paul; demonstrating creepy stalkery behaviors towards one of her classmates and trusting her teacher more after he was arrested for child pornography and inappropriate sexual conduct with the object of linda’s creepy stalking.

the main takeaway is a haunting and pretty bleak emotional mosaic of events in the life of someone who was only ever on the fringes of the human experience; who can’t seem to decide whether she wants to belong or not. she states, I remembered children from the playground where I’d watched them when I was growing up. Plus, I’d read some books with children in them., which is inexpressibly pitiable, but, when selected to give a presentation for a history odyssey tournament, she chooses wolves as her topic and, when asked by one of the judges, “What do wolves have to do with human history?” replies “Wolves have nothing at all to do with humans, actually. If they can help it, they avoid them.” it’s hard to tell what linda wants—she makes timid advances into human connection and when she isn’t rebuffed, she self-sabotages and is alone again. there’s no sense of character growth and too many empty spaces to fill in.

to me, the novel as a whole was messy and underdeveloped, despite some beautiful writing. i didn’t hate it, but i can’t say i enjoyed it much, either, although i loved the surprise lurking under the dust jacket: 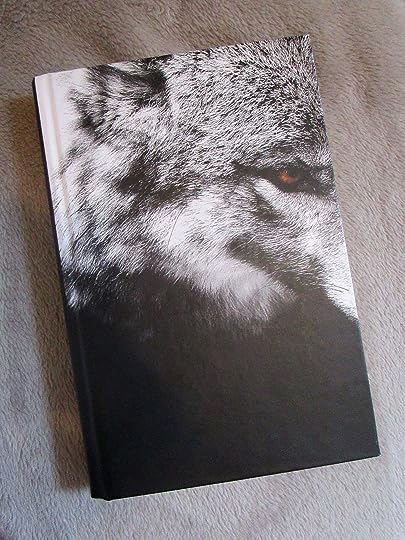 i give it three, but it is a low three, and i am sad i didn’t love it.