hahaha kelly’s review for this cracks me up.

and i totally agree with the fact that sometimes when something is over, you just have to let it be over. make a clean break. but i am, in many ways, a completist. i have seen all the movies in the saw franchise, i keep getting wicked excited every time i see there is a new newsflesh short story available, just when i thought i would never get to revisit that world, and i will read any and all retellings of wuthering heights, no matter how dreadful.

so i get the impulse that leads to the perpetuation of a series, even when it might not be “necessary” in terms of addressing unanswered questions or filling in any timelines. because this one isn’t, really, except for giving fourgasms to the fangirls:

i thought it was interesting when roth made the move in Allegiant from tris-centric narration to a tris-and-four split-narrative. it was intriguing to get another perspective to the events, and to gain insight into four’s mind, rather than just seeing all of his actions through tris’ eyes. and, well, obviously there was more of a structural need to give him a voice in that third book. this collection reads like a bunch of “what-if” writing exercises. what if we’d had four’s voice all along? what if this scene had been seen through his eyes in Divergent? what if we knew his motivations from the very beginning? these stories end up being fun without being particularly illuminating. we get more reasons to hate eric and marcus, we get a little more texture to four’s relationship with evelyn, and we get a little more uriah ♥. 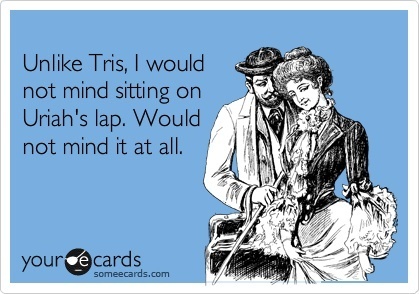 but honestly, part of what made four compelling as a character was his secrecy. he was enigmatic, troubled, hard to predict. his POV in Allegiant was compelling for the novelty of it, but it took some of his power away as a character, because his weaknesses were more exposed. sure, it was humanizing, but sometimes it’s better not to know all the dopey-moony things your tall dark and handsome is thinking, yeah?

but, overall i enjoyed it—i did like the details and the dovetailing it did with the things that were already known to readers, and in the bound (non-digital) edition, there are an additional three scenes after the four four novellas, which is even MOAR FOUR for your buck.

thanks to greg for buying me a book about FOUR!!!