this book is shockingly good, and it wasn’t at all what i’d expected.

see, i thought this was going to be folk horror, for the following reasons:

1) it’s compared to shirley jackson’s The Lottery
2) the cover’s got people dressed in gender-matched* outfits surrounding a pyre: 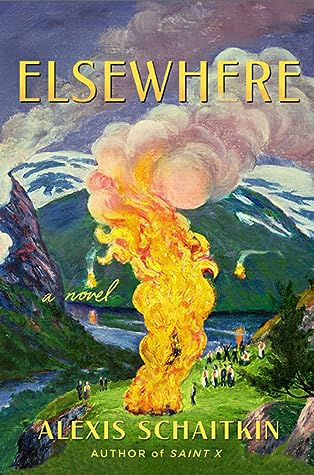 3) the synopsis establishes that the story is set in a small, isolated rural town whose residents live under the shadow of an “affliction,” which periodically causes some mothers to slip away, vanishing into thin air.

and 4) the cute little letter slipped into my ARC fairly drips with a folk-horror tone: 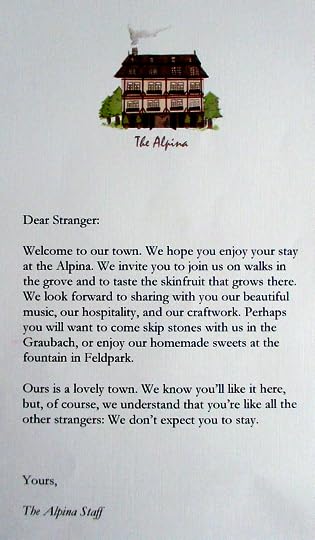 it both is and isn’t folk horror. let’s get one thing outta the way: i’m not a huge fan of folk horror, in any medium. i find it kind of a drag; it’s too stylized and formulaic; always some slow unfolding story set in a closed-off, tradition-fixated population where everyone’s a little “off,” and the visiting outsider eventually discovers whatever ancient magickal curse makes these people tick, usually as they are being ritualistically sacrificed. yawn.

Elsewhere definitely has elements of folk horror to it—all goats and sexual bloodletting, the insularity of a self-sufficient town where no one ever leaves, where anything beyond the borders is simply called “elsewhere,” where townsfolk treat the few outsiders who do visit with a mix of fascination, reservation, pity, and condescension, living their small pleasant lives quietly resigned to the fact that some of their mothers might just poof out unexpectedly, and life just goes on, children pairing off, girls growing older, getting married, giving birth, maybe disappearing themselves.

and it does have a secret kernel to it, which makes it hard to review without spoilerz, but i will say that this book is way more than horror, folk or otherwise—it’s an insightful, emotionally resonant and richly themed meditation on the whole experience of motherhood through the eyes of vera, whose mother went when she was a girl, who becomes a mother at the risk of doing the same to her own daughter, and the magical realism elements are just the delivery mechanism for a very literary take on maternal love and loss and sacrifice summed up perfectly by this line:

You do not get to keep what is sweetest to you; you only get to remember it from the vantage point of having lost it.

because the appreciation of this slim novel lies in the reader discovering it for themselves, i will tread lightly and focus on only two of its five parts (by which i mean “plop out a lot of passages i loved that don’t give anything away”)—the first, when vera is a child, and a stranger named ruth visits them, and the second, after vera has married a man named peter and given birth to a daughter named iris.

one of the most notable events of vera’s childhood is ruth’s arrival to the town. strangers are so uncommon in their community that her presence creates a stir amongst the townsfolk:

That night as we ladled stew into bowls, brushed the tiny pearl teeth of children, walked dogs down damp streets, we felt the stranger’s presence; it seemed we did these things for her, as if, while our town’s population had increased by a single person, we had also doubled, become both ourselves and the sight of ourselves, now that we had a stranger to see us.

the residents can always feel when a mother has gone, at which point they will cluster in front of her home, where all photographs of the departed will be removed and ritualistically burned, and the mother’s possessions will be divided amongst the remaining women. ruth, witnessing the aftermath of a mother’s going, cannot understand their placidity in the face of what she finds shocking.

She could only see the horror of it. She couldn’t see what we saw: Something happened here that happened no place else. We didn’t know why it happened, or how. We didn’t demand answers from it because our affliction itself had taught us that you cannot wrest answers from a mystery. We submitted to it. We bore it, carried it, so that there would be a place on this earth where people lived as we did and knew the things we knew. We did this not only for ourselves but also for them, for her, even if she could not appreciate it. We were necessary.

people, even mothers, die from natural causes in the town, but the phenomenon of mothers vanishing is different, sacrosanct. the physical body is gone, and there’s no pattern to who goes and who is spared, although the women try to determine after the fact if there were any signs—whether a mother loved their child too much or too little, what determining factors they might have missed, always wondering if they will be the next to go, but powerless to predict or avoid it.

A girl became a mother who stayed or a mother who went, an outcome that surprised us, or didn’t. Impossible to predict, what motherhood would bring out of a woman, what it would show her about herself, the end to which it would carry her.

what an outsider cannot understand is that theirs is a glad burden more than a resignation or acceptance, and vera, although captivated by ruth—by the novelty of a stranger—knows she can never truly assimilate into their world.

She couldn’t comprehend that a mother’s going belonged to all of us, or that loss was the smallest part of it, because in losing her, we received everything else. Our affliction opened us to pain, yes, but also to heights of beauty, and of love, that people elsewhere would never know because they did not know what it was to love in the shadow of our affliction, our love deepened and made wild by the threat that hovered over it. Our affliction was terrible, but it was not as terrible as living without it.

their only real contact with elsewhere is mr. phillips, a necessary outsider who brings them supplies four times a year, and even he struggles to accept their attitude towards their affliction:

…he knew that the mother had not died, but he could not grasp what had happened to her instead, nor find any way to feel about it except this simple sadness and a wishing against it, no different than if the mother had caught a fever or fallen from a great height. He couldn’t access what it meant to us, and if he couldn’t, it was unreasonable to expect Ruth, who had known us only weeks, to grasp it even half as well.

the theme of an outsider unable to access an insular community is later echoed in vera’s relationship to her daughter; a specific combination of adoration and resentment inherent between mothers and daughters that she understood before she became a mother herself:

A mother was a chance to hate someone as much as you loved them, caring and wounding, a push and pull that only tightened the knot that bound you. While I envied the other girls their mothers, it felt right to me that I didn’t have mine. Difficult, but comforting, the way I suppose one’s life always feels.

and became even more relevant when she had iris; whenever peter tried to intervene in their squabbles:

He didn’t understand that a mother and daughter cannot be protected from one another, that the harms that pass between them cannot be mitigated because they are also expressions of love.

although theirs is a happy family, and peter loves iris unreservedly, the mother-daughter bond is a different, exclusionary beast; a powerful, all-encompassing, desperate, and fierce relationship, all the more fraught for its ephemerality. when iris is stung by a bee:

Peter tried to gather her in his arms, but she broke free of him and ran sobbing across the yard and up the porch steps to me. She climbed into my lap and I told her soon, soon, the pain would fade. I looked across the yard at Peter. I could see the hurt in his eyes, and I wanted to wish that Iris had let him soothe her, but I couldn’t make myself wish it. I wanted to wish she were not in pain, but I couldn’t do that either, because the pleasure of soothing it went so deep.

I thought that I should want what Peter and Iris had, a simpler, less turbulent love, parent and child instead of the two-bodied creature Iris and I became together. But I could not make myself want it. I couldn’t get enough of our push and pull, the spell we cast upon each other, our love like a secret chamber we shared, and always, no matter where we were or what we were doing, we were also in that chamber together. I loved to love her this way, even as I worried that this love might not be what a child needs, that it might also be a kind of harm.

this review is a mess because the book rocked me with its beautifully rendered exploration of the minefield of maternal love and my profound feels are impeding my ability to make words work, but trust me, it’s a swooner of a book and the best folk horror not folk horror story i’ve read.

*happy pride month! for our purposes here (and ONLY here, in discussing the visual narrative of the book cover), let’s pretend gender is binary.