Eat Your Heart Out by Dayna Ingram
My rating: 4/5 cats

when i am promised “a lesbian zombie novel,” i kind of expect that the zombies are going to be lesbians, with all the emotional and physical difficulties such a relationship would entail, and some “we’re here, we’re queer, we’re gonna eat your children.” lesbian werewolves were, after all, lesbian werewolves… 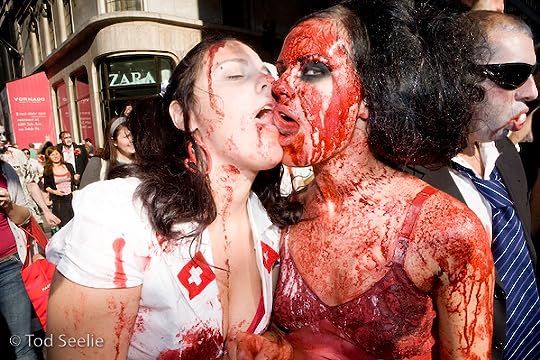 but this is a novel, in fact, about zombies, in which there are some lesbian characters. so if you are planning on reading some hot girl-zombie on girl-zombie action, this is probably not the book for you. and it’s not erotica, either, so you cheap thrills-seekers, go elsewhere. the sexy bits in this book frequently go awry, and are more likely to leave you laughing than revved up.

this is just a whizz-bang of a book. it is a fun zombie romp with characters that you would actually want to see in a zombie-filled situation: one has badass training in zombie-evasion from her film career, and one is just regular-people-tough and sweet and loyal and well-meaning, but isn’t going to freak out if a zombie heads her way, thanks to video games.

good action sequences, good and charming characters, still pretty confused about the zombie mythology in this one, but no matter, because the pacing of the story is enough to hold the reader’s attention, and it’s not as though, were this a real occurrence, there would be simple and straightforward explanations about what the fuck was going on, so i am okay with a little zombie-origin-story vagueness.

definitely worth a read for its action sequences and humor. she should write more, please.