Don’t Get Caught by Kurt Dinan
My rating: 5/5 cats

to celebrate the release date, the author sent me a finished copy with one of the best inscriptions ever: 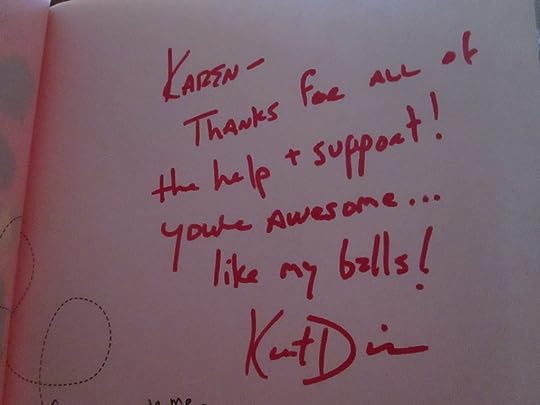 it’s been a long time since a gentleman compared me to his genitals. well, compared me favorably at least. buy this book TODAY.

this book is just so much fun.

full disclosure – an author friend of mine asked me to read this because he is himself friends with the author of this book. and i’m all overwhelmed here because i have been way too greedy with netgalley and accepting offered books but i said “okay, at least it looks like a quick read.” and it was. but mostly because i just couldn’t put it down. i started it on the train going home to help my dad move and i was pretty close to finishing it by the end of the ride and i was like “nooooooo – i need to finish it NOW!” i was willing to ride in an uncomfortable train seat for many more miles just to finish this book, which is a pretty strong recommendation.

i love heists. and super-involved pranks. and the fact that this comes out on april fools’ day.

are we still having those hand-wringing sessions where we fret that boys aren’t reading? because if we are, this book is the perfect solution for that problem.

i mean, yeah, we have john green, but let’s be honest – the boys who are reading john green would be reading something else if john green didn’t exist.

and we have the books that are specifically targeting reluctant young male readers, full of sports and trucks and essplosions, but they’re not really great literature so much as brain candy to trick boys who’d rather be setting things on fire or throwing balls around into sitting still for a couple of hours.

but this is the happy medium – it’s fast-paced and full of mischief, puke and cussin’, but it’s also not just literary junk food. there’s definite appeal for both male and female, adult and teen readers alike. it’s irresistibly charming and goodhearted without being goody-goody. you would totally be proud if this book was your kid.

it’s described on the back cover as Ocean’s 11 meets The Breakfast Club and i can’t think of a better summary. it’s about five high school students who attend a school in which the chaos club has been a long-running and secretive presence, traditionally performing a series of highly visible pranks throughout the school year to the delight of students and the (mostly) tolerant indulgence of the staff. no one has ever identified its members as the torch has been passed down year after year in an impressive legacy.

one night, max and four other students find themselves victims of a chaos club prank and they decide to band together and fight back and beat the club at its own game. the parallels to the cast of the breakfast club are pretty clear – a bunch of misfit kids who would never gravitate towards each other without a very specific situation throwing them together who nonetheless discover that their differences complement each other and that together, they can accomplish the most spectacular things.

using the breakfast club designations to match the characters:

ellie is the princess

wheeler is the criminal

i guess malone is the ally sheedy “basket case” character, but she’s updated to have her “other” status defined by a sexting scandal in which the entire school has seen her boobs.

and max is the anthony michael hall “brain,” but more than that, he’s the nonentity. i am going to boldly quote a longish passage in which his position in the high school hierarchy is made vividly apparent because i think it is perfectly written.

during a debate in their philosophy class concerning the question: Is every life valuable?, which is handled with the sensitivity and respect you’d expect from a class of teenagers, the following point is made by a dreadful girl named tami:

“Look, some people just aren’t as important as others. Not everyone can be somebody. There have to be nobodies too. I’m not being mean. It’s just statistics.”

In the commotion that ensued, Tami decided to raise her position on the Bitch Power Rankings by saying, “Look, I don’t mean nobody in a bad sense. Nobodies can be good people. They’re just not very important. Like Dan over there. He’s nice and people like him, but he’s not special or anything.”

I looked up from my notebook, wondering just who Tami was talking about because there isn’t any Dan in our class.

Then I saw where she was pointing.

And everyone was looking my way too.

This is my life.

Tami did a perfectly executed whatever shrug that made my face burn.

“We’ve been in classes together since kindergarten,” I said.

Tami huffed and said, “Well, that just sort of proves my point, doesn’t it? And don’t get so defensive. I’m not saying you’re a bad person. You’re just kind of there. You’re just Max, and there’s nothing wrong with that.”

determined to shed his just-max status and become not-max, and embracing the Write your name in the wet cement of the universe motto of their philosophy teacher watson, the five students, each with their own motivating factors, embark on their series of pranks, contributing and participating in the planning and the commission according to their individual strengths.

naturally, things get out of hand and max realizes

… this is what happens when you try to write your name in the wet cement of the universe. It hardens, trapping you in place, then begins downpouring shit on you.

it’s so much fun, but it’s not mindless fun. there are lessons aplenty about personal values and ethics, the difference between revenge and justice, the importance of remaining true to one’s own code despite the appeal of being part of a group, and the ever-important heist rule #4 – be suspicious.

there are lots of fun little easter eggs – you might see some familiar names of authors scattered throughout, including john mantooth, who set me up with this book in the first place, and paul tremblay, who immortalized ME in his own novel. there’s also a fun flip-book feature along the bottom of the pages involving cows. i love love love the mission-specific nicknames the members are given for each prank, the frequent references to awesome heist movies, and duhh – the many dick-jokes.

it ends, not on a cliffhanger, but in a perfect place to lead into a follow-up book, so i say sequel please!!