if you’re reading this review, you’ve probably already read the book’s synopsis, so you know the basics: that the titular rose gold spent eighteen years of her life suffering from chronic but vague ailments: headaches, fainting and dizziness, nausea, fatigue. too frail and sickly to go to school, she spent most of her time in hospitals undergoing tests and surgeries; becoming gaunt and exhausted, hair falling out, teeth rotted through, wheelchair-bound, and no closer to a diagnosis—told her symptoms were the result of everything from allergies to a chromosomal defect. of course, what’s really been going on has all been her mother patty’s doing; poisoning rose gold in a munchausen by proxy situation like she’s in some SVU episode, where it’s common enough to build a drinking game around. and in fact, like the l&o franchise, this story is ripped from the headlines, inspired by the gypsy rose & dee dee blanchard case, but with enough differences that you won’t be spoiled on how this novel plays out.

rose gold’s testimony sends patty to the slammer for five years, and upon her release, patty moves in with rose gold and her infant son, an arrangement that NO ONE thinks is a good idea, but suits the two women just fine. they’ve been waiting for their reunion for a long time, after all.

Patty insists all she wants is to reconcile their differences. She says she has forgiven Rose Gold for turning her in and testifying against her. But Rose Gold knows her mother—Patty Watts always settles a score.

Unfortunately for Patty, Rose Gold is no longer her weak little darling…And she has waited such a long time for her mother to come home.

what we have here is a duel between two unreliable narrators; suspicious of each other and simmering in long-held grievances. each has their own agendas, delusions, and specific traumas which maybe sharpen, or maybe cloud their judgment in this psychological standoff, but will certainly affect ev-er-y-thing from what they think to what they want the other to think they’re thinking, from how they present themselves to how they interpret the actions of the other, not knowing what is an act and what is the truth, getting wound up in an intricate web of strategy and paranoia and taking the reader with them. from the readers’ standpoint, this is basically the voltron of unreliability; the seven-layer-parfait of unreliability with a dollop of subjectivity on top, or a simile of your own choosing.

but it is, most certainly, a duckrabbit. 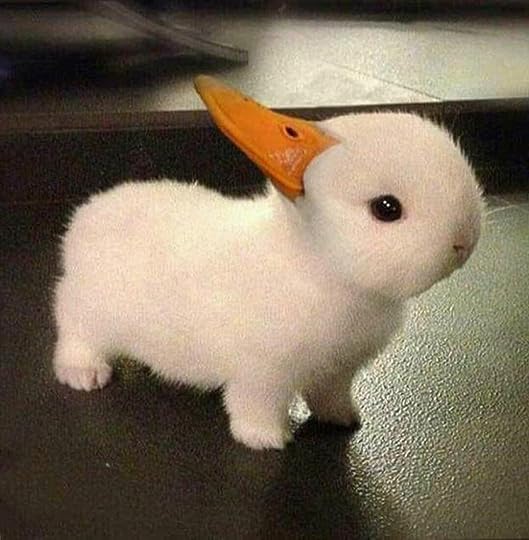 is this a gripping popcorn-pageturner that takes mother-daughter conflict to all-new levels of emotional manipulation with unparalleled cat-and-mouse suspense and ther’re high-fives all around as everything burns?

Most people don’t like holding on to anger. They feel it crushing and consuming them, so they let it go. They try to forget the ways they’ve been wronged.

But some of us cannot forget and will never forget. We keep our axes sharp, ready to grind. We hold pleas for mercy between our teeth like jawbreakers.

They say a grudge is a heavy thing to carry.

or is it a much sadder story about two damaged people ripping off each others’ scabs? avoiding self-reflection by lashing out? both women are alone in the world, victims of trauma, made sympathetic by how desperate they are for the comforts of family, love, and a sense of belonging with no idea how to achieve that stability. there are some moments here where the heart is stabbed all the way through with feels.

so, you can be sad about this book or you can be wickedly entertained or you can have yourself a platypus—i’m not in charge of any of this.