why have i never read this book before?? 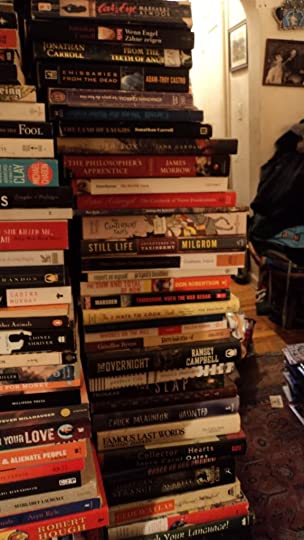 do you see how it is wedged into a teetering, lode-bearing stack of books?? 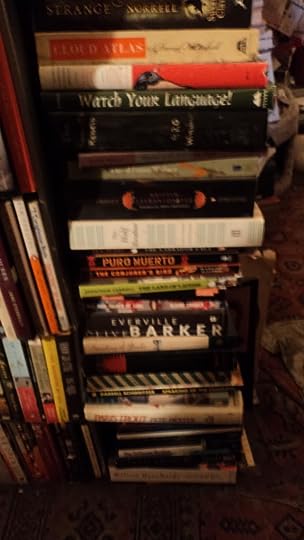 removing it was a tricky business, indeed, but i succeeded, and i am finally reading it. so thank you for badgering me about it, internet, because so far, i am really enjoying it!!!

the other day, when i was still a whopping 60 pages from finishing this book, greg shoved me out from in front of my work-computer to revisit his review of the book. he muttered aloud “why does anyone even read my reviews? karen, don’t ever let me compare a book to a möbius strip again.”

and he is both correct and incorrect. because it is a good review, but the book ain’t nothing like a möbius strip.

finnegan’s wake is a true möbius. infinite jest is a motheaten möbius, with key scenes lost along the way. this is more of a parabola, or the first hill in a rolly coaster. if the rolly-coaster ride-as descriptor weren’t so trite, i would explore that here: how at first, you didn’t quite know what you were getting into, as you made your ascent, but then, once you got to the top and could see what was coming, you just couldn’t read through it quickly enough, and there was excitement and screams and probably some of the weaker readers vomited into their laps. but it is indeed trite, so i won’t make the comparison at all.

i can understand the accusations of gimmickry, and if this was just structure without substance, i would completely agree with mitchell’s detractors. if it were just a series of short stories, butterflied and stacked on top of each other to form a book, it would be less appealing than it is in reality.

because they do bounce off of each other, the stories. they sneak into each others’ worlds both thematically and more overtly, like foraging mice on little mouse-missions. sometimes they are each others’ stories. calvino, borges, arabian nights, david lynch – i can trot out all the expected names if you aren’t tired of reading them. but this is something all its own. and i am sure that a second reading would do me a world of good at identifying even more of these echoes. this is a book that pretty much demands a second pass, which i will gladly give it.

mitchell addresses the accusations of gimmickry before they are even made, in the novel itself:

Spent the fortnight gone in the music room, reworking my year’s fragments into a “sextet for overlapping soloists:” piano, clarinet, ‘cello, flute, oboe, and violin, each in its own language of key, scale, and color. In the first set, each solo is interrupted by its successor: in the second, each interruption is recontinued, in order. Revolutionary or gimmicky? Shan’t know until it’s finished, and by then it’ll be too late.

and i love that – his anticipation of his own critics. yummy.

so – yeah – absolutely read this book if you have been dragging your feet over it. but beware – some of the stories are going to be much more captivating than others. i would read an entire book about frobisher, for example.

People are obscenities. Would rather be music than be a mass of tubes squeezing semisolids around itself for a few decades before becoming so dribblesome it’ll no longer function.

i will definitely read this book again.