City of Savages by Lee Kelly
My rating: 3/5 cats

maggie has added her own review at the end

i expect different things from adult novels than i do from YA novels. that is a statement made for clarity, not apology. to me, it’s just common sense to judge a book based on how well it serves its intended audience. it would be silly to dismiss Charlotte’s Web on the grounds that “pigs can’t talk – this is childish nonsense!!” and when it comes to YA, i am willing to sacrifice background detail and plausibility in favor of solid action sequences, interesting characters, and a story that is engaging and entertaining.

naturally, there is crossover on both sides – there’s plenty of adult fiction that is propulsive without getting weighed down by explanation and exposition, and there’s YA that is more languid and thoughtful. but for the most part, YA fiction needs to capture the reader’s attention quickly and sustain it throughout the book, which means there aren’t many successful YA novels with four-page descriptions of nature or architecture – the allure of YA is that it moves. and it doesn’t even need to be logical. Divergent has a premise that makes very little sense, but it’s a damn fun book. you get so caught up in its “things are like this” attitude and its super-fun momentum that it would be kind of party-pooping to pick it apart and point out its (numerous) implausibilities.

there seems to be some confusion about whether it is YA or not. i have seen this book shelved, in physical stores and here on goodreads, as both adult and YA. the kirkus review lists it as being for ages 14-18, and VOYA, which is an organization that is YA-specific, reviewed it, saying: This is one of the best and most original dystopian stories available for teens today and an absolute must-have for any library serving teen readers. BUT. it is priced as an adult book, so that’s how i figure it wants to be classified. and as an adult book, it doesn’t serve its audience well. if your list price is 26 bucks, you better bring it. it’s a really “fun” read; it’s fast-paced with an interesting premise, and since i live here in new york, it is a nice added layer to be treated to descriptions of these very familiar locations so transformed. but it’s very uncomplicated – the characters lack psychological depth, the big reveals are not surprising to a decent close reader, and there are many instances of the structure of this world and the behavior of characters that would be acceptable in a YA novel, but since i am forced to critique this as an adult title, they stretch credulity.

as a YA book, this would get a 4 star cat rating from me, because it has action and energy and it was genuinely fun to read. but it definitely suffers in comparison to similarly-themed titles intended for an adult audience – this lacks density and i don’t see the average reader of adult dystopias being satisfied by it.

in my head, this reads like a YA novel, no question. the story is focused on the teenaged characters, and the tone and elided details/necessary suspension of disbelief are completely appropriate for a YA novel. and if you want to think of it as a YA novel, be my guest, and it will probably be an enjoyable reading experience for you, because the story is indeed exciting. but i’m not a millionaire, and i feel like this should have been emphatically published as a YA novel with a YA price point. this is just me looking out – i have an ARC, so it was all free for me, but price is an important factor for a lot of people, so i figured it needed to be said. support your local library!

i would love to read a more “adult” companion book to this one, since to me the more interesting character dynamic is between their mother and rolladin, and they would be the more likely focus in a novel aimed at adults. i would definitely read more from this author, i’m just saying i wish this had been more honestly designated as YA, because i probably would have enjoyed it even more.

i probably could have finished this book sooner, but this happened: 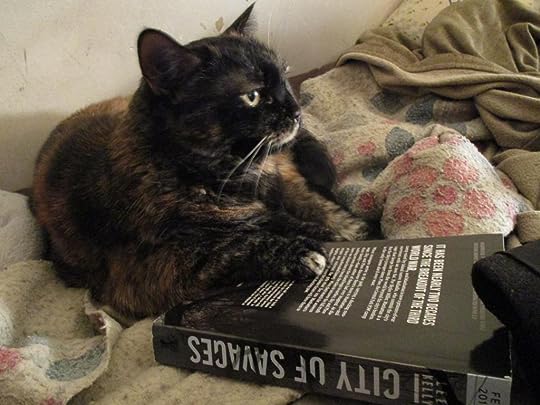 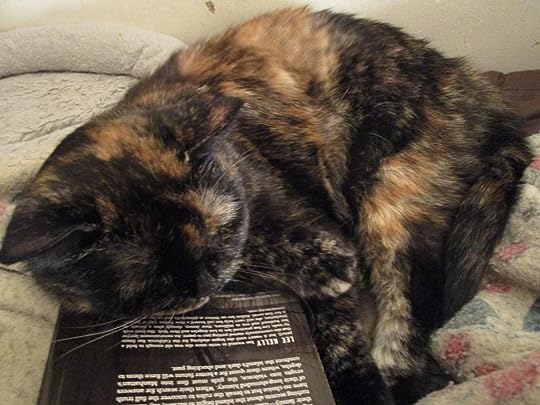 so i had to wait. and yes – that powder blue thing behind her is indeed a cat bed. but she would rather fall asleep on the book i’m reading instead of her bed or ANY OTHER BOOK IN THE HOUSE. because she is spiteful.

THIS BOOK WAS GOOD BECAUSE ALL THE SQUIRRELS IN IT GOT EATEN BY THE PEOPLES SO I COULD RELATE TO IT BUT IT WOULD HAVE BEEN BETTER IF THE PEOPLES WERE CATS INSTEAD. MORE CATS NEXT TIME.