Everybody is somebody’s bully

i liked so very many things about this book

1) that first chapter. jesus, what a stunner. probably the best opening chapter i have read since This is Not a Test

4) the secret behind the allure of the east staircase.

however, there were some missteps.

i’ll save my complaints for the end, because overall, i thought this was fantastic, and a really strong debut.

it takes place at st. michael’s – a private catholic high school in pittsburgh in the early nineties. the school has fallen on hard times – the parish church has burned down, and since then, the gym has been designated as a temporary chapel, which means students can only let off all that adolescent physical energy when the weather is nice and gym can be held outside. funding to rebuild the church has been slow to come, and there has been some financial impropriety by father mercedes, which contributes to the overall decline. the school itself is falling apart – the roof is leaking, enrollment is down, and the morale of teachers and students alike is plummeting. father mercedes sees the closing of the school as his only chance to rebuild the church, and is secretly looking for any reason to do so.

into this environment walk three first-year students: the likably naive peter davidek, noah stein with his mysteriously scarred face and survivor’s “take no shit” attitude, and lorelei paskal – trying to learn from the mistakes she made at her old school and just wanting everyone to like her this time around, complete with a checklist for her behavior.

some of the secondary characters are worth mentioning here, because they are so perfectly-rendered in their different ways: audra, green, lerose, and the aforementioned hannah ♥.

st michael’s has a long tradition of sanctioning bullying in the form of a hazing initiation. the school condones this behavior, because they feel hazing eventually leads to peer bonding, and it is believed that this harmless ritual will lead to the seniors feeling protective of their personal freshman targets. many of the pranks are in fact harmless – making the freshman act like dogs, or stealing the girls’ make-up, but the decline in morale at the school, and the desperate loosening of standards for enrollment has lent to a more aggressive tone to these hazing practices. traditionally, the year-long hazing culminates in one final grand event – the annual picnic, during which the most sensational hazing occurs. among the freshman class, rumors spread and fear pervades.

Anxiety had taken over the newcomers. Everyone knew about the hazing, but no one was sure what to do about it, or how bad it would get.

as one student predicts:

“All seniors got their asses decapitated when they were freshmen, and it boils in them for years. Now they’re gonna give it back“

the seniors see hazing as “our turn,” and that justified payback is a right:

What kind of legacy would their oppressed senior class leave if nobody did and goddamned initiating?

stein is the only student who refuses to be manipulated or provoked into participating in the hazing. he is quick to defend himself and others, either verbally or physically, and eventually, he is left alone because he’s seen to be more trouble than he is worth to antagonize.

stein has his own code of behavior and self-protection

“I’m not saying not to fight back,” Stein whispered. “I’m saying when they kick you, thank God because they just gave you a license to kick their asses back, and kicking asses is fun!” He flipped through the pages of a notebook. “This is your school, Davidek. Your life, your place in the world – a bunch of blank pages. You got to fill it up with what you want. So they say, ‘Do all this homework, you’re in suspension.’ But what do I do?” He slid the notebook across the table, and Davidek looked at the pages Stein had been scribbling in all morning. It was a collection of crude cartoons – Bromine eating a plate of turds, Bromine having sexual intercourse with a giraffe, Bromine snipping off Mankowski’s penis with a pair of scissors. “Your problem,” Stein told him, “is you don’t know how to be happy with your unhappiness.”

and he offers up a lot of wisdom to davidek throughout the book:

davidek and stein form a fast bond, after the events in that stunning opener, which take place during their orientation and involve a victim of hazing who has been pushed too far. their participation in what follows both cements their friendship and makes them an enemy in ms. bromine, the brittle and vindictive guidance counselor. the two boys will also form a wobbly and complicated love triangle with lorelei, with unexpected results.

the book is described as “Fight Club meets The Breakfast Club,” which is fine and sound-bitey, but the closing lines of the flap-copy: A coming-of-age tale reversed, Brutal Youth follows these students as they discover that instead of growing older and wiser, going bad may be the only way to survive, is a little misleading. it’s true that bad things happen. many, many bad things. but they aren’t the result of these characters “going bad.” for the most part, stein and davidek try to do the right thing, and lorelei just gets caught up in her impossible goal of pleasing everyone and makes some decisions based on that weakness that have consequences. this isn’t a story about some kids sick of being bullied and fighting back, as the synopsis implies – it is more about the way different people respond to a climate of bullying: submitting, resisting, or finding a way to adapt.

the multiplicity of perspectives gives a truly well-rounded sense of the different character’s motivations. we get to see interactions and situations from different angles, and can only watch helplessly as misunderstandings occur and we witness how close so many events came to working out okay, but then did not, because of one unfortunate decision. it’s a tricky kind of writing to pull off, and he does it several times here with great success. lorelei’s toxic and loveless home life, stein’s secret, hannah’s vengeance plot, the unfairness these kids face every day – everything accumulates and festers and will contribute to how things spin out of control.

the reader’s awareness of these motivations makes us a little more sympathetic to some of the inexcusable acts, but despite this understanding, i thought this book was incredibly ballsy to refrain from giving a happy ending to all the characters. this book is very honest when it comes to forgiveness – some acts are inexcusable, and not everyone can be redeemed or rescued.

i’m kind of surprised that this keep being listed on goodreads as YA. it isn’t being marketed as YA, it isn’t priced as YA, it’s in the adult section at BN… i know that most of the characters are teenagers, and i can see that there might be crossover appeal, with the us-against-them attitude so clearly demarcated between the kids and the adults; the division between the powerless and the powerful, but this doesn’t read like YA at all to me. it takes place in a pre-internet world and so doesn’t address the modern iterations of bullying that occur in the digital age, so while the bullying themes are still completely relevant, it’s almost a little less vicious because it’s so personal. you don’t get the same free-for-all aspect you get with cyberbullying, and it’s almost quaint when you can put a face to your enemy.

so, on to the things i thought were weakest. the adults here are almost hypercolor-bad, cartoonishly inept or cruel – parents, administrators. teachers. he does try to account for the pretty much across-the-board adult cruelty with hannah’s explanation of the trickle-down effects of disappointment/violence/abuse:

“You’re sweet, Peter, but do you understand why everyone at this school is so fucking miserable?”

He shrugged. “Tough times, I guess…”

“Tough times,” she repeated. “Actually, it’s because the church is putting pressure on Father Mercedes, he’s kicking Sister Maria’s ass, she’s beating up on the teachers, and the teachers are coming down as hard as they can on the students, who are shoving it back on each other. Everybody’s pissed off and wants to fucking hit somebody, but this whole system has only one rule: You can’t hurt anyone who can hurt you back. So Sister Maria can’t clock Father Mercedes, the teachers can’t tell Sister Maria to fuck off, and the students can’t punch out the teachers. They have to take it out on someone else. That’s you and me. We’re at the bottom of the pyramid.”

but this sort of knee-jerk cruelty by ms. bromine, mankowski, etc. seems too exaggerated. in a book that was more satirical it would fit, but it seems unrealistic here, and nearly camp. there are exceptions, of course – sister maria and zimmer are well-intentioned, although effectively neutered, but i think this is what makes it feel the closest to YA – the us vs them dichotomy – the kids are also cruel, but there is an unmet expectation that adults should be protectors and the fact that they’re not is reminiscent of those typical teen-movies from the 80’s, where parents are distracted, absent or clueless: 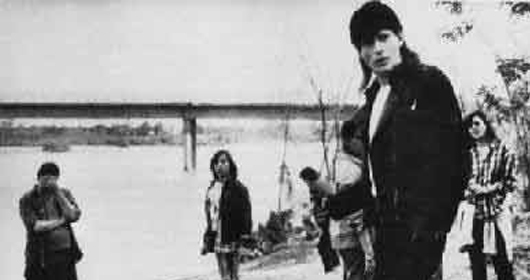 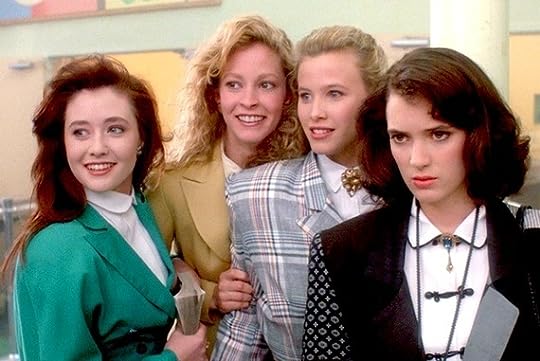 and hannah’s defiant scrawl you couldn’t remember me if you tried also feels very john hughes-ish, and would scan very well into this particular teen-anthem

so while i found that to be a little too relentlessly black-and-white, this book is incredibly addictive. he has a great energy, the story just flies by, and i am very eager to see what comes next from him.