Appropriate and Other Plays by Branden Jacobs-Jenkins
My rating: 4/5 cats

i don’t really read plays. i only read this because challenge told me i had to read a play, and its blurbs sounded promising, with words like “funny,” “demented,” “fury,” etc.

i’m finally sitting down to review it, but i’m warning you: i’m bad at reading plays, i’m even worse at writing about them.

there are three plays in this collection.

fine, i will try.

reading these plays made me hope jacobs-jenkins would write a novel someday. which sounds insulting, but is not that way intended. here is a play i wrote to explain:

ME: no thank you. i do not care for scones. i prefer muffins. do you have any muffins?

EXCELLENT BAKER: no, i only bake scones, but i am an excellent baker and they are full of things you like: cinnamon and blueberries and nuts and everyone else loves them. try one. (hands ME the scone)

ME: okay, fine, but i really do not enjoy scones. (eats of the scone, tentatively) okay, i’ll grant you—as far as scones go, this is pretty good, but if these flavors were in a thing that i like very much—say, a muffin—i bet it would be even better. will you make me a muffin?

EXCELLENT BAKER: no, i will murder you instead! (stabs ME) 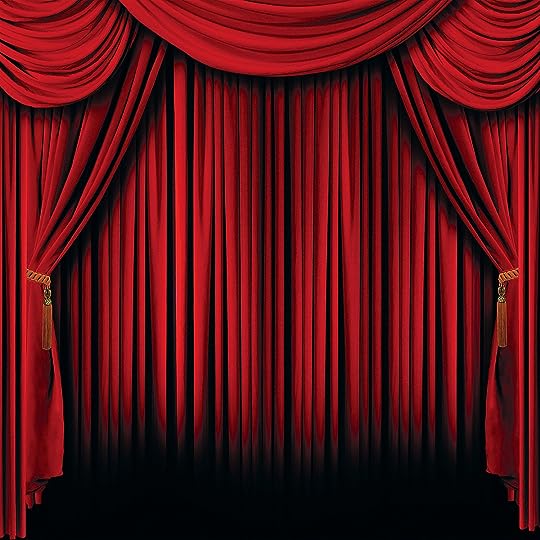 i like his writing, i like his humor, but i do not think i would enjoy attending a performance of these plays. however, i would be very interested in the how of it—again, i know nothing about theater, but these seem very ambitious, with elaborate stage directions that may or may not involve training rodents, and the expectation that the audience will be able to decipher what is meant by the volume and duration of recorded cicada-buzzing.

the stage directions my actually be my favorite part of these plays—i love how they deviate from the traditional or expected by being voicey, But I guess I worry about the whole thing becoming too Brechtian. Though, does it matter? Also, can I help it?, or poetic, Then moonlight happens, or vague, She takes a deep breath or something, or highly specific, Grace gets on the table holding her baby, which is, ideally, a white baby in blackface. they almost function like the footnotes in Infinite Jest—going off on their own journeys, not necessarily bound to what they’re meant to be explaining. his are full of asides, musings, and contradictions; details a live audience will never get to appreciate.

(M’Closky jumps up on his chair, throws money in the air, and makes it rain—perhaps literally, perhaps figuratively—the theater is a space of infinite possibility)

i’m torn between whether or not i would want to see these performed. i’ve probably gotten all the important bits out of the plays by reading them here in my home, but reading a play is a little like reading something in translation—you’re left with the feeling there’s a piece of the work you haven’t been given access to.

however, my experience of going to plays is that i will either become self-conscious or sleepy (or better—self-conscious or unconscious, because i definitely dozed off during that albee play i was dragged to).

these plays might be too modern for me to appreciate. they’re maybe more for the post-narrative theater crowd, folks who dig the “theater experience,” who wanna leave a play feeling slightly rattled. i know that these are a million miles away from *actual* experimental theater, but while i loved encountering all of the metafiction flourishes strutting through them, i simply don’t have the patience for any theater of discomfort stuff (which i am pretty sure is a thing that exists with its own specific rules and characteristics, but i’ve learned my lesson about wasting time googling shit), so i’m for sure using the phrase wrong, but i’m okay with that. i’m using it to mean maybe artistic discomfort? “is this meant to shock or titillate me?”discomfort. something the disrupts the narrative with…whatever you want to call it when a “mostly—if not completely—naked” man applies whiteface (body painting optional) onstage, which procedure “should go on for some time” before he “very, very slowly and very, very stoically” gives himself “a powerful wedgie.” which i suppose won’t be possible if the actor is completely naked, unless we are adding mime skills to the mix. i’m not offended by any of that, but i’m also not interested in paying money to see it if it doesn’t explicitly serve the story. if i wanted to see naked dudes do weird stuff, i’d just get on the subway. which is no doubt the theater-philistine equivalent of “my kid could paint that,” but i’m truly not sophisticated enough a theatergoer to get any value out of something designed to test or provoke an audience or make them question their expectations of theater’s possibilities or whatever shit like that is meant to do. i have no expectations to subvert; i’m a preschooler who wants to be told a story and given a juice box at intermission.

so although i enjoyed reading the plays, i think seeing them performed would range from excruciating—the first one with alla that yelling and the long monologues (okay, the one two-page monologue that seems long to me but maybe isn’t that long?), to exhausting: the third play’s energy and quickchange tone and long body-painting intervals. i suppose i’d goldilocks the middle play, but that can’t take more than twenty minutes to perform, so i’m not sure it counts.

anyway, here are some thoughts on the individual plays even though no one’s still reading this.

in which a shitty white family is revealed to be even shittier when racist family secrets are exposed. it’s like when you buy an onion that looks normal, but the rot starts just under the surface and gets worse with each layer. with each scene, each act, everyone’s behavior gets progressively more toxic.

so much yelling, by people and cicadas.

it ends with two pages of stage directions that i absolutely love and think is a perfect ending to such a corrosive play. it almost reads like a short story in itself, particularly the cicada part that opens it, and this is why i want him to write something i’m better at reading:

And we can’t understand any of it.

how is this conveyed? i don’t know, but the theater is a space of infinite possibility, right?

play #2: I PROMISE NEVER AGAIN TO WRITE PLAYS ABOUT ASIANS…

this is a six-page monologue, so there’s not much to it, but it’s sharp and angry and very funny and SPOILER ALERT it ends with blood pouring out of the actor’s mouth, with the stage direction:

This goes on for as long as it can.

this is a wild adaptation of a play by boucicault i have vague memories of reading in undergrad; an upgrade that changes everything from how it is cast—several actors taking on multiple roles, to some modern, anachronistic dialogue:

MINNIE: You ever thought of running away?

DIDO: Aw, hell naw. What am I going to look like running through this hot-ass swamp? Uh-uh.

MINNIE: I know, right? Grace’s ass always talking about running away now that Massa dead and I’m like, “Bitch, you need to calm your busybody ass down.”

as well as the addition of several scenes and characters along the way, decked out in metafiction and spectacle and bre’r rabbit cameos.

this is my favorite of the three, despite those things i know would annoy me, like the wedgies and the extremely loud music, &etc. but this one almost NEEDS to be seen to be appreciated. it’s confusing to read several actors playing multiple roles, sometimes in the same scene, and the visual effects and fourth wall-breakage are flatter on the page than they would be live.

but yes, this one was my favorite for the flaca-and-maritza relationship between minnie and dido; 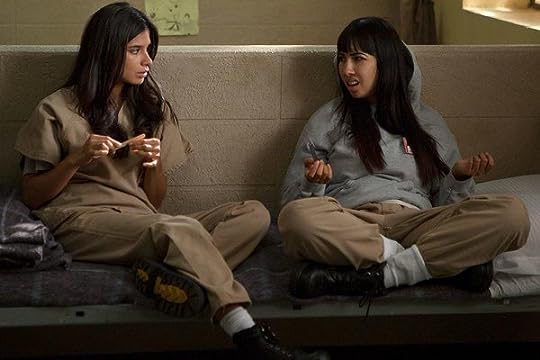 their bullshit and banter, their scramble to make sure they get sold together; they make an excellent comedy duo.

MINNIE: Girl, is it just me or has it been really quiet?

DIDO: You know, I was just thinking the same thing.

(As they work) Even all these white people are being really quiet. I wonder what’s going on today. I couldn’t read that sign out front, because I can’t read.

DIDO: I can’t read it, either. You know it’s illegal for us to read.

MINNIE: Yeeuh, but I was hopin’ you wuz one of them secret readin’ niggas. You know, like Rhonda.

however, this play’s more serious meta-scenes, where the playwright character gets to vent, are impressive and satisfying in a more lasting way, which is where i’m going to leave this “review,” because i’ve gone on a lot longer than i intended to, and i feel silly and self-indulgent, so here’re some words from an excellent writer who makes me wish i liked theater.

I believe an important part of being a good artist is recognizing your limits.
So I can respect the pussies who pussy out of a project.
I respect it when they get their “people” to be all like, “Well, such-and-such doesn’t really get the stuff about slaves.”
I’m like, “What is there not to get? It’s slavery.
And I’m not even asking you to play the slaves.
You’re playing the goddamn slave owner.”
I mean, God forbid you ask a black guy
to play some football-playing illiterate drug addict
magical negro Iraq vet with PTSD who’s
secretly on the DL with HIV but who’s
also trying to get out of a generic ghetto with his
pregnant obese girlfriend who has anger-management issues
from a history of sexual abuse—
in fact, everyone’s been sexually abused
and it all climaxes with someone’s mother having a
monologue
where she’s snotting out of her nose and crying everywhere
because she’s been caught smoking crack
and fired from her job as a hotel maid…

(I just made that up…Dibs.)

God forbid any actor of color not jump at the chance
to play an offensive bag of garbage
so far from his own life
but which some idiot critic or marketing intern is going
to describe as
a gritty, truthful portrayal of “the black experience
in America,” but the minute you ask a white guy
to play a racist whose racism isn’t
“complicated” by some monologue
where he’s like,
“I don’t mean to be racist!
It’s just complicated!”
he doesn’t return your phone calls?
Then my therapist was like,
“Don’t you think you ought to not shit where you eat?”
and I was like
“Well, what happens if I shit where I starve?”