All My Cats by Bohumil Hrabal
My rating: 2/5 cats

Somehow I had reached an age when being in love with a beautiful woman was beyond my reach because I was now bald and my face was full of wrinkles, yet the cats loved me the way girls used to love me when I was young. I was everything to my cats, father and lover. But the cat with the white feet and the white bib, Blackie, loved me most of all. Whenever I’d look at her, she’d go all soft and I’d have to pick her up and for a moment I’d feel her go limp from the surge of feeling that flowed from me to her and back again, and I would groan with pleasure.

Those mornings, when the five cats would crawl into bed with us, were moments of family bliss.

i know i’m going to get a lot of flak for this, and i know i am being unreasonable; having an emotional instead of an intellectual reaction, and the last thing i want to do is to be writing a negative review of a Very Important Author’s long-untranslated book coming out on a Very Respected Small Press five months before its release, but i’m an honest person, and at the end of the day, i’m just me: don’t let my experience prevent you from making your own reading choices. just…i think it is important to know what this book is before reading it. had i known, i would probably still have read it, but it is not the book i would have chosen to read at this particular time.

sometimes i am sad. sometimes i am stressed. sometimes i just want to read a short book about a man with a lot of cats who loves them an unreasonable amount to palate-cleanse my brain and give me some warm fuzzies, and i think that if a book is actually about a man overcoming his guilt over the many many occasions in which he put a cat or several cats into a canvas mail bag and swung them against a tree to kill them, followed by smashing their tiny heads in with an axe when the tree-bashing method doesn’t ‘work,’ maybe mention that in the book’s description, in as coded a way as feels appropriate, but in this day and age of trigger warnings and sensitivity readers, maybe at least put it out there.

and maybe they tried—the synopsis says that it is best seen as a sensationalized memoir that reads as a novel, the chronicle of a cat-lover who becomes overwhelmed by his cats and his life and is driven to the brink of madness by the dilemmas his indulgent love for the animals has created.

i had interpreted this “madness” brought on by the “indulgent love” of his cats to be the “crazy cat lady” type of madness—where cats take over the living space and humans sleep on the floor so that their cats may have a softer place to lay their weary cat bodies. NOT that a man would be plagued by visions of the cats he murdered and then—kill more of them.

whether this is fictionalized memoir or truefact is irrelevant. i have read incredibly graphic scenes of violence against people and animals before and been unaffected. but usually, i knew what i was getting into. if you’re a fan of grit lit, like i am, you know there’s gonna be some uncomfortable content. i just wasn’t expecting it here. i was expecting charming feline love, but this ain’t james herriot.

i am well aware that hrabal had a hard life, that he had emotional damage, that he eventually killed himself.* i am well aware than in the pie chart of “bad things that happened in the history of eastern europe,” a few dead cats would make up only a dieter’s slice.

but MAN, those poor creatures…kittens, pregnant cats, cats with whom he had established a bond, felt love for—it’s just brutal. and i’m even willing to consider the possibility that this is more metaphor than memoir, but regardless of whether this is something he “actually” did, these were not the kind of scenes i had anticipated encountering in a book with that charming a cover, 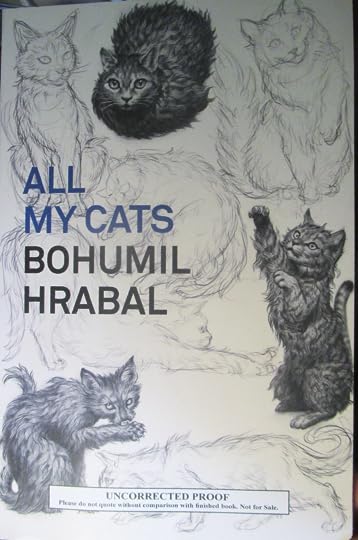 with this photo at the front. 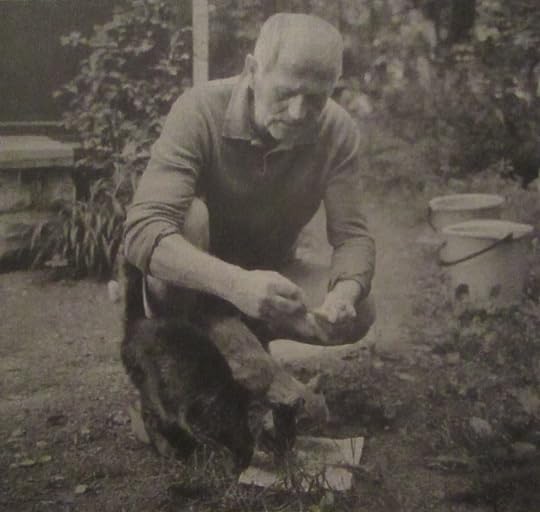 this was written in 1983, in a time and place where there were other options to thinning one’s feral cat herd. in fact, he lies about the manner in which they were dispatched, telling his wife that he brought them to the vet who employed chloroform. which makes it clear that he knew the old “put em in a bag and hit ’em a few times against a tree” method was not the only path, nor even the most effective/efficient method, as some of the instances will gruesomely attest.

that he—not compares himself to, necessarily, but references a few times—raskolnikov, does not make his guilt more profound.

that he buries them with flowers and headstones is no comfort when those headstones start racking up.

that he points to the lives of songbirds uneaten by cats as a half-assed excuse for their deaths does not absolve him. for me, it makes it worse, because—birds. shudder.

that he killed a pregnant cat because he was pissed at her for frightening a bunny to death one time while teaching her kittens about hunting does not justify his decision.

that he rhapsodizes over their deaths, fetishizing his guilt into the purplest of prose, mitigates nothing:

…once again I saw the eyes of the cats I had beaten to death, their reproachful eyes, eyes that had no idea I would kill them, eyes that knew they loved me. Their kittens had been born in my bed, they trusted and had boundless faith in me, they were happy only with me and in my house, and I had beaten them to death in a mail bag, like vermin. That they had brought me songbirds, or baby quail, or pheasant chicks, or little rabbits, was something they could not help doing because they were showing off their prowess, giving me a gift of their prey, and if that were so, then I should have had them shot, a game warden or a hunter should have come, someone other than me should have killed them. Thus I was guilty, not because I had beaten them to death but because I had murdered love. That was my sin.

to judge it solely on the writing, like a proper reviewer, it suffers from repetition. not so much his wife’s repeated wailed refrain of “what are we going to do with all these cats?” which punctuates the narrative frequently, yet works almost on a percussive, musical level, but—among other oft-recurring phrases and images—we hear about the ‘green handles’ of a left-behind handbag so many times. in context, it’s a chilling reminder for hrabal, but it doesn’t quite work as a motif, not even as a foil for that…other bag. i don’t know anything about this book’s publishing history—whether these 100 or so pages were cobbled together from notebooks or whether it was unfinished at the time of his death in 1997, and maybe the repetitions are a result of some hasty editorial process, but in a book this slight, they really stand out.

anyway, no, i did not enjoy reading this. it did NOT give me the warm fuzzies i needed to distract me from my anxiety over the neverending horror of world news coverage or my own life’s disappointments.

run from the bad man, kitties! 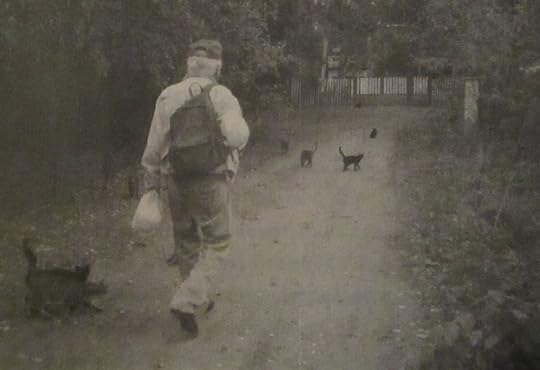 * the official cause of death is falling out of a hospital window while feeding pigeons (FFS), but i was almost certain he had killed himself, and in my very cursory research on the matter, apparently there’s some speculation about whether his fall was accidental or intentional, but in any case, he was for sure suicidal and thought and wrote about his own death and suicidal ideation frequently.