Alice Cooper Vol. 1: Welcome to My Nightmare by Joe Harris
My rating: 2/5 cats

in which we discover the answer to the age-old question: Does Alice Cooper actually give a crap about anything?

okay, so i am going to give this book a million stars for existing, but i can’t say i enjoyed either the story or the artwork. i love alice cooper. is this known? well, i do. but i have a pretty hard cutoff point, and it is 1978, with the release of probably my favorite of his albums, From the Inside. along with Alice Cooper Goes to Hell*, it’s a concept album, where the songs are connected to tell a story, which is just like chapters in a book and seven-year-old karen was BLOWN AWAY by this completely revolutionary way of presenting music. because seven-year-old karen loved books. nerd. and seven-year-old karen was approached by her daddy one day and he put these giant seventies headphones on her tiny little head and he played Millie and Billie for her (which may constitute child abuse in some states) but karen did not feel abused, she felt enlightened. this was music-as-performance, not unlike the 45 rpms of her little golden books. only much much bloodier. and from then on, i (because third person is lame) was smitten. i loved everything from the zappa/syd barrett weirdness of Pretties for You to the blood-splattered carnival of Welcome to My Nightmare. what i was responding to so favorably was his storytelling abilities and all the theatrical possibilities of rock and roll that would later lead me straight into the loving arms of queen, oingo boingo and the residents. there are some terrible songs on those early albums, sure, but the ones that are good are GREAT. and then the eighties came and everything started sounding the same and even young karen could identify a decline into self-parody when she heard it.

but so this book. this book is illustrated fanfic not unlike eighties alice cooper. it’s just…cheesy. i was really hoping it would be loaded with references—little tips of little hats to the fans, and that expectation was titillated when page one offered the line a realm left unattended…but hardly uninhabited, which sounded like a nod to “I may be lonely, but I’m never alone” from I Never Cry, but may not have been. i was probably just seeing what i wanted to see. there are some references: kachina, jesse jane, jacknife johnny, nurse rozetta, “the quiet room,” aemon price, who looks a bit like vincent price, etc, but they were unsubtle when i was hoping for easter eggs.

our dear alice leads a dual life. or maybe a treble life. he is a rockstar, yes, but he is also contractually obligated by the diabolical lucius black (of “clan black”—most lazily-named villains ever) to steal the souls of boy band members in vegas. he is also the “lord of nightmares,” existing in an alternative-plane fantasy landscape, and he’s kinda like a genie in a bottle, who can be summoned how, class? 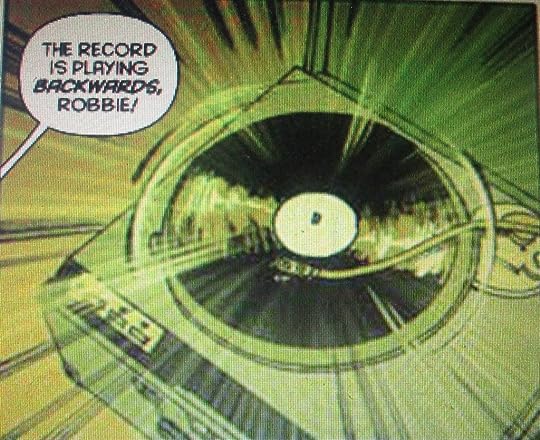 and once he appears he is bound to his summoner for whatever purpose they choose, such as to teach young children lessons about bullying. and such.

and also to have tea parties 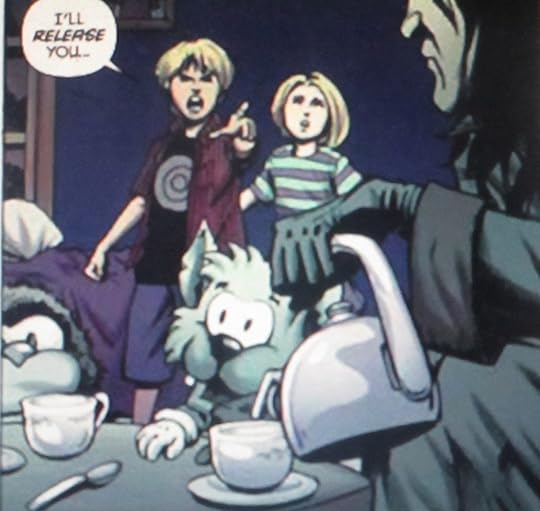 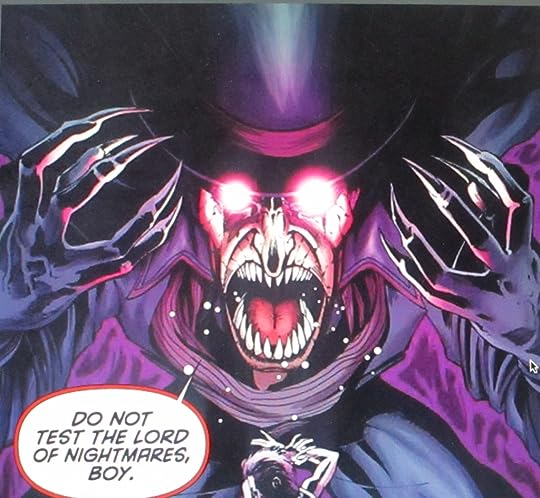 the book seems to know it’s a little silly, and it rolls around a little in the cheese. 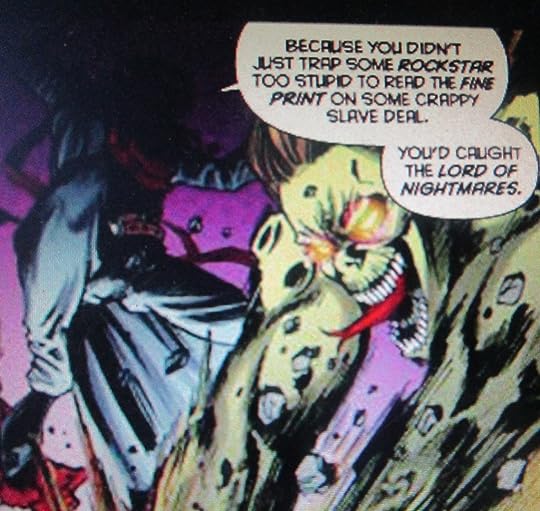 it can’t even curse properly, instead using silly fake expletives like “holy craparoni” and “my darkened stars!” and these: 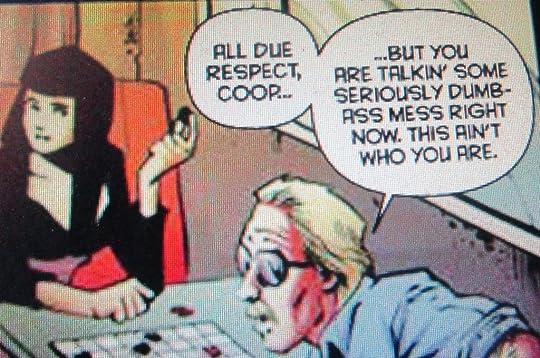 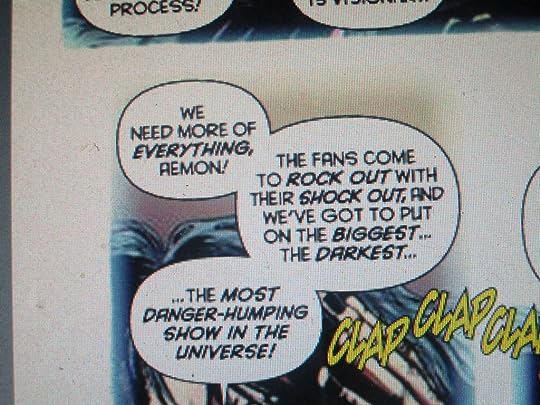 the worst of it is a villainous character who speaks in rhyme:

Cooper is bound. A new master he’s found. We don’t expect he would come easy. But from what we hear, that picture is clear and our stewardship would be considerably less cheesy.

there are some genuinely funny things, though: the nightmare lord discovers snapchat. 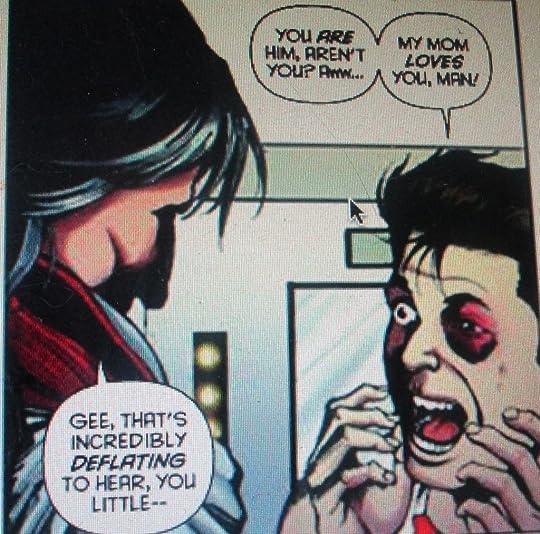 and this weirdness, which came out of nowhere: 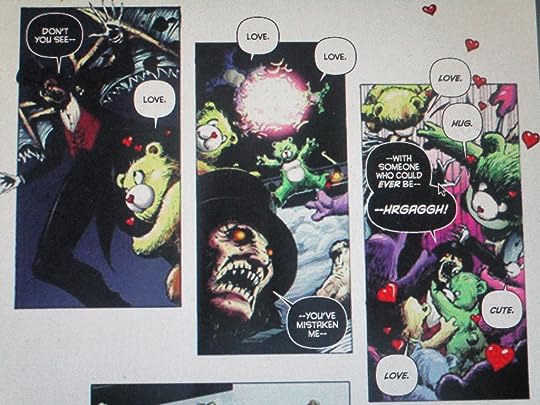 i thought some of the artwork was cool 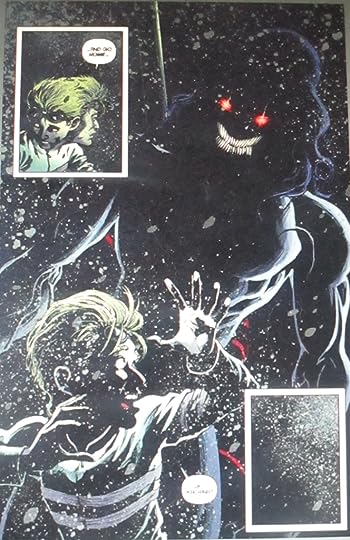 because “pecked apart by birds” is definitely a nightmare 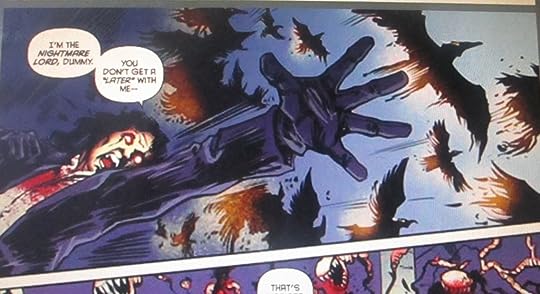 it’s a pretty decent story about hubris and ambition and having the best stage show ever, and the life of a rockstar in this realm or the other—the fame and the waning of that fame. but it’s still pretty silly.

and as soon as i reached the end of the story, i thought to myself, “someone should totally make a graphic novel of From the Inside.”

well, be careful what you wish for. because i kid you not, also included in this collection is that very thing, which apparently has existed since 1979, unbeknownst to me. 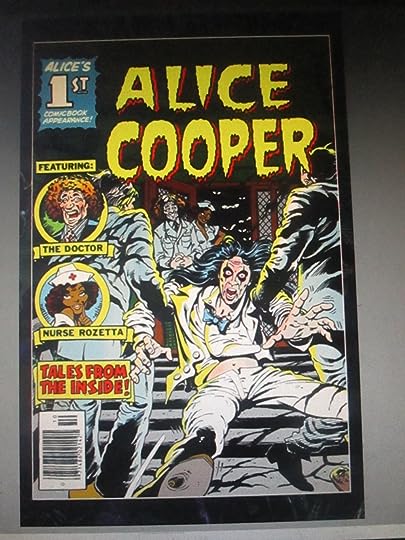 oh, and it’s terrible. it’s the worst kind of hokey slapstick and greasy sexual innuendo with characters from other comics roaming through the background and puns and other cringey things. and for some reason, in this comic, veronica is a snake. which makes no sense. everyone knows veronica is a dog.

not my favorite book, but i enthusiastically applaud the endeavor.

here is your alice cooper listening station, so you can hear some of my favorites:

you know you want to dance to this.

King of the Silver Screen

which i thought was sexy before i even knew what “sexy” was.

(No More) Love at Your Convenience

this is not on From the Inside, but it totally could have been locked up next door.

* and i wouldn’t fight you if you said Welcome to My Nightmare was also a concept album, although that one might technically be a rock opera. all i know is that it made one hell of a stage show. that i saw on teevee, not live like my daddy did, alas.