A Feast of Ice and Fire: The Official Companion Cookbook by Chelsea Monroe-Cassel, Sariann Lehrer
My rating: 5/5 cats

dude, are you still plugging that literary thanksgiving thing you did? it’s time to move on.

argh, i know, but i’m so slow to review books lately, and if i’m gonna put pictures in these cookbook reviews, it only makes sense to provide some context, so cut me some slack, yeah? here, i’ll put the link in a spoiler-tag so it is less obnoxious View Spoiler »http://bloggycomelately.com/literary-thanksgiving/ « Hide Spoiler and there’s only one more book to go after this so ppbblltt.

so, this is the official game of thrones cookbook. there is also an unofficial one—The Unofficial Game of Thrones Cookbook: From Direwolf Ale to Auroch Stew – More Than 150 Recipes from Westeros and Beyond , and they both look really good. i should probably buy copies of both of these because i was only able to make five little-bitty recipes because of project limitations and having to include other books like it’s some kind of grade-school birthday party, but there were bunches more i would have made, if the project had been “make a kickass game of thrones thanksgiving.” because having big special occasion feasts in game of thrones always goes SO WELL.

but so here’s what i made. none of them were complicated recipes and they were mostly just little nibbles, but i bookmarked a bunch of heartier recipes for future makings and if anyone’s looking for a caterer for their red wedding feast, look no further!

the wall—iced blueberries in sweet cream 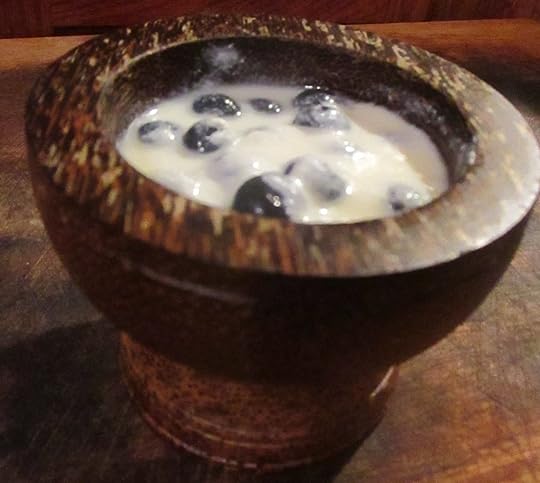 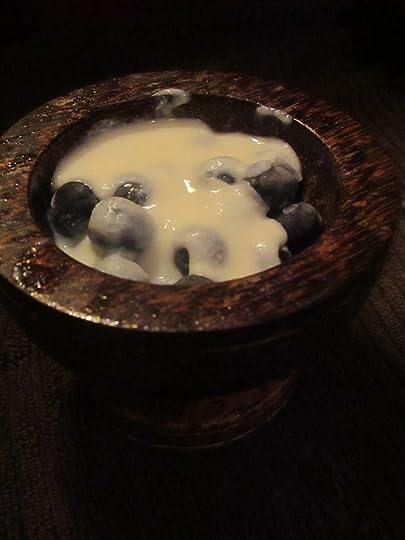 like i said, not the most complicated recipes. but honestly, if this is what they are eating up on the wall, i could throw on a black hoodie and hang out up there. and seriously—the jon snow hoodie is so cute: 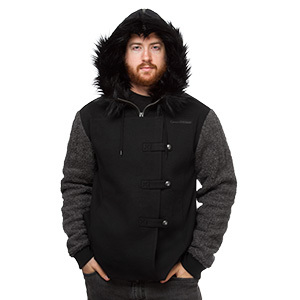 you got your antioxidants and your phytonutrients and your sweetish creamy sauce. and served up in my wooden mortar? super stylish. 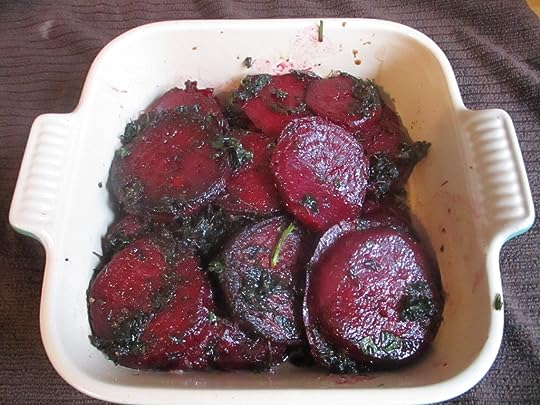 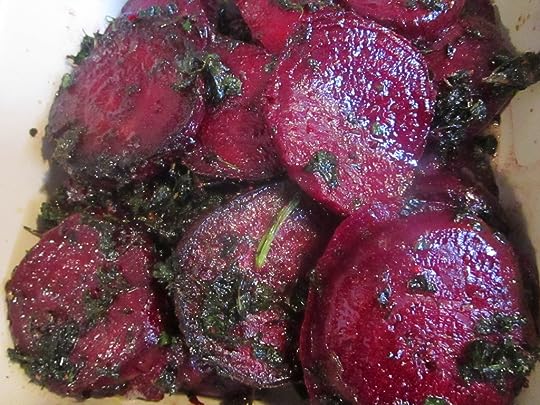 if you like beets, you will like these. it’s literally just beets, butter, parsley, and balsamic. so, they are super-delicious because all of those ingredients are super-delicious, and if you eat enough of them you can totally turn your teeth red for a little while and pretend to be a direwolf. not that i did that. much. 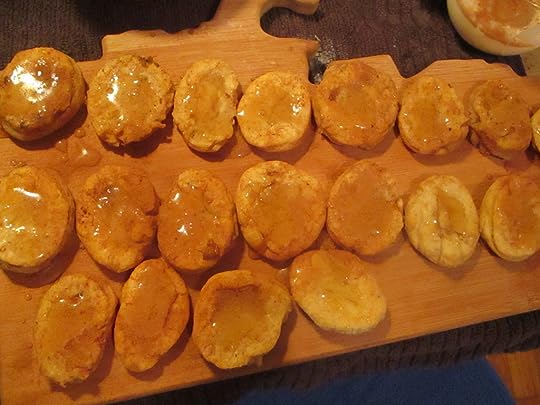 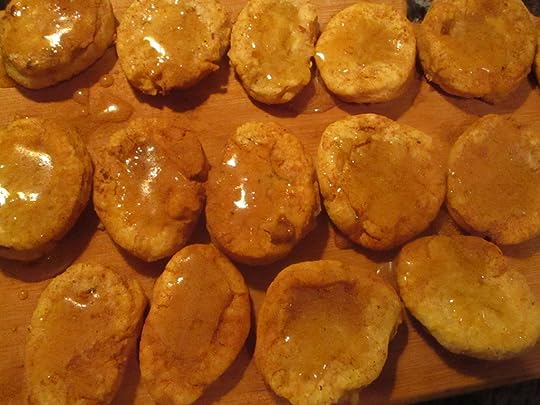 these really surprised me. i didn’t think they were going to be tasty at all, since they were very unspectacular in the ingredients department. i was pretty much convinced they were gonna taste like communion wafers (or satellite wafers, if we’re being secular) 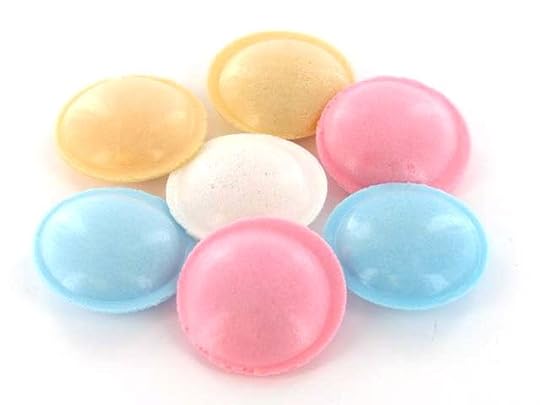 but they were pretty damn good! they aren’t gonna be the star of the bake-off or anything, but they have a really nice mild flavor of honey and cinnamon and…dough…and they are good both warm and room temperature. sean gaffled these up very quickly, so it’s a good thing the recipe made so so many. 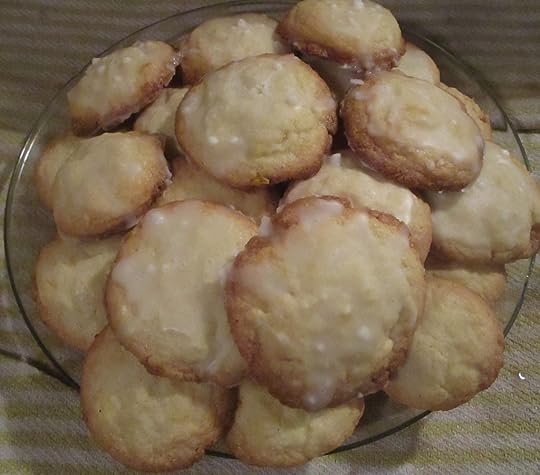 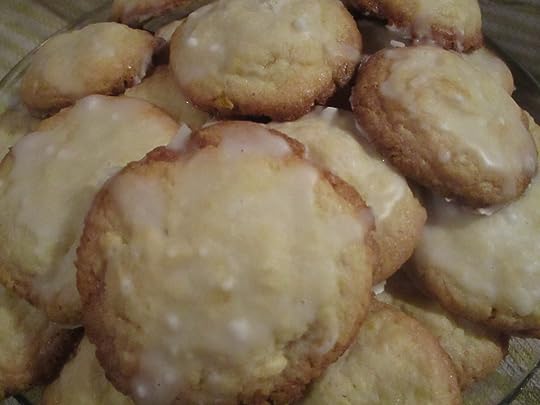 these were greg’s favorites, not surprisingly. here’s what’s weird about these cakes that let’s be honest, are totally cookies. they are fantastic when you eat them all warm and freshly glazed and you’re like I WANNA LIVE IN KING’S LANDING TOO PLEASE but then you have to go and make like seven other dishes and when you come back and try to snack on another one it has hardened into a lemon-flavored rock. and you just shrug and say “oh well, at least it will photograph well” and sean doesn’t care—he’s just crunching away on them in the corner with his teeth splintering but then the next day they are back to nice soft cookie texture. i don’t know what mystical properties i accidentally baked into these cakes cookies, but there’s your warning. which makes sense, because everything that comes from king’s landing should also come with a warning. 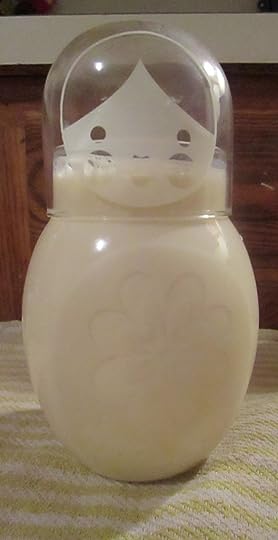 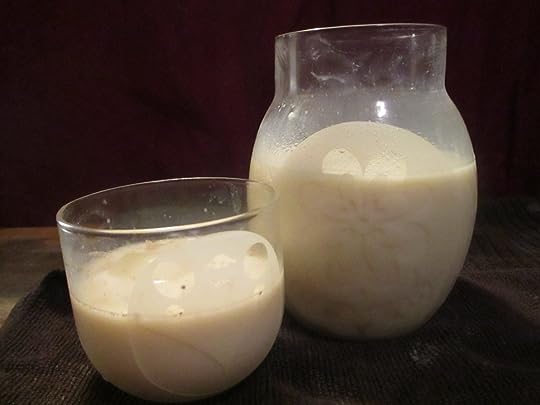 strangely delicious for basically just being honey and milk and cinnamon and octopus-shaped ice cubes. i couldn’t stop drinking it until my body finally sighed and started banging the pipes with its LACTOSE INTOLERANT DOWN HERE THX! rudeness.

and those are the foods i made from that book. i will try more recipes after holiday baking tornado passes.

brace yourself. dinner is coming.