She lumbers toward me through the oiled dark, breathing hard, and all I can think is: I wonder how we’ll look when they find us.

it’s all about the haunted house at 25 trumbulls road; each of the five chapters recounting the experiences of a different family inhabiting the residence over the years, whilst also maybe being inhabited themselves in turn.

this book is exactly what i thought Guestbook: Ghost Stories was going to be before i read it—creepy and sparse and suggestive—the kind of horror that stands behind you whispering in your ear. Guestbook: Ghost Stories is a beautiful objet and its content was occasionally unsettling, but it was almost exclusively the read-between-the-lines brand of unsettling. a lovely, disquieting book for sure, but not quite horror. with this one, even though there’s ambiguity and offscreen action and plenty of gaps with things left unsaid, there’s enough context to string together the overt and the unspoken into actual horror, engaging you-the-reader in the process in a way that makes you feel affected, perhaps even a little haunted yourself.

these are the chapters:

which of course begs the question(s) “why these five specific cases?,” and “who is recording or documenting these incidents, and why?,” and “what the hell happened between april 2005 and july 2006 to cause such an escalation of incidents?,” etc.

each of the five chapters are broken up further into segments marked exhibits; chunky paragraphs of narrative like little prose poems, which themselves include gaps; for example jumping from EXHIBIT 2 to EXHIBIT 5, occasionally including an exhibit and its number with the text redacted, pockmarking these 22 pages with lacunae whose creepy details you’re gonna have to fill in on your own.

to get you started, here’s the book’s opening paragraph:

EXHIBIT #1 The first night in our new house, I had a dream about a woman who lived under the floor. She smelled raw and cried as she pulled her body between the wide pine planks. I wanted to help her but felt that would be rude somehow. She quieted when she took me outside the house, which miraculously looked exactly like the one we just moved into; our real cars were in the driveway, my real cat was silhouetted in the upstairs window, licking its paw. She brought me into the nearby woods and seated me atop a stump. I watched as she shuffled around a great, gnarled apple tree, humming, dragging her damaged feet. She stopped abruptly and turned toward me, opening her mouth wide. When I woke up, I felt unusual, almost heartsick. The morning was glorious, and my daughter Sophie asked me to join her outside after breakfast to explore our new neighborhood. We went into the woods, discovered an abandoned doll house with three little beds, each bed holding only the head of a doll, nothing more. We kept going, pushing at brambles and dead pine, until we happened upon an apple tree. Around the base of the tree was a muddy, worn path. I felt the blood leave my face, and I could hear music not far off.

what happens in EXHIBIT #7? hint: it, too, involves dolls and dolls are never NOT creepy. 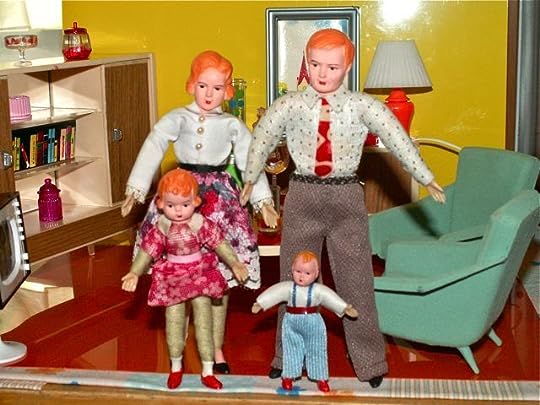