You Die When You Die by Angus Watson
My rating: 4/5 cats

this book has been flirting with me for a while now. and i’ve been flattered – i love its cover and there’s something about the font that pleases me deeply, but our coy little dance always followed the same pattern:

“ooh, that cover kicks ass. that font is fun. why haven’t i bought this yet? *turns over book* 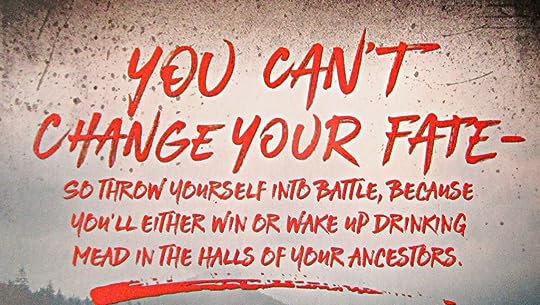 this cycle transpired several times: i would be drawn to it without remembering why i had determined it would never work out between us, focusing on the “meh, combat” stuff that i’ve never sought out in my reading life, totally ignoring the words like “battling animals and monsters,” “gore soaked and profanity laden,” and “unflinchingly bloodthirsty,” which is all stuff i DO like*, and putting it down regretfully.

and then the author came into the store, being all affable and you know me – i’m powerless against the affable, so i bought the book, i read the book and dammit if i didn’t enjoy the book.

it’s wayback historical fiction about a group of vikings who have been living in north america for generations, isolated and essentially living as a “kept town” by the goachica, a tribe of indigenous scraylings. the goachica provide them with food and protection, but put limitations on their movements, like an invisible cage for their pet mushroom men. which is how the pale-skinned vikings are known to outsiders. to themselves, their town is called hardwork and they the hardworkers.

having lived this long in a bubble, the hardworkers have become incurious and complacent, although they still maintain a group of well-trained fighters called the hird, who are as badass and attuned to each other as you’d want even if you weren’t just sitting around in peaceful captivity. which is fortunate because after years of protection, a prophecy is revealed to the most powerful scraylings – the calnians, that the light-skinned people are going to bring destruction to the world (truefact), and they order the goachica and the other scrayling tribes over which they rule (i.e. – all of ‘em), to kill any mushroom men on sight.

“you die when you die” is the shrugged philosophy of the hardworkers, who believe that death is just a doorway to glory and a ticket to sit beside the gods, so despite the enormous number of horrific bloody deaths here, no one is over-fussed by them. deaths by bears, tornados, arrows, knives, arms ripped off, living folks torn in two by bare hands, eyeballs extracted, thrown off cliffs – every day brings its own challenges, right?

it’s more of an adventure story than one focused on war, although there are many fighting scenes. there’s plenty of humor, much cussin’ and even some sharks! the POV shifts frequently, giving a full picture of this world; its traditions, magic, mythology, and politics, from various angles – hardworker and scrayling and all manner of shading within. it’s a bit confusing at first – so many names and perspectives coming at you before you’ve settled in comfortably, but it comes together pretty quickly. finnbogi the boggy is the most frequent narrator, but also the least interesting, to me. he’s a young man of the hardworker people, neither fighter nor thinker nor much of anything. he’s still finding his place and his purpose, but mostly just trying to get laid. preferably by thyri treelegs, a member of the hird who is way too cool for his gormless ass. he gets better as it goes on, but i would trade any of his chapters for more from the owsla – a group of magically-enhanced female warriors sent from calnia to hunt down any mushroom men who have slipped through the cracks and escaped the massacre.

this is just the first book, and there’s a lot of material left to chew over in the next, The Land You Never Leave. this doesn’t end on a cliffhanger, per se, but it ends on a big big setup for book two.

so, even though this book has a map, it lived up to the promise of that font, and now we are in a happy and committed relationship and i’m looking forward to our next step together. which will be published in september.

* you would think a fan of blood and carnage would like war books, but i don’t. i think it’s about context? like, you expect there to be a lot of that in war, but i think it’s more fun to have all that splatter sneaking into the unexpected places. connor said the other day that he didn’t understand the way my mind worked because of some unrelated but totally valid distinction i was making between things, and this may be a part of it. my brain doesn’t always make sense, but it’s the only one i’ve got.