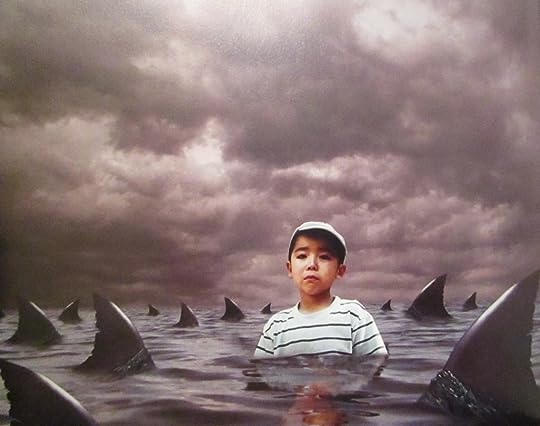 first of all, let’s take a moment to celebrate the amazing erica, who sent me this book along with this note: 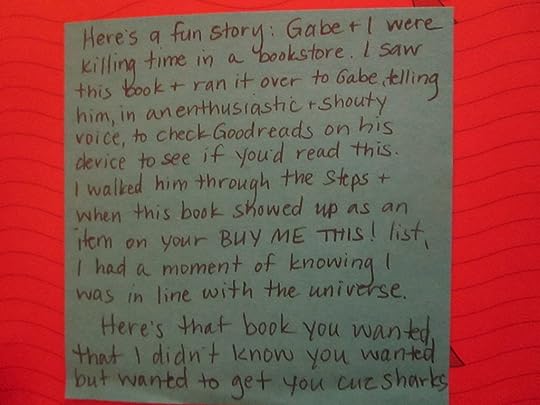 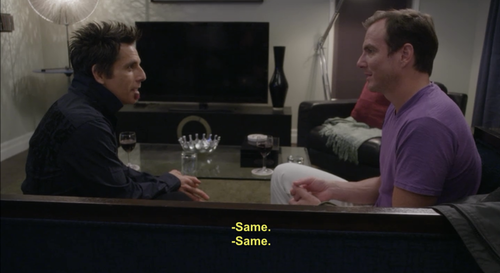 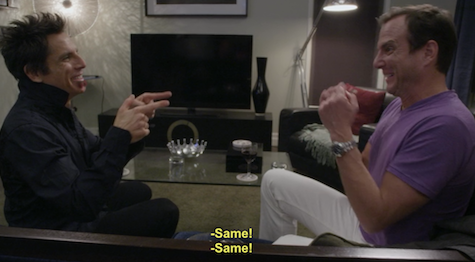 and now let’s learn about sharks!

this is the companion book to 100 Facts About Pandas, and since you haven’t read this book, you probably don’t know that there’s actually some overlap between the two creatures, according to fact 15: 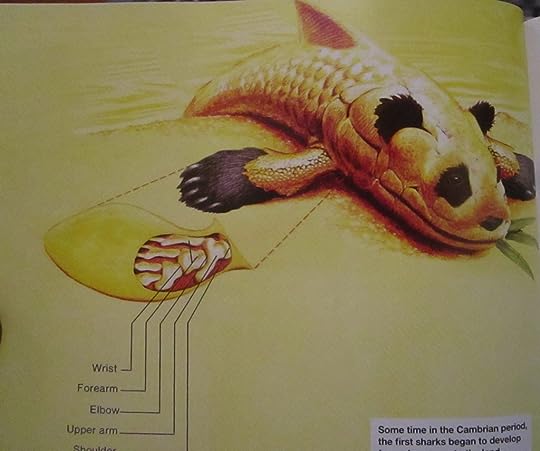 Genetically, the land animal that the great white shark most closely resembles is the giant panda. Their digestive tract and cerebral cortex are almost identical, and the two share a common ancestor in the zebra trilobite. Around 300 million years ago, a single gene mutated into an adorable and a ferocious form, and the two separate species began to evolve.

and then there are 99 additional facts!!! here are twenty-three of them. do not be confused by all the british spellings – it’s just this book’s way of making itself look all smartypants like it’s andrew marvell or something.

One of the greatest mysteries of the shark is its pathological fear of the kitten. A kitten’s scent, its plaintive meow or even the briefest glimpse of one is enough to get most sharks hurrying in the opposite direction.

6 In The Feline Of Fire

The arrow shark is the only flammable shark. Its skin is covered in an oily resin that may be set on fire. The ancient Greeks knew of this property and would shoot flaming arrow sharks on to enemy decks during battles at sea. As a defence against such attacks most ships carried kittens onboard, and would fire baskets of them back at the Greeks. This is believed to be the derivation of the word catapult

The musical West Side Story concerns the rivalry of two gangs on the streets of New York: the Sharks and the Jets. Unfortunately neither group were helped by their namesakes when, on the 1969 tour of South America, the jet engines failed on the cast and crew’s aeroplane off the coast of Uruguay, and they were all devoured by whitetip sharks.

Sharks can withstand many substances that are poisonous to humans, including arsenic and strychnine. However, if a shark is fed even the smallest amount of Coca-Cola, it will explode.

At over 6 metres, the giraffe shark is the longest shark on earth. It is also the only shark with eyelashes. 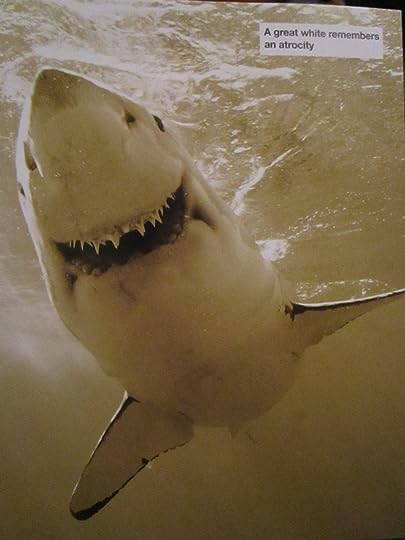 Sharks are the only animals with no sense of humour whatsoever. Although they are occasionally glimpsed smiling, this is reckoned to coincide with nostalgic reminiscences about gruesome murders they have committed in the past.

The etymology of the word shark is the subject of much debate among sharkeologists. Some believe it is derived from the Arabic sh’aak meaning ‘nightmare death submarine.’ Others believe it comes from the Aboriginal word sharriji meaning ‘ungrateful friend.’ Some scholars believe it may derive its name from the fact that these specific letters, when put in that order, look quite like a shark.

23 Sharks: Not As Bad As Nazis

Hitler saw sharks as nature’s embodiment of his Nazi ideal: a ruthlessly efficient master race that ruled the blue planet. However, sharks proved reluctant to participate in his propaganda. In a demonstration at the Munich Rally of 1937 of how stronger races are supposed to overwhelm weaker ones, a shoal of tuna were dropped into a huge glass tank containing Patrick and Natasha, a pair of 3-metre blue sharks branded with the swastika. Perhaps due to the ill-treatment they had already received or maybe sensing pity for the tuna fish, the sharks refused to cooperate and instead befriended their tank-mates, sharing food and allowing them to ride around on their backs.

A furious Hitler later had them taken out and shot. 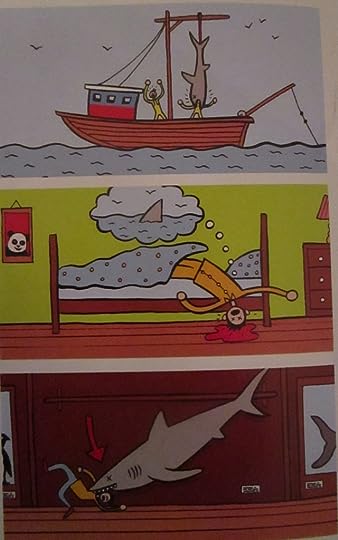 Nine out of ten shark attacks take place in water. Of the other 10%, the most common scenarios are on the decks of fishing boats, stuffed sharks falling from their mountings and crushing people in museums, and people falling out of bed during shark-based nightmares. 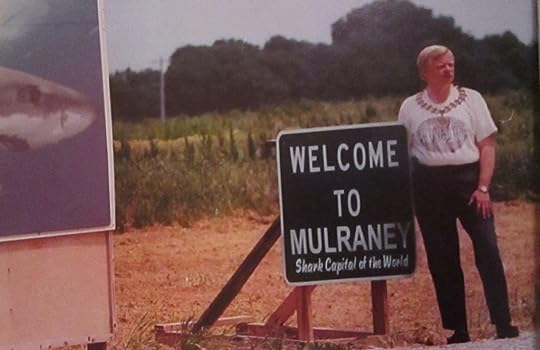 In an attempt to attract tourists to the town of Mulraney, Rhode Island, in the mid-1980s, Mayor Grover Pelmet renamed it Mulraney: Shark Capital of the World. The problem with this claim was that not a single shark had been spotted in the waters off the town in the previous hundred years, so single-handedly Pelmet began a campaign to attract sharks to the area. He secured bags of rancid sausages to the underside of boats in the harbour and even attempted to fit rubber shark-fin prosthetics to the family of dolphins who lived in the bay in the hope that it would attract other ‘sharks’.

His exertions began to take a toll on his mental health, and the last straw came when his wife found him 10 metres off Mulraney Strand late one night covered in gravy shouting, ‘Hello, boys, I’m a lady shark.’ He retired from the mayorship soon after.

(i can vouch for this fact. grover pelmet is rhode island’s favorite son and his face is on all of our currency)

The make-out shark dwells in the tropical waters of the Pacific Ocean. It is similar in appearance to the great white shark, but has no teeth and feeds only on krill. The make-out shark is a curious and friendly animal that investigates other creatures by rubbing its mouth up against them, hence its name.

Despite having no desire or ability to eat humans, the make-out shark has been responsible for more deaths than its carnivorous cousin, as encounters with them usually result in heart attacks.

Sharks freeze solid at minus 29 degrees Celsius. Once frozen, a shark is very brittle and will shatter easily. This is reckoned to be the most humane way to destroy a shark.

The ceremonial smashing of the shark is a tradition at Jewish weddings in polar regions. The bride and groom throw the frozen shark off the roof of the synagogue, symbolising that, together, their love can smash a shark.

In the 1930s, low literacy levels in Colombia led the government to introduce one shark per school to be used as a tool to encourage children to learn to read. The threat of being fed to or even just made to stand beside the school shark resulted in a generation of diligent students, including 1982 Nobel Prize Winner Gabriel Garcia Marquez. Unfortunately, this generation also suffered from abnormally high anxiety-related conditions. Garcia Marquez is rumoured to have written his epic novel 100 Years of Solitude in a sleepless two-week frenzy of writing in 1966.

When Colombian singer Shakira is struggling to finish a song, she purportedly uses a technique taught to her by her father of imagining there is a shark in the corner. This is believed to account for the numerous distressed yelps she includes in her songs. 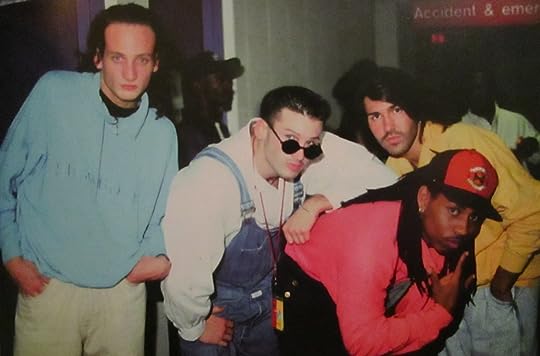 Celebrities frequently claim to have been involved in shark attacks in order to toughen up their public image. In 1995, vocal group Color Me Badd claimed to have been set upon by bull sharks as they swam at Glenelg beach, South Australia. According to group member Donnie Wetherspoon, ‘We formed a human diamond and sang till we had calmed them down.’ The incident gained the group much publicity, especially as it coincided with the release of their No Bull remix album. However, drama turned to scandal when marine biologists pointed out that bull sharks are not found in this region, and the group was forced to admit to fans that they can’t even swim.

The reason sharks often swim with their dorsal fin out of the water is because this fin is allergic to salt. When submerged, the fin is very itchy but air has a soothing effect on the irritation. This constant state of discomfort is one of the reasons why sharks are always so angry. 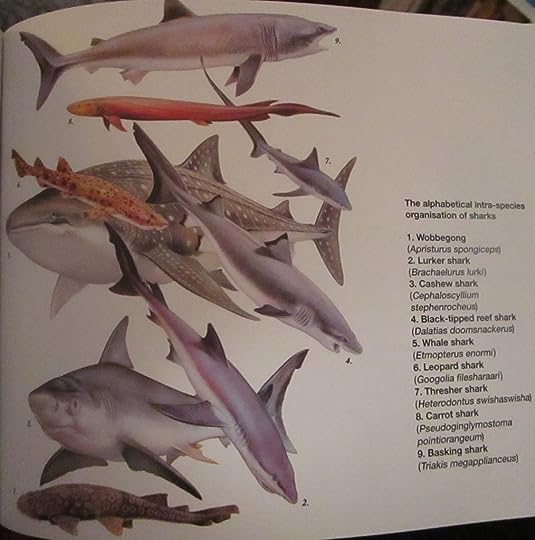 When different shark species arrive at the same feeding ground, they line up in alphabetical order of Latin name to take turns eating. Scientists have no adequate explanation for this behaviour. 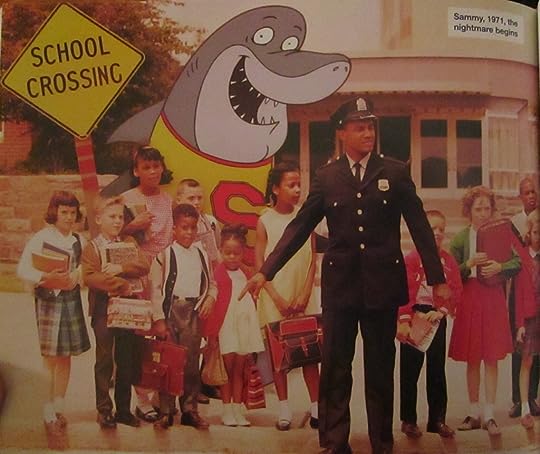 The least successful government information slogan of all time is the Canadian government’s 1971 ‘Sammy the shark will help you cross the road’ campaign. Unfortunately its launch coincided with several high-profile shark attacks on the nation’s beaches and Canadian children simply refused to cross the road. School attendance plummeted and the government was forced to launch a new campaign with the slogan, ‘Sammy is dead, children, everything is OK now.’ To this day, Montrealer Celine Dion will only cross roads at great speed.

83 There Will Be Sharks

Brazilian fishermen were astonished to find the actor Daniel Day Lewis alive inside a great white shark caught off Rio in 1998. The star of My Left Foot was in a suit of armour, using scuba apparatus to breathe. He had allowed himself to be swallowed by the shark five days before in order to prepare for his vocal role as Mr Sharky T. Shark in the upcoming animated children’s film Mr Sharky’s Awfully Big Ad-FIN-ture. 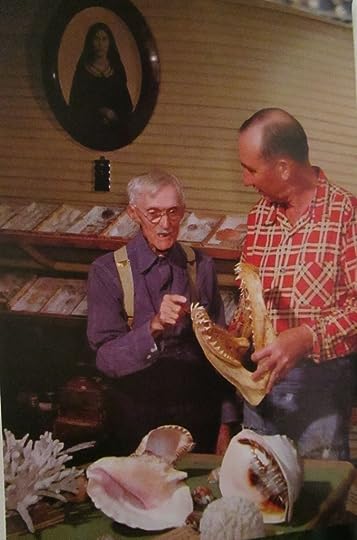 Until the 1950s, shark jaws were often used as dentures. Florida’s George Brennan had the unique claim of using the same set of teeth to chew his food that had eaten his wife, Betty. 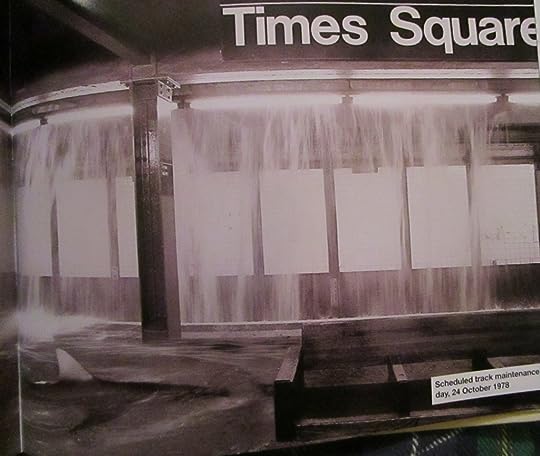 New York’s subway system is one of three public transit systems in the world open 365 days of the year. However, for 14 hours on the 24th of October, the entire system is closed for ‘scheduled track maintenance’. This maintenance consists of flooding the network of tunnels and releasing Caribbean pigeye sharks to eat the rats. At the end of the 14 hours, the subways are drained and the sharks are released into the Hudson River. This method reduces the pest population by a dramatic 72% every year, but conspiracy theorists worry that it is leading to the evolution of shark-resilient megarats.

(i can also totally vouch for this one.) 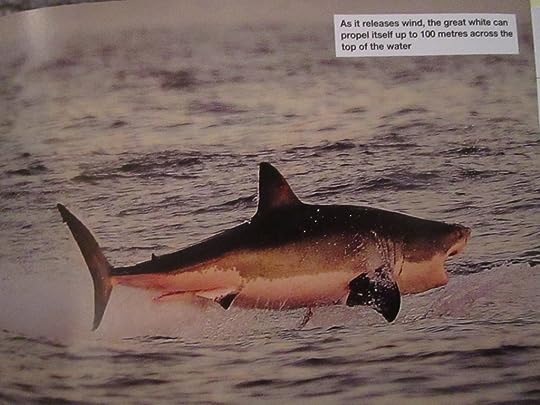 Scientists have finally established the reason why certain sharks leap out of the ocean, performing elaborate gymnastic twists before crashing back into the water. It had been thought to be part of a mating ritual, or perhaps a way of shaking off sea lice. In fact it is to get rid of trapped wind. Sharks are susceptible to this form of indigestion after eating pufferfish, aerosol cans and certain kelps. Great white farts are often mistaken for foghorns by boats at sea.

Of all animals that have been taken into space, sharks are the least useful. Their compact internal organs stand them in good stead when it comes to dealing with the lack of gravity, but their desire to eat through cables and kill astronauts more than outweighs any potential benefits. Cynics argue that NASA’s entire Sharks in Space programme is more about selling merchandise than any scientific research. SiS posters, key rings and lunchboxes have been NASA’s number one source of non-government revenue since 1986. 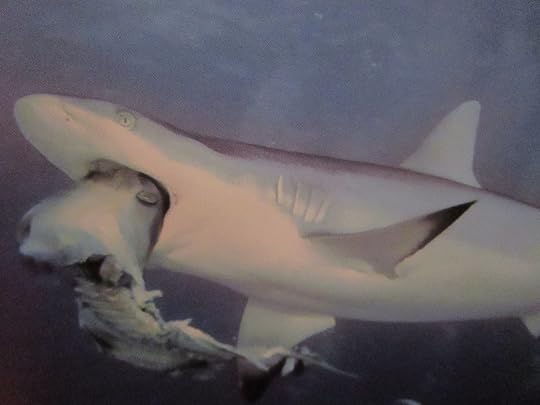 The lurker shark mates for life. However, as mating always ends with the female biting the male’s head off, this isn’t a huge commitment.

other features of note are the sweet dedication:

To our parents.
And Sharks. 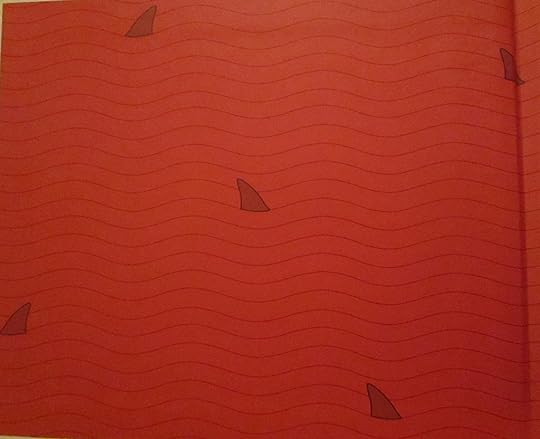 Great whites sometimes spoon for weeks at a time.

and this fun game i just made up for you called make up research a fact to go along with these pictures! 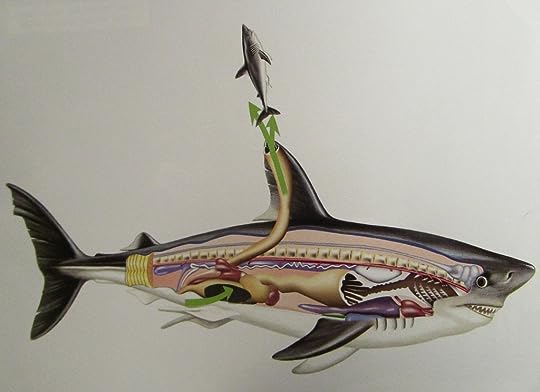 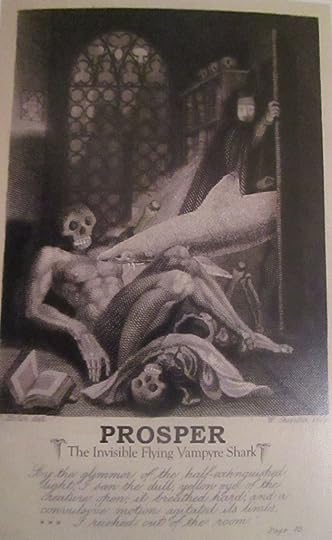 and thank you forever, erica!